Students Rally For, Against Gay Marriage 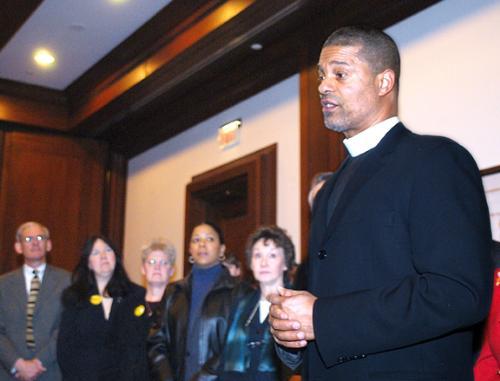 Campus political activists, including the incoming Undergraduate Council president, took their cases on gay marriage to the Massachusetts State House this week.

Harvard contingents turned out at attending competing rallies supporting and condemning the cause in response to the Mass. Supreme Judicial Court’s November ruling that a ban on single-sex marriage violates the state’s constitution.

The decision, which would enable gay couples to ask for marriage licences starting 150 days from now, has spurred a backlash. Some are now calling for an amendment to the state constitution which would ban gay marriages.

“In America, people seem to think that if you want to do something and you get pleasure out of it is acceptable,” said Mike Lorelli, a second-year student at Harvard Law School who attended a rally organized by the Massachussetts Family Institute on Wednesday. “We think that marriage between a man and a woman makes biological and moral sense.”

Yesterday’s rally in favor of single-sex marriage drew approximately 1,000 people, according to organizers. Included in that figure were at least 50 Harvard students, according to attendee and Undergraduate Council President-elect Matthew W. Mahan ’05.

Participants, who mostly refrained from chanting, spoke instead with signs reading “Ontario Did it and So Can We” and “Vote No on Anti-Gay Amendment.”

Karen R. Taylor ’06, who e-mailed fellow students encouraging them to attend yesterday’s rally, writing “we can’t let our opponents bully the legislature,” said the crowd at the event was varied.

“People were mostly middle-aged, but there were a fair amount of young people,” she said. “I think young people are more liberal in general.”

Mahan said that he was pleased with the “substantial” Harvard turnout.

“The BGLTSA had a group going, but there were a lot of others not affiliated with them too,” he said.

Speakers at yesterday’s rally included an interracial gay couple from the Mass. Supreme Court case, a gay couple who would be celebrating their 49th anniversary in May, senators, legislators and one Protestant and one Anglican minister who expressed the support of their parishes for gay rights.

Taylor said the most touching moment of the program “was when this man who was part of the court case spoke. He was black, and his partner had a heart attack. When the ambulance came, they accused the man of either murder or breaking and entering and then refused to let him sit in the ambulance. It’s dreadful.”

Lorelli, who was brought to Wednesday’s pro-family rally by Bronwen McShea ’02, a first-year graduate student and Teaching Fellow at Harvard Divinity School, said he was impressed by the event.

“There was a nice showing of solidarity, and a good diversity of people supporting a cause we believe in,” he said.

Last Sunday, McShea said, she heard her pastor speak about a letter the archbishop wrote asking Christians to lobby against the court decision.

This week, she said, she began a web site containing the addresses of senators, speaker of the Mass. House of Representatives and the governor, and petitioned her friends to go rally with her.

Though McShea said that efforts to ban gay marriage among Harvard students have been organized by individuals, Lorelli said most of his Harvard friends who agree with him are Christian and “most are Catholic, although there are certainly exceptions.”

Lorelli and McShea joined a group of about 200 people at Wednesday’s rally, according to an NPR estimate. Participants held signs which read “stop the runaway court,” and displayed the symbols that represent males and females.

“Many people, even young people, gave us the thumbs up or honked,” he said.

“People recognize that it’s discriminatory to not allow any kind of legal union. It’s about civil rights,” he said. “But even at Harvard, I think most people prefer civil unions to marriage.”