Theater Review: Venturing into the Underworld 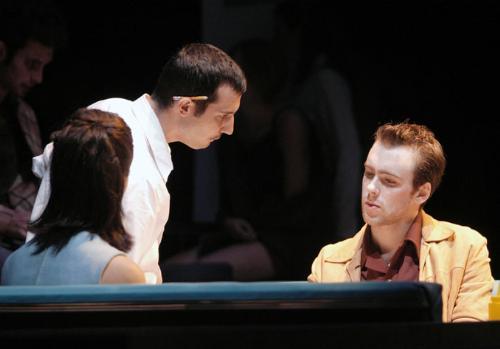 Left to right, Darlene (Liesje A. Hodgson ’08) and Joe (Sean Fredricks ’07) the drug dealer attempt to make love and a living in Balm in Gilead’s New York.
By Patrick D. Blanchfield, On Theater

The HRDC mainstage production of Lanford Wilson’s Balm in Gilead (directed by Scott Zigler, co-directed by Ben D. Margo ’04) is solid, entertaining, and professional theater. Set in ‘an all-night coffee shop on Upper Broadway in New York City, October 1965’ Gilead offers a snapshot of a grimy metropolis populated by lowlifes and outcasts, all struggling to make a living and deal with the sadness of their lives. In the middle of the mess of it all, a young prostitute and a reluctant pusher find each other and make a stab at happiness, their tragic story played out alongside vivid characterizations of other denizens of their world. Much this is accompanied by Velvet Underground music, particularly the first few minutes of Lou Reed singing “Heroin”.

So, fine, the script is middling. However, Gilead is marked by extremely good acting. Sean Fredricks ’07 turns in a convincing performance as Joe, an up-and-coming young blade who has found himself in over his head pushing for a ruthless syndicate. Joe’s mood swings—guardedly tender one moment, ambitious another, and occasionally terrified—are earnest and comprehensible, and Fredricks does a commendable job portraying the complexities of a weak personality under stress. Slightly less can be said of the female lead, Joe’s love interest. Though Liesje A. Hodgson ’08 is dealt a pretty bum hand in the character of Darlene, the shy, not-so-bright, doe-eyed Midwestern girl who winds up in the Naked City, her tender heart and emotional wounds standing soft relief against its jagged skyline, she also doesn’t do a very good job acting it. Despite Zigler’s legendary ability to teach and refine his actors, and though his risky choice of a freshman should be commended, Hodgson’s acting, though it shows potential, is only so-so. Though some of her scenes paint a compelling picture of reticence and need—her rapport with Fredricks in their earlier interactions (initially, he tries to deal to her) becomes surprisingly touching and believable—Hodgson has a hard time generating the presence she needs to carry scenes on her own. This is particularly noticeable during her prodigiously long monologue in the beginning of the second act, which was marked not only by the poverty of the script, but by Hodgson’s difficulties projecting her voice and persuasively deploying emphasis.

The other actors all turn in excellent performances. The café and its environs swarm with varied forms of lowlives, all of which are vividly and entertainingly portrayed. The drunks (Daniel R. Pecci ’08 and the particularly good Simon N. Nicholas) mingle with hustlers (Liam R. Martin ’06, Mike G. Jordan ’08, Jason M. Lazarcheck ’08, the admirably sleazy and slick Rob D. Salas ’08 and Rupak Bhattacharya ’05, who delivers a poorly-written monologue very well), prostitutes (Alexandra C. Palma ’08 and Carla M. Borras ’05) junkies and others in creating a convincing atmosphere of 1960’s urban decay. Three standout supporting actors are uniquely worth mentioning. Bobby A. Hodgson ’05 is wonderfully frenetic as the aptly-named Dopey, who delivers a sparkling and drug-crazed monologue, and Josh C. Phillips ’07’s burnt out heroin-addict Fick is both hilarious and sad. Scottie Thompson’s Ann, a dragon-lady salt-of-the earth working girl, is also excellent: when the second act opens to Ann smoking a cigarette in quiet café, her back to a bear yellow wall, her bearing is that of a woman in a (racey) Hopper painting. More surreally, there is also a chorus (Tony L. Chin-Quee ’05, Alexandra S. Miller ’07, and Amy C. Stebbins ’07) that sings Lou Reed’s peppy “White Light” very nicely.

As to be expected, the directing is commendable. Though the onstage action at times neared chaos—while hustlers swagger down the sidewalk, a loud fight erupts in the café, and junkies shoot heroin in another corner of the stage—Zigler’s direction made clear when and where the audience should focus its primary attention. Indeed, those moments when action suddenly stopped to showcase characters’ monologues, some of which were directed to the audience as omniscient asides, or to frame absurdist humor (a song and dance number about hustling) were dramatically effective and seamlessly executed. Much of the credit for this is also due to very competent lighting, particularly notable given Gilead’s rearrangement of the mainstage space such that the permanent lighting booth did not command a view of the stage.

Though Gilead’s set itself (the work of Julian M. Rose ’06) is wonderful, and the character/audience interaction the intimacy of the seating provided is great, one couldn’t but get the sense that the cavernous expanse of the Loeb wasn’t being but to full use. The play itself occurs on what is normally the mainstage’s stage, and seating is situated alongside it. The whole affair, then, conjures the close-quarters feel of the Ex while providing twice the seating capacity and retaining the Loeb’s atrocious acoustics. This is a mixed bag, and though I heartily endorse avoiding the temptation the Loeb presents to produce mammoth, overly-ambitious and preposterous casts-of-scores student theater mega-disasters (think: Chess), there is perhaps some as-yet-undiscovered middle ground that the HRDC can reach. Regardless, Gilead is a professional, entertaining, and overall excellent production that is a credit to its staff, cast, and the potential of the mainstage.

A small gripe: it is necessary, for ethical reasons, to display the playwright’s name on the cover of a playbill. Though Lanford Wilson’s work is a little forgettable, this practice should be observed nonetheless, and Gilead’s staff should follow through on their evident commitment to professional production values and reprint their playbills accordingly.

—Reviewer Patrick Blanchfield can be reached at blanchf@fas.harvard.edu.