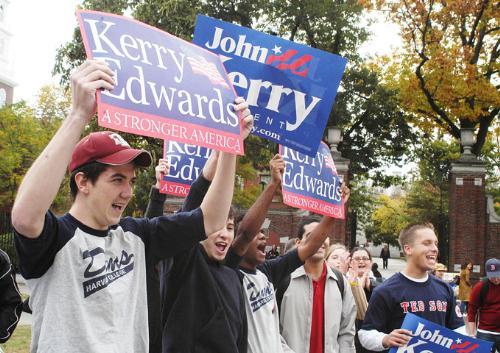 About 200 students gathered outside the Science Center yesterday to participate in a rally for John Kerry organized by the Harvard College Democrats. By Sarah M. J. welch
By Lulu Zhou, Contributing Writer

Students delivered passionate orations on foreign policy and domestic issues yesterday during the “Get Out the Vote for Kerry” rally organized by the Harvard College Democrats.

The College Dems also encouraged attendees to canvass for presidential candidate John F. Kerry in New Hampshire this weekend. By the end of the rally, which drew 200 people over the course of an hour, more than 100 people had signed up.

But while the Dems blasted Eminem’s new anti-Bush hit “Mosh” from speakers outside the Science Center, Republicans called the rally a waste of time.

“If this is what the Dems want to be spending their time on the week before the election, that’s fine with us,” Lauren K. Truesdell ‘06, secretary of the Harvard Republican Club (HRC), said after the event. “We like to see them wasting their resources.”

Truesdell said that rather than organizing a rally, HRC will direct all their efforts towards person-to-person campaigning, which is how she said the election will be won.

The College Dems hailed the rally as a success. Rally organizer Brooks E. Washington ’06, outreach director for the College Dems, said he was pleased by the diversity of student groups that participated.

“We decided it would be a College Dems-sponsored rally so that other groups can also showcase their issues,” Washington said, citing RAZA, a group for Mexican students that is generally nonpartisan, as an example.

“Groups like RAZA wouldn’t normally...participate if they had to say strictly which candidate they endorse,” he said.

In addition to a RAZA representative, College Dems’ members at large and representatives from the Harvard Social Forum, Environmental Action Committee and Students for Choice gave energetic speeches at the rally.

Michael A. Gould-Wartofsky ’07, a member of the Harvard Social Forum who is also a Crimson editor, rallied the audience with a chant of: “I say people you say power!”

Former RAZA president Priscilla J. Orta ’05 told the crowd her parents died because they could not afford adequate health care.

“[These are] the consequences of a government that doesn’t prioritize people, putting their own economic interests before [everything],” she said.

Pierangelo Giovanetti, a journalist visiting from Italy who attended the rally, said he would vote for Kerry if he were a citizen.

“Italy is hoping for a big change because Bush’s administrative policies made great mistakes in Europe and the Middle East,” he said.

Washington said the rally was “a celebration of the work that the Dems have done.”

“It solidified our base, energized people to get involved and electrified the campus,” he added.

And with 85 members at large this year, the College Dems are operating at record-high membership.

The rally also recruited volunteers to make calls to New Mexico last night and to travel to New Hampshire for Get Out the Vote Weekend.

“It’s really saying something about how passionate Dems are when they’re willing to campaign for free,” Washington said.

In contrast, Washington said the Bush campaign is paying volunteers to campaign.

“Our volunteers this weekend are actually losing money because they have to pay for food and housing when they stay over in New Hampshire,” said Andy J. Frank ’05.

Jessica C. Coggins ’08, another member at large, said she plans to campaign in New Hampshire for two days, including all of Election Day.

“I talked to my professors beforehand, and they’re all Democrats, so they understand,” she said.