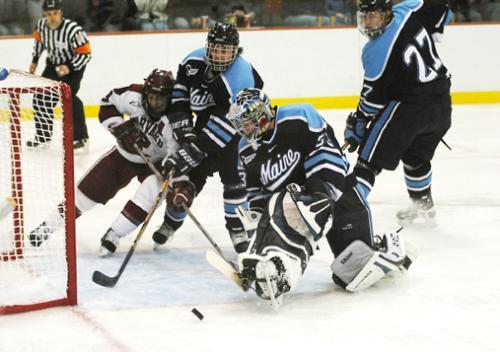 It’s been three years, three games against Maine and three painful losses for the Harvard men’s hockey team, and so there was certainly no lack of Crimson motivation in Saturday night’s latest episode of the Harvard-Black Bear drama.

“I think it was a very big win,” said Crimson coach Ted Donato ’91, a neophyte in the coaching ranks but well-aware of his squad’s recent history with Maine (10-7-2, 6-3-1 Hockey East) nonetheless.

And how could he not be? It was less than nine months ago, after all, that the Black Bears mounted a four-goal, third-period comeback to send the Crimson packing from the NCAA Tournament. Maine has been responsible for two of Harvard’s last three exits from The Dance.

“I’m not going to lie and say there was no extra motivation,” Donato said.

In fact, he asked, “Did the guys have a little more left in the tank because it was Maine in the third period? Probably. I would hope so. I think when you’re a competitor like our guys are, that’s part of the package.”

And it’s a complete package. The Crimson, winner in nine of 10 tries, improved its home record to 7-0-0 Saturday night with a gritty offense, a stalwart defense and a vintage performance in net by Dov Grumet-Morris.

The senior recorded 39 saves, failing only to stop a lone power-play tally with 68 seconds remaining in the game. And in his most important defensive stand of the night, Grumet-Morris stymied two successive breakaway attempts midway through the third period to preserve his team’s lead and momentum.

“It’s not something that’s that unusual,” he later said, “and [Black Bears goalie Jimmy] Howard made the same saves down at his end, too.”

Howard—widely recognized as one of the nation’s top goaltenders but whom Harvard smoked for four goals last spring—did turn in a fair showing, though his defense let him down on more than one occasion.

“I thought [Grumet-Morris] did great whenever he was tested,” said Maine coach Tim Whitehead, “but I thought they did an excellent job of giving him chances to succeed.”

On the other hand, Whitehead pointed to blueline failure when describing the first Crimson goal, a Jon Pelle score that found the back of the net after several stabbing rebounds.

“Jimmy made like three saves,” Whitehead said, “and nobody cleared the rebound. He’s not an octopus with eight legs, you know. He’s got two legs. We just have to protect our goalie better. I thought they did that, and we did not. It’s pretty simple.”

Despite Harvard’s obvious edge in clearing rebounds and protecting against screens, the home team was actually outshot 40 to 28. But the Crimson had gained the early momentum, outshooting the Black Bears 13 to 12 in the initial frame, and that would prove crucial.

“There were shifts that we outworked them, but I think for the most part, they outworked us,” Whitehead said. “Especially early, and that’s when most games are won.

“Sure we fought back at the end, but that doesn’t win you too many games,” he said. “Early, they set the tone.”

Harvard stormed Howard immediately, earning several quality scoring chances in the first minutes of play. Senior Brendan Bernakevitch mustered a shot that bounced between Maine’s netminder and the line, then sat precariously, a foot from the promised land, before Howard alertly swept it away with his stick.

And though the first period yielded only Pelle’s goal and four penalties, the Crimson hustle would pay off.

The Black Bears ended the night with 12 penalties for 32 minutes—including a 10-minute misconduct—and Harvard would strike three times on its power play. Kevin Du deflected a Tom Walsh slapshot at 5:56, and Andrew Lederman extended the Crimson lead to 3-0 with a screamer from the blueline that beat Howard glove-side through traffic at 16:02.

“Harvard outplayed us, outworked us,” Whitehead said. “That’s why they drew those penalties, because they were outworking us, and the bottom line was, they capitalized on their power plays and we didn’t. That was the difference in the game.”

The Crimson’s fourth and final goal also came with the man advantage, and though the squad’s first three goals were earned with hard-nosed, uncompromising play, this last strike was nothing short of graceful.

Forward Dan Murphy received a pinpoint pass and streaked down the ice, feeding the puck to sophomore Kevin Du on his left. Du fired it right back to Murphy, who took a quick shot. Reacting instantly, Howard made an impressive save, one Grumet-Morris deemed “the best save of the night.”

But forward Charlie Johnson was waiting for the rebound, and the center punched it in, completing a lightning-quick series of Harvard touches and earning his second point of the night.

“We’re always trying to get in front of the net,” Johnson explained. “Especially with Howard, we know he’s going to make the first save most of the time, so we were trying to get pucks to the net.”

The strategy was not lost on Whitehead, who later remarked that the Crimson “did a great job of wristing the puck through on the power play and either deflecting it in or getting to rebounds, and we did not.”

“Our defensemen battled as best they could to clear the net front,” Grumet-Morris said, “and when they couldn’t, they tried to get sticks and play as strongly around our net front as possible, and that does have a huge effect, both statistically and psychologically.”

Such a huge effect, in fact, that the Maine offense—which had notched 26 goals in its six-game unbeaten streak entering Saturday—never found any sort of flow.

“Our [six NHL-drafted defenseman] are big and strong, so we know they’re going to protect Dov,” Johnson said, “so Dov’s going to make the first save most of the time, and they’re doing a good job of blocking guys out and not letting them get to the second shot.”

And unlike last spring’s meeting—in which Harvard jumped out to a massive lead and then suffered a horrific, slow-motion, last-minute collapse—the Crimson kept applying pressure. The squad killed off all but the final of its 12 penalties, clearing the puck often and with ease and never really appearing in danger of repeating its agonizing history.

“The guys really stayed on top of it and were very aggressive and did a good job, I thought, for 60 minutes,” Donato said after his team knocked off its fourth top-15 opponent in as many weeks.

“They’ve been to the tournament three years in a row,” he said, “and this year looks, certainly to me, like the fourth year in a row. I’m just very impressed with their team.”