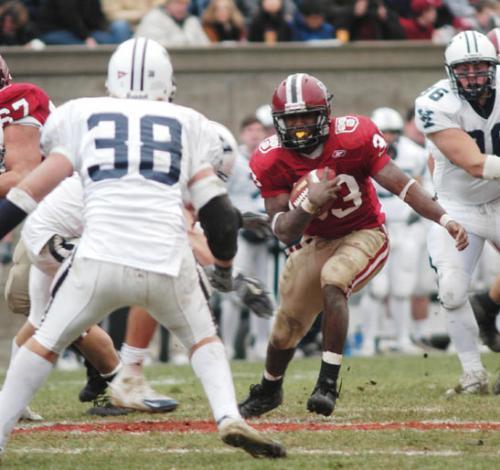 Clifton Dawson may not have gained a yard in over a month and a half, but his 2004 season still seems to get better with every passing week. The first team All-Ivy member and Payton Award finalist added another credential to his growing resume on Friday—first team All-American.

“It’s the greatest individual honor I’ve ever received,” said Dawson. “Every football player strives to make himself into the best football player that he can be, and although I definitely don’t think I’ve reached my full potential, it’s great to see my personal investments pay off with this national recognition.”

The sophomore back who transferred to Harvard after redshirting a year at Northwestern, helped lead the Crimson to a perfect 10-0 season and has already distinguished himself as the best back in Harvard history. Dawson’s 1,302 rushing yards and 17 touchdowns in 2004 both set single-season school records.

Despite an outstanding freshman year in 2003, Dawson came into the start of this campaign with plenty of questions surrounding him. With captain Ryan Fitzpatrick completely healthy, Dawson’s touches figured to go down in what was assumed to be a Fitzpatrick-centered offense.

But Dawson put any doubts about his ability to repeat his 2003 season to rest in this year’s opener against Holy Cross on Sept. 18. Playing in hurricane-like conditions on a field that was complete mud after the first two minutes, Dawson ran for 184 yards and three touchdowns in only three quarters of work.

After that performance, there was little uncertainty that the sophomore would be able to get his yards.

“I believe I’m playing with the most talented back in all of I-AA,” said Fitzpatrick following Harvard’s season ending 35-3 victory over Yale on Nov. 20.

The numbers would certainly back up that assertion. Dawson finished the season ranked in the top five in the country in both total rushing yards and touchdowns, despite playing in two to three fewer games than most of his competitors. He is also second in the nation in scoring, with an average of 10.8 points per game.

Dawson’s best game this season came against Princeton in which he rushed for 201 yards and three touchdowns in a 39-14 Harvard win on Oct. 14. Following that game, Princeton linebacker Zak Keasey said he refused to buy into the Dawson hype

“I don’t think he’s different from any other back we’ve faced this year,” he said.

But Dawson’s statistics paint a far different picture. His sheer consistency puts him a cut above any other back in the Ivy League. He ran for over 100 yards in seven of the Crimson’s ten contests and scored at least one touchdown in nine games. He was the most consistent scoring threat in the Ivies if not in all of Division I-AA.

Dawson was one of two Ivy players to be named as a first team All-American. The other was Columbia tight end Wade Fletcher.