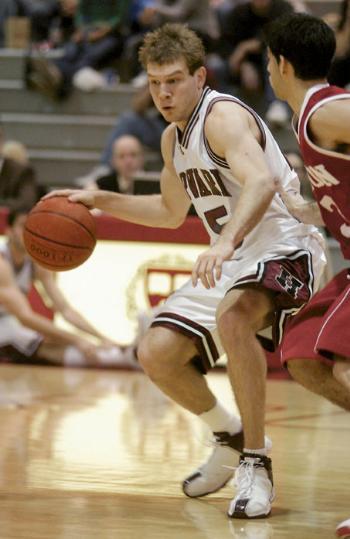 As the last seconds of regulation ticked off the clock on Friday night and the three-pointer from Colgate guard Jon Simon slid through the net, it seemed the Harvard men’s basketball team was stuck in an all-too-familiar nightmare. For the second time in four games, the Crimson defense had squandered a late lead on a desperation three-pointer to send the game into overtime.

But Harvard was able to shrug off the bad memory of its Dec. 1 OT loss to New Hampshire, as the Crimson (2-5) gutted out an 85-82 overtime win against Colgate (2-5) in Hamilton, N.Y., snapping a three-game losing streak and notching its first road victory of the year.

“It was identical to the New Hampshire game, same play,” senior guard Kevin Rogus said.  “But we learned from that mistake and were able to take that adversity and turn it around.”

“I think our team felt more confident in our ability to win this game,” senior point guard Dave Giovacchini added, “and we weren’t going to let what happened against New Hampshire happen in this game.”

Harvard appeared to have its second win of the season locked up late in the second half, as the Crimson led Colgate by six with 1:14 left in regulation.

But back-to-back three-pointers from Simon—the second coming with just seven seconds showing on the clock—sent the two teams to overtime tied at 67. The momentum squarely with Colgate, Harvard appeared to be poised to duplicate its previous loss in agonizing fashion.

“He ended up making two big shots, and you have to give the kid credit,” Giovacchini said. “We actually had a hand in his face on both of them, and he stepped up to send the game into overtime.”

The Crimson, however, refused to let the game slip away as it had earlier against New Hampshire, and was carried to victory by Giovacchini’s inspired performance. The point guard poured in 10 of the team’s 18 points in overtime, half of his career-high total of 20 points on the night.  Taking over in the extra session, Giovacchini continually slashed to the hoop and drew contact, converting two layups and hitting 6-of-8 free throw attempts after regulation.

“Everyone on the team knew it was only a matter of time before he had a game like that,” Rogus said. “He’s going to play like that for the rest of the year, there’s no doubt in my mind or anyone else’s.”

Despite that tremendous individual effort, Colgate hung around and had multiple chances to eclipse Harvard in the final minute of overtime.  Down by two with 28 seconds remaining, Colgate forward Andrew Zidar stole the ball from Rogus.

Zidar was then fouled, and made his first free throw before missing the second. After captain Jason Norman also hit one of two from the line, putting the Crimson back up by two with 14 seconds to play, Colgate again found itself with possession of the ball and a chance to tie or take the lead. This time, the Harvard defense held its ground, as junior Matt Stehle stole the ball from Colgate guard Kyle Roemer with five seconds left, sealing the hard-fought victory for the Crimson.

“Everyone realized that we had another five minutes to work hard and try to get the job done,” Giovacchini said.

Harvard led throughout much of the first half, and built a 22-12 lead with 9:53 left in the period. A flurry of shots from beyond the arc brought Colgate back, as the Raiders hit four treys to key a 19-7 run before intermission that gave them a 31-29 lead at halftime.

The second half was a back-and-forth affair, with three lead changes and three ties, the last resulting from Simon’s sharp-shooting heroics in the final seconds.  Harvard dominated the interior throughout the game, out-rebounding Colgate 40-27, while the Raiders stayed close by firing away from downtown.

Colgate was a remarkable 11-21 from long range, and was paced in that department by Roemer, who hit five of seven treys and totaled 19 points. Simon, who scored a game-high 21, guard Alvin Reed, who had 17, and forward Andrew Zidar, 15, each chipped in two three-pointers for the Raiders.

Harvard put forth perhaps its most balanced effort of the season, with all five starters scoring in double figures. Stehle led the Crimson in rebounds with 11 and notched his fourth double-double of the year by adding 15 points, while sophomore center Brian Cusworth had another solid performance, scoring 14 points and hauling in 10 boards.  Rogus added 15 points for the Crimson on 5-of-7 shooting.

The victory was a milestone for Coach Frank Sullivan, who recorded win number 143 in his career at Harvard, breaking the record for most victories by a Harvard men’s basketball coach held by Floyd Wilson.