Freshman-heavy cast manages to bring audience to roars of laughter 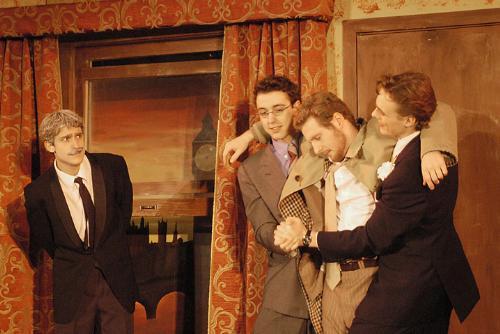 There wasn’t a dry eye Saturday night in the dimly lit Winthrop House JCR at the performance of Whose Wife is it Anyway?—the entire crowd was brought to tears from side-splitting laughter. The talented young actors who make up theattractive all-student cast were mostly freshman with as much aptitude for humor as any member of a professional comedy troupe. The director of the play, Andrew Arthur, the non-resident film and drama tutor at Winthrop House anddoting father figure to his cast members, agreed, saying, “Harvard actors are as good as you can find anywhere.”The play, which is advertised as a mixture of “Fawlty Towers and Sex In the City” among many other famous comedic successes, has been delighting sold outcrowds since it opened this past weekend. The all-student cast manage to capture with inimitable wit the work of Ray Cooney, often regarded as the “greatest living English farceur.” Set in the illustrious Westminster Hotel, the play tells the story of what happens when junior minister of the British Parliament Mr. Richard Willey (Hugh Malone ’08) decides to participate in an illicit affair with the secretary of a member of the opposition party, Mrs. Jane Worthington (Tracy A. Bjelland ’08). Oliver translates, “it’s like someone from the Bush cabinet hooking up with John Kerry’s secretary.” And so scandal ensues.

What proceeds during the night of an attempted tryst (instead of partaking in an important all-night Parliamentary debate in the House of Commons) is one of the most outrageously funny sequences of disasters that could possibly occur during one evening. After being the unfortunate guests in a room with a dead body, Mr. Willey and Mrs. Worthington manage to concoct a series of devilish plans to rid themselves of the interloper with the help of Mr. Willey’s best friend Mr. George Pidgen (Calum Docherty ’07).It becomes clear that they will have a hard time ridding themselves of the visitor as more and more people become involved as the night wears on, and thus Mr.Willy, Mrs. Worthington and Mr. Pidgen spend all night spinning a wildly elaborate and entirely humorous web of lies to keep the original secret from leaking.

It seems that with each minute, the characters’ circumstances grow subsequently worse, highlighted by the oft-repeated line, “I think our situation has deteriorated.” The only character who seems to be having one of the best nights of his life is Mr. Pidgen, the shy sidekick of the sly and overconfident Mr. Willey. Docherty slides into the role of Pidgen with ease and strength in his vivification of the old saying, “beware of the quiet ones.” In his first play at Harvard, Docherty manages to make believable the idea of a quiet young man propositioning his best friend’s wife and his mother’s nurse in order to save the friend’s reputation. The tall, thin young man’s red-faced proposals “to make mad passionate love” to two separate women within the course of 30 minutes were unforgettable as was his portrayal of a character hopelessly devoted to his dear friend Mr. Willy.

Another star on the rise was Malone. The able Malone delivers an energetic portrayal of the pompous young politician, Mr. Willy, despite hardly ever exiting the stage. The English born actor enters the stage with a gusto and zeal for theatrics, adding a needed edge to the appearance of a cast full of untrained passionate performers. The role that supporting characters like a nosy old waiter (Alex N. Chase-Levenson ’08), a provocatively funny nurse (Jamie Renee Smith ’08), and a suspicious hotel manager who possesses an ability to walk into a guest’s room at the worst moment possible (Brock W. Duke ’06) play in the performance is tremendous, and each player provides a certain charming element of their own hilarity, which puts that extra dash of spice into the play’s already piquant brew. Levenson’s talent is not to be overlooked though he is hunched over throughout the play and dons a gray wig as he wiggles about the stage. So convincing was Levenson in his portrayal of the meddlesome old snoop that at first I didn’t even realize that the character was played by a student. Any time Levenson took the stage he wowed the crowd with his powerfully conveyed comedic talent through the unassuming supporting character he played.

Duke was consistently able to be surprised on cue, which was most of what his character’s actions entailed, and his knack for contorting his face and appearing horrified was funny time and time again. As the snooty, overbearing hotel manager who must have thrown his guests out of the hotel more than fifteen times, Duke performed with a panache which made his characterization inevitably charming. Two valiant cast members were brave enough to bare more than the rest for their roles—freshman Peter T. McGuire ’08 and Smith each attacked their duties with confident professionalism. McGuire conveys the character of a moody, jealous spouse with vigor and a sense of authenticity, while Smith was audacious and collected in her portrayal of a rather frisky nurse.

The production of the Winthrop House Drama Society and producer Ted T. Ashley ’06 took place on a stage decorated as a suite in the Westminster hotel, with lush Victorian sofas, a rickety window that could almost be considered another member of the cast—it had the important role of closing on just about every member of the drama team on stage. The stage set-up was very professional-looking and all of the cast members were cool and confident on the stage.

Despite the fact that the play was completely delivered in dialogue and that no changes were made to the stage set up throughout the night, there wasn’t a lull in the crowd’s attention, and no one left the two hour production looking unenthused. Consistent laughter was the background music to this production, and many times, actors would have to hold off on delivering their lines until the crowd’s ebullience subsided. A lack of high-tech graphics, set changes, or any of the usual over the top features of modern entertainment were hardly missed. The show simply displayed a powerful script with the help of extraordinarily gifted young actors to deliver a marvelous show with a certain old-school finesse.

The set-up of the Winthrop JCR contributed to the old-fashioned theatre—it was transformed by long crimson and pink curtains, which created a special ambiance marked by elegance and comfort.