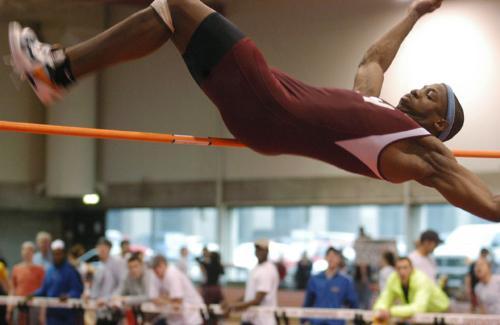 If meets with Ivy opponents next semester are the most important races for the Harvard track and field squads, Saturday’s Harvard Invitational was the warm-up and stretch.

An estimated 800 collegiate, professionally sponsored and unaffiliated runners from the length of the East Coast descended on the Gordon Track and Field in Allston for the sprawling meet, which outlined some of the Crimson’s strengths, gave a few rising stars a chance to shine, and filled the program’s coffers.

Only half the Harvard team ran, while the rest staffed the meet to raise money.

“You can’t look at it and try to make any predictions,” said women’s co-captain Laura Maludzinski. “It was basically just for fun.”

The meet kept score for individuals, but not for teams. Had there been a total team score, the Crimson would have benefited from strong showings in throwing, jumping and distance-running events.

“It’s hard to gauge how we were going to go, but I think we can look at the athletes who did well...and see that they’re still able to rise to the occasion,” senior Tekky Andrew-Jaja said.

Strength in throwing events anchored the men for the day. Senior Kristoffer Hinson won the shotput with a 15.2-meter hurl, and freshman Alex Obrecht finished fourth with a throw of 14.48 meters. Junior James Rhodes placed third in the weight throw with a 15.12-meter performance.

Harvard added fleetness of foot to strength of arms. The Crimson outlasted its competition in the 5,000-meter run, as sophomore Sean Barrett won the event in 14:53.06, 20 seconds ahead of Providence College’s Joe Dionne. Harvard freshman Ryan Hafer took third in 15:24.71.

The team’s other victory of the day came from Andrew-Jaja, who won the high jump by clearing 2.06 meters, tying his personal best on the first attempt.

“I was able to stay focused, to stay calm, and run my approach well. That’s what I’ll have to do with the Heptagonal Championships, Yale and Brown-Cornell,” Andrew-Jaja said.

The Crimson made an appearance near the top in the 60-meter hurdles, as well, as senior Travis Hughes finished 11th in the finals in 8.86 seconds.Senior Michael Schlund and freshman Eric Sax finished within four hundredths of a second of each other, taking 10th and 11th in the 200-meter dash. Sax tied for ninth in the long jump with a leap of 6.15 meters.

The Crimson men didn’t race the 800-meter, mile or 3000-meter runs, or the pole vault. Harvard did not qualify for the finals in the 60-meter dash.

Freshman cross-country standout Lindsey Scherf finished second in the 3,000-meter run, less than four seconds behind New Balance runner Roisin McGettigan. The time did not match the automatic qualifying time for the NCAA championships, but it likely qualified Scherf for the provisionals.“I was definitely happy with my race. It was the fastest time I’ve ever run,” Scherf said.

Fellow freshman Lauren Walker took fifth in 10:37.91, and Harvard did not enter any competitors in the 5,000-meter run.

The Crimson turned in some of its strongest performances off the track. Sophomore Sandra Stankovic won the high jump, clearing 1.65 meters, while freshman Jitka Vinduskova won the shotput with a 11.49-meter toss.

Sophomore Allyson Pritchett finished fourth in the long jump with a leap of 5.27 meters, and Vinduskova made 5.2 meters for seventh. The Crimson finished at the front of the pack in the 60-meter hurdles, as junior Mary Serdakowski and senior Eleanor Thompson finished second and fourth with respective times of 9.18 and 9.3 seconds.

Freshman Julia Rozier finished the 800-meter run in 2:18.76, five seconds off the lead. Senior Vicky Henderson finished seventh in the 400-meter dash finals in 1:00.02, and Freshman Rikka Strong took ninth in the mile in 5:32.23. Freshman Chidimma Kalu led the Crimson in the 60-meter dash, finishing third in the preliminaries in 7.86 seconds before picking up fourth in the finals in 7.83 seconds. Freshman Owanaemi Briggs, who finished 12th in the 60-meter dash preliminaries, picked up an eighth-place finish in the 200-meter dash with a time of 26.61 seconds.