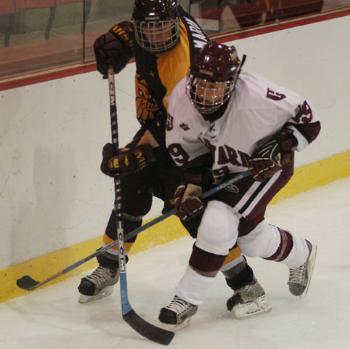 Tri-captain winger Nicole Corriero, shown in earlier action, contributed the No. 6 Crimson’s lone goal on Saturday, scoring in her 10th straight game and adding to her team-leading 22 tallies on the season. Harvard has nevertheless struggled recentl
By Gabriel M. Velez, Crimson Staff Writer

After beating UConn on Tuesday, the No. 6 Harvard women’s hockey team was hoping to enter its break with a little momentum. The Crimson will not play another game until January and did not want to go into the four-week layoff losing five of its last six.

Unfortunately for Harvard, after falling to No. 8 New Hampshire on Saturday by a score of 2-1 at the Whittemore Center in Durham, this year’s long Christmas break may be a bittersweet one.

“We wanted to go into the Christmas break with a solid win under our belts,” said tri-captain and winger Nicole Corriero. “We definitely wanted to end the year off on a positive note, especially after the last couple of weeks, but on the same token we now have the holiday to recharge.”

“We were really hoping to turn a corner after the Connecticut game and head in the right direction,” tri-captain Julie Chu said. “I still think that we are heading in the right direction. We’ve just hit a bump in road. It’s especially disappointing when you know you could have had the better of them.”

Harvard (7-6-1, 6-1 ECAC) knew that it would face a tough challenge in rival UNH (12-3-1). which had lost to No. 2 Dartmouth by a single tally last week. But that knowledge didn’t keep the Crimson from falling to the fourth consecutive ranked team that it has faced.

“UNH is a really good team so we obviously expected a great game,” Corriero said. “They have got a young team but a team that is certainly talented. They had a good record coming in, so by no means did we underestimate them.”

The game-winning tally came on the power play for the Wildcats. At 12:20 of the final frame, Jennifer Hitchcock pounced on a rebound following a slap shot by Jackie Wedster. Harvard junior goalie Ali Boe could not corral the first shot and allowed Hitchcock to pick it up and finish the scoring chance.

Harvard managed 31 shots on Melissa Bourdon, but could only put one past her.

Bourdon boasts a .940 save percentage as well as a 1.00 goals against average, but the Crimson’s inability to score with so many chances still irked the Harvard skaters.

“A lot of goalies end up coming up big against our team, I don’t know why,” Chu said. “I think we have outshot all teams the teams we have played, and it has just not gone our way.”

To Chu, it was not so much the goaltending of Bourdon that shut down Harvard’s offense but the Crimson that took itself out of the game.

“In the last few games we have started to become complacent,” Chu said. “We haven’t had a lot of edge and jump and we need to work on not playing only 20 minutes but all 60 minutes of a game. We had some great chances but we just don’t have that edge. You can call it luck or something extra.”

Corriero—the one mainstay in the Harvard offense—continued her onslaught of goals this season by scoring in her 10th straight game. She equalized the score at 1-1 at 13:23 of the second period for her team-leading 22nd goal of the season. Chu hit Corriero on a clear out pass and Corriero took the puck past the UNH defense and scored.

The Wildcats’ Stephanie Jones started the scoring when she beat Boe top shelf on the power play.

For the game, UNH was 2-for-5 on the power play, while the Crimson was 0-for-8—both stats a reflection of each team’s ability to move the puck around efficiently on the big ice at the Whittemore Center.

“They did a good job of moving the puck quickly and on to each others’ sticks,” Chu said. “They were good at taking advantage of our mistakes and they are good at taking it hard to the net.”

When UNH took it hard to the net on Saturday, it was able to find the rebounds and scored both its goals in this manner.

Harvard returns to the ice on Jan. 7 when it takes on Cornell in Ithaca.

—Staff writer Gabriel M. Velez can be reached at gmvelez@fas.harvard.edu.