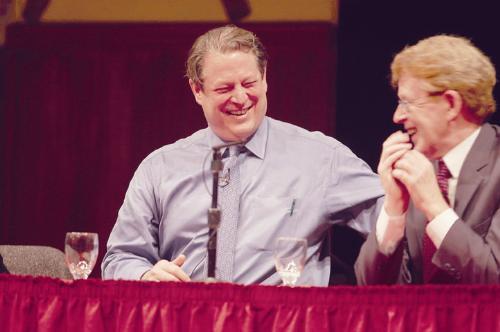 Former Vice President Al Gore ’69, left, speaks at at a panel on climate change yesterday afternoon in Sanders Theatre as Butler Professor of Environmental Studies Michael B. McElroy looks on.
By Reed B. Rayman, Contributing Writer

Former Vice President Al Gore ’69 called the threat of global warming an impending “crisis” and derided the Bush administration’s polices on climate change as part of a star-studded panel that packed 1,200 into Sanders Theatre last night.

During his time in Washington, Gore made a name for himself mastering the details of environmental issues and policies.

“Worldwide temperatures have been going up steadily, and sea levels have been rising as well,” Gore said at yesterday’s panel, backed by a PowerPoint presentation. “This is extremely serious.”

The former vice president zipped through a succession of slides reviewing the threat of climate change and outlined several possible solutions. In one nightmare scenario, sea level would rise more than 18 feet, submerging large swaths of Florida, New Orleans and Manhattan.

And when Gore showed pictures of the disappearing Larsen ice shelf in Antarctica, there were a few gasps and whistles from the audience.

“Are we serious about stopping this kind of thing or is it only the terrorists we’re worried about?” Gore said.

This panel on the environment was something of a homecoming for Gore, who first became interested in environmental issues as an undergraduate at Harvard, while studying with professor Roger Revelle.

He criticized the Bush administration’s inaction in the face of global warming, and even dipped into his bag of jokes to taunt the man who beat him out for the presidency in 2000.

He recalled a time in the sixth grade when a classmate pointed to the east coast of South America and the west coast of Africa and asked if they had ever fit together. The teacher said that was not the case.

The panel discussion, titled “Climate Change: The Way Forward” and moderated by Daniel P. Schrag, director of the Harvard University Center for the Environment, comes only weeks after Russia ratified the Kyoto Protocol and a month after the release of a significant scientific report warning about the effects of global warming on the Arctic.

In his remarks on the subject, McElroy, a leading scientist in the study of climate change, said that the Kyoto Protocol was an ineffective solution to the threat of global warming. He said that even the countries who agreed to the treaty have not been able to meet the reduced levels of greenhouse emissions. “Despite the rhetoric, we’re not doing a very good job in Europe or in other countries to meet the challenge,” he said.

The third panelist was Summers, who as chief economist of the World Bank signed his name to an infamous memo encouraging developed countries to export polluting industries to the third world. But more than a decade later, the University president was steadfast in calling for a solution to the problem of greenhouse gas emissions.

He pointed out that the College had established the Harvard Green Fund, which lends money at zero interest to any school interested in improving its energy efficiency.

“As a consequence of the Green Fund, there have been some 20 or more projects that have come to fruition. We’ve seen an average rate of return of close to 40 percent—that’s even better than the endowment,” he said. “And today I am pleased to announce that we are doubling the size of that fund.”

But in a question and answer session, Summers was forced to defend his position as an economist, which some saw as favoring economic development at the cost of economic reform. “There’s a reason I wasn’t in a big hurry to be on this panel,” Summers joked.

“Harvard is committed to efficient and sustainable energy, and will invest in this on a substantial scale, but we don’t believe that it is appropriate to use an optional check-off fee as a mechanism for supporting those investments,” Summers said.

But while the panelists took the subject seriously, the talk had its light points.

During the question and answer session, Maya E. Frommer ’07 asked Summers if he thought it would be economically feasible to pass the restrictions on greenhouse emissions.

“Perhaps I should defer that question to someone who’s received over 60 million votes,” he joked, turning the question over to Gore, who himself couldn’t help but laugh.

And when a student asked Gore for a catchphrase to describe the people obstructing the work against global warming, Gore fired back: “Republicans.”

But Gore said that climate change must be taken seriously. “We have to take care of this, and we have to keep our eyes on the prize.”