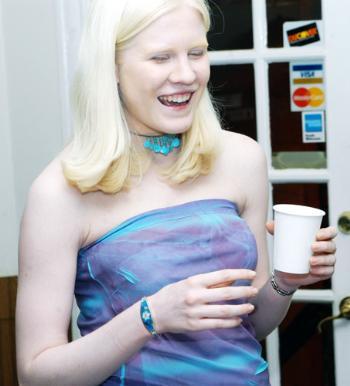 Out of the many Okies to tramp through Harvard’s halls, only one has ever come from Enid—Melissa L. Dell ’05.
By Steven A. Mcdonald

Out of the many Okies to tramp through Harvard’s halls, only one has ever come from Enid—Melissa L. Dell ’05. She remembers her hometown fondly as “the sort of place where getting on the Dean’s list in junior high is a big deal.”

As one might imagine, Enid, OK was even more shocked after news broke that Dell had won a Rhodes Scholarship. Although she feels honored, she recognizes that it tends to estrange her from others. “It’s sort of like getting into Harvard, except that the other people [the rejected] are classmates,” Dell says.

Dell did not become a Rhodes Scholar by chaining herself to her desk for four years, although she has always been academically intense. Lindsay E. Crouse ’06, a cross-country teammate and good friend, remembers a particularly telling moment. “We were just on a run during finals period during my freshman year,” she said. “I was complaining how I had two to go. She said, ‘I know. It’s really hard. I have four to go and I’ve already taken two.’”

And despite taking six classes some semesters and having a full workload, Dell manages to keep up the spirits of the women’s varsity cross-country team and give it her all. Teammate and close friend Erin K. Sprague ’05 says that Dell is “the one sending out the e-mails on the night before meets, getting everyone excited.”

Though the carrels of Widener and the trails by the Charles keep Dell busy, she hasn’t forgotten her roots. Dell recalls how other former Dean’s-listers didn’t realize that SAT IIs would be necessary for admission to many selective colleges. So, she established College Matters, an organization to help high school students learn exactly what they need to apply to college. Dell’s motive “goes back to [her] background from being from rural Oklahoma.”

Melissa Dell is the paradigm of the athlete-scholar, well-rounded and academically outstanding—basically, what all Harvard students strive to be. She’s even humble about it. In the end, Dell says, “it comes down to what you’re really passionate about and what you believe.” It’d be trite coming from anyone else, but Dell somehow makes it sincere.