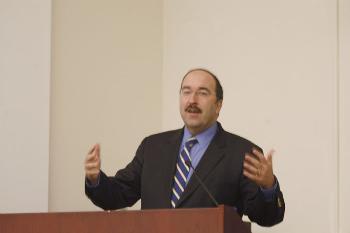 Israel’s former ambassador to the United Nations criticized the organization for failing to live up to its mission to protect human rights in a speech in Emerson Hall last night.

“We think of the United Nations as some type of moral beacon...but the moral compass of the UN is broken,” said Dore Gold, who represented Israel on the UN between 1997 and 1999.

In a speech based on his new book Tower of Babble: How the United Nations Has Fueled Global Chaos, Gold said that although its original purpose was to “nick aggression in the butt,” the U.N. fails to distinguish between aggressor and victim in international conflicts.

Gold cited the example of the U.N.’s initial failure to enter Rwanda despite warnings of imminent genocide.

“The chief of staff urged the U.N. not to go after weapons stock in the capital because the United Nations should remain impartial. As a result, 800,000 Rwandans were murdered,” Gold said.

He criticized the U.N.’s willingness to give Security Council spots to nations such as Syria, which is on the United States’ list of sponsors of terrorism.

“Originally, [a nation] had to be an ally of the United States, be against Nazi Germany, but now other countries don’t have to meet these standards,” Gold said.

Gold said that the U.N. should not be disbanded, but he urged nations to form alliances and take action without waiting for the Security Council’s approval. He cited President Bush’s invasion of Iraq and former president Bill Clinton’s involvement in Kosovo as examples.

“It’s dangerous to always respond to conflicts with the authorization of the U.N. Security Council,” he said. “Sometimes the U.N. doesn’t approve what needs to be done.”

Gold, who also served as an advisor to Israeli Prime Minister Ariel Sharon, said last night he believes the U.N. is too quick to criticize Israel’s actions.

“The U.N. condemns Israel for jay-walking, but doesn’t condemn other countries for murder,” he said.

Gold, who is currently president of the Jerusalem Center for Public Affairs, said U.N. involvement in the Israeli-Palestinian conflict could lead to “totally disastrous results.”

During the question and answer portion of the discussion, Gold cautioned against associating the Palestinian conflict with fundamentalist Islamic terrorism. “To connect rage of Palestine to Bin Laden is intellectually baseless,” he said.

Rami R. Sarafa ’07, an officer of the Society of Arab Students, challenged Gold’s support of Israeli government policy during the question and answer session, asking why Israel had built a fence that sliced through the West Bank, rather than putting it in a location designated by the U.N.

Gold responded that the fence was built in a place that would offer “maximum security” for Israel.

Sunny M. Yudkoff ’06, president of Harvard Students for Israel, which sponsored the event, said after the speech that the group welcomed the chance to hear Gold speak from his personal expertise.

“Very few people have the kind of first-hand experience with the UN—its successes and failures—as Ambassador Gold does,” she said.