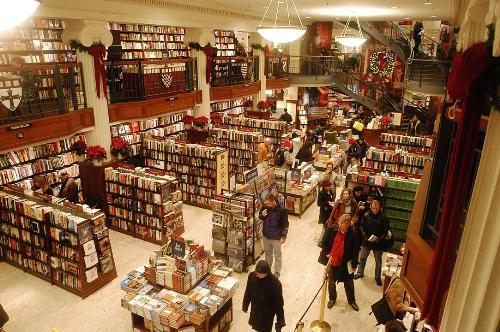 As Christmas draws near, Square businesses are attracting holiday shoppers in numbers roughly comparable to last year, although inclement weather and a rise in online shopping have some noticing decreased foot traffic in the Square.

Antony Chow ’06, assistant manager of The Harvard Shop, a Harvard paraphernalia store run by Harvard Student Agencies, said that while in-store traffic has remained the same as previous years, there has been a recent spike in web orders. According to Chow, Harvard baseball caps with an “H” embroidered on the front have been one of the most popular holiday gifts.

Nationwide, shoppers are also turning to the internet to make their holiday purchases. According to the “Holiday eSpending Report” released yesterday by Goldman Sachs & Co., Harris Interactive and Nielsen//NetRatings, online purchases during the first six weeks of the holiday season have spiked 28 percent over previous years. While last year online shoppers spent $13 billion, this year they have dished out $16.7 billion during the same period, with much of the growth driven by music, video, DVD and jewelry sales.

According to Francis Cardullo, an assistant manager at Cardullo’s and the owner’s son, the store operates an online website that offers gift baskets and a limited selection from their inventory. He also said the store has plans to take advantage of potential online sales by revamping its online store and expanding its online selection.

In addition to shopping online, customers are also leaning towards buying gift certificates as opposed to products, according to Jay Follayttar, a manager at City Sports on Brattle Street. Follayttar said that, while products from thermal clothing line Under Armour and the Red Sox DVD “Faith Rewarded” were the two most popular holiday gifts this season, he has noticed a distinct rise in the number of gift certificates sold.

“Gift certificates are becoming larger in terms of gifts because there is a bit less thought involved,” Follayttar speculated.

Most retailers agreed that the week before Christmas is the busiest week of the year, despite the inconvenience of yesterday’s snow.

“This is always the busiest week of the year for us—always,” said Cardullo.

Follayttar pointed out that unlike CambridgeSide Galleria, which provides indoor parking, Harvard Square stores are dependent on decent weather to draw in shoppers.

“A lot of people aren’t going to trudge through the snow, especially when there