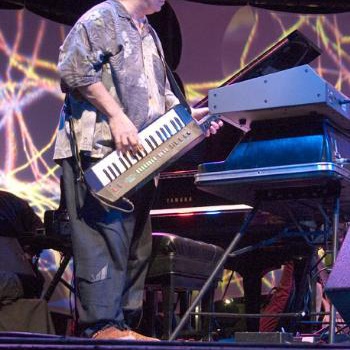 An eerie sound permeated the Berklee Performance Center last Sunday night as the Chick Corea Elektric Band took the stage. Lilting and ethereal, this complex of waves bounced against the walls and curiously wound its way to the ears of an entranced audience. There was a sense of foreboding and anticipation as the mysterious “space tones” of Chick Corea’s synthesizer began to build.

Suddenly Dave Weckl crashed down into his array of cymbals and the band was alive. The wild and crazy “Checkblast” assaulted the room with a barrage of solos and unison melodies that set eyes and mouths wide open with awe. Chick Corea, Ric Fierabracci, Dave Weckl, Eric Marienthal and Frank Gambale, a veritable dream team of jazz, were in full blast as the show took off and To the Stars, the ensemble’s new album, marvelously unfolded before the eager crowd.

The band was incredibly smooth on stage. The intricate melodies, stunning solos and extremely complex rhythms that make up To The Stars seemed to be a breeze for these seasoned and exceptionally talented musicians. After “Checkblast” and “Port View 2,” they cooled down playing the relaxing “Mistress Luck—A Portrait.” With its laid-back Latin feel and colorful melodies, the band easily settled in with the audience while effortlessly building up to the exciting “Johnny’s Landing.” At the outset of this number, Corea percussively tapped metallic synth sounds in offbeat rhythms to Weckl’s elaborate drum beat. The tune developed gracefully with a catchy bass line and calypso guitar accents. Gambale, Marienthal and Weckl played solos showing exquisite touch and truly unfathomable technical prowess.

Bassist Ric Fierabracci, who fills in for John Patitucci on the American tour, was no disappointment. His virtuosic playing and highly original solos were a pleasure throughout. From “Johnny’s Landing” the band went to “Alan Corday,” considered by many as the album’s signature track. With Corea and Frank playing acoustic instruments, “Corday” was a nice change of pace. Following was the finale, “Long Passage.” With perfectly synced melodies, intricate rhythms, showy solos and transcendent shifts in feel, the song was a real crowd pleaser. The house roared and to overwhelming approval the band went into its encore, the classic Jimmy Health tune “CTA,” which the band covers on their Paint the World album. Starting with a massive drum solo, the tune developed into a superb rendition with stand-out solos all around. Corea, donning his signature KX5 synth (a mini-keyboard worn like a guitar) stood center stage with the band and played away with a smiling youthful glow.

To The Stars is the first Elektric Band album in over a decade. Assembled in 1985, the progressive fusion band put out six ground-breaking albums, including the critically acclaimed Inside Out, before its members moved on to other projects in 1993. Though its synthesizers and often affected electronic sounds might seem out of phase with modern trends in instrumentation, the new album features an ideal balance of acoustic refinement and spacey experimentation. The “Elektric” in Elektric Band easily supplies the many futuristic sounds cleverly interspersed among Latin grooves, jazzy solos and the classic fusion sound. Clearly excited to be working with the band again, Corea had nothing but praise for his friends: “This is a great ensemble. These guys are just…beyond! They’re all very competent and professional as musicians and each one [is] an artist in his own right. They understand the songs and they understand the thought in the music and they deliver it back really in the way that they feel it and they see it. It makes the music rise up. The band was incredibly important in making this music come to life. They’re a great bunch. We’re real good friends.”

And perhaps their friendship couldn’t be more obvious than when they are playing together. The precision and coordination with which they play evinces a sort of telepathic communication between them. Questioned about this, Corea talked about the ethereal sensation of the group becoming a truly unified entity in performance. He said, “You can play the band from your own view point, like I’m the piano player say. But, I enjoy playing the band as the band. I ‘be’ the whole band and I’m playing the drums, I’m playing the guitar, I’m playing the saxophone. To me, the most wonderful thing about playing music is that.”

Corea has a very fresh outlook on music and the nature of aesthetics. He envisions melodies in many aspects of life and is often inspired by the wealth of beauty he finds in the world around him. He said: “The actual act of composing music is similar to the act of painting or writing a poem [in that] you summarize life […] You see a nice sunset; you’re the one whose mocking it up because you notice that it’s beautiful. It’s you that’s imbuing it with beauty. And your next step would be a poem or a dance step or a melody.”

Talking a bit about his youth in Chelsea, Mass. (and still pronouncing his “a’s” as “ah’s”) he mentioned that he used to be part of Boston’s once vibrant jazz scene and even wrote a song about the Mystic River. It was from these beginnings that he started to play with the likes of Mongo Santamaria, Stan Getz and Miles Davis. Moving on to assemble many famed groups (including Circle, Return to Forever, the Elektric Band, the Akoustic Band and Origin) and having played with nearly every jazz great of the modern era (from Herbie Hancock to Gary Burton), Corea’s career reads like a jazz history book. Constantly stretching the limits of his art (and winning 12 Grammys in the process) Corea is undoubtedly one of jazz’s most influential keyboardists and composers.

To The Stars is a testament to his unflagging creativity and is a proud addition to his already expansive discography. Based on the classic L. Ron Hubbard science-fiction novel of the same title, the album portrays various characters and places in the book, representing its often surprising plot developments in a new aesthetic dimension. To the Stars (the book) takes place on an interplanetary spaceship, the Hound of Heaven, and centers around the tragic lives of a crew subject to Einstein’s “time dilation theory” (as mass approaches infinity, time approaches zero). Traveling at near light speed across the galaxy, the Earth ages hundreds of years while they see merely a few “ship” days. Having no family or friends on Earth, the crew is its own unit bound to the inescapable laws of physics and the loneliness of the “long passage” (their distant voyage).

Featuring many exciting twists and a wildly surprising ending, To The Stars is considered one of the great classics of science fiction’s “Golden Age.” A long-time devotee of Hubbard’s work, Chick was particularly intrigued by To The Stars. After reading it numerous times and finding inspiration in a scene in which the ship’s captain plays “strange and haunting“ notes from an antique piano, he began to write down his musical musing and soon the new album (described as a tone poem) was created.

Though Chick has been acquainted with the work of L. Ron Hubbard for over forty years, To The Stars represents his first attempt at a musical interpretation. He said in interview, “Being involved with [To The Stars] and starting to portray [its] characters and places was a synergy I’ve never experienced before.” He also mentioned that he enjoys much of Hubbard’s other fiction, including Mission Earth (Hubbard’s ten volume magnum opus), Battleship Earth and many of his adventure, mystery and western works.

But, Chick’s true passion lies in Hubbard’s non-fiction work: the field of Scientology. Described by practitioners as the world’s fastest growing religious movement, Scientology is an applied philosophy which provides practical methods of self improvement and sponsors many social programs, including the Volunteer Ministers Program (a major force in Sept. 11 firefighter relief) and Narconon (a highly successful drug rehabilitation program). On Scientology Corea said, “It’s affected everything that I do […] [It’s] really helped me learn about myself; [it’s] helped me grow as a spiritual being, as a human being and as an artist.”

Smiling proudly in his humble manner at the conclusion of Sunday’s show, Corea seemed elated by the highly receptive audience. But perhaps this satisfaction was due to more than just a successful performance. Perhaps the distinction between To the Stars and Corea’s previous work is its motivation. Corea says that To The Stars represents the marriage of three of his greatest passions: “My passion as a composer/performer, my passion for the Elektric Band as a perfect orchestra, and my passion for L. Ron Hubbard as the ideal artist.” He says (out of his nearly one hundred album discography), “This project is my favorite recording.”