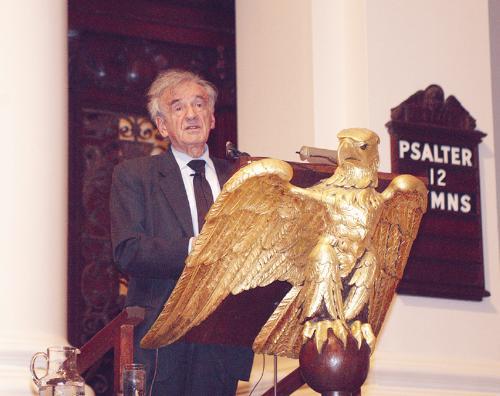 Elie Wiesel, who won the 1986 Nobel Peace Prize for his writings on the Holocaust, spoke last night about the need to combat religious fanaticism through education to a packed crowd in Memorial Church.

“The threat to the future of the world has a name and it’s fanaticism,” said Wiesel, who is the Mellon Professor in the Humanities at Boston University.

In his introductory remarks, University President Lawrence H. Summers said that it was “high time” that Wiesel spoke to the entire Harvard community and praised the author’s writings, which Summers said help individuals “find the courage to stand up for what is right everywhere.”

Wiesel is the author of almost three dozen books. His first, Night, was published in English in 1960 and is a fictional story of a young boy suffering in a concentration camp. He has also written two memoirs, All Rivers Run to the Sea and And the Sea is Never Full.

Wiesel condemned the rise of religious fanaticism, and said he was an advcate of non-violence. The education of potential radicals, he said, is the best way to fight this threat.

But in his opening remarks, Wiesel also questioned the degree to which education alone could fight indifference.

He noted that some of his darkest days following World War Two, when he was imprisoned in Buchenwald and Auschwitz, had come when he learned that the majority of killers possessed college degrees.

Opting for a conversational instead of a lecture format, Wiesel only spoke for about 10 minutes before fielding a range of questions from the audience.

Many of the questions asked concerned current events, like the crises in Darfur and Chechnya.

“I believe in words and not to use them just like that,” he said. “If it’s genocide the whole world has to intervene.”

Indeed, while responding to questions about genocides in Sudan, Armenia and Chechnya, Wiesel shied away from the term, preferring to call it “mass murder.”

The question and answer session was cut short due to time constraints, but no one raised questions about either the Israel-Palestine conflict or the American occupation of Iraq.

Wiesel was questioned, however, about his ability to maintain his faith.

“God and I have our problems,” he siad. “In Night I said some harsh things, but I never divorced God. I was ready to be an orphan...but not a divorce.”

Wiesel also said that he tried to include at least one element of hope in all his writings.

When asked how the lessons of the Holocaust would be maintained in the face of time, Wiesel said that he believed his role was “to be a witness, not a judge, and he who listens to a witness becomes a witness.”

After the almost 90-minute talk, Bernard Steinberg, the executive director of Harvard Hillel, which sponsored the event, called Weisel “one of the great moral voices of his generation.”

“He is...a man profoundly grounded in the Jewish tradition who is interested in the well-being of the world as a whole,” he said.

President of Hillel Anna M. Solomon-Schwartz ’06 said she had been inspired by the author’s remarks.

“I think his message of passion and political action is the most important lesson we can learn from him,” she said.