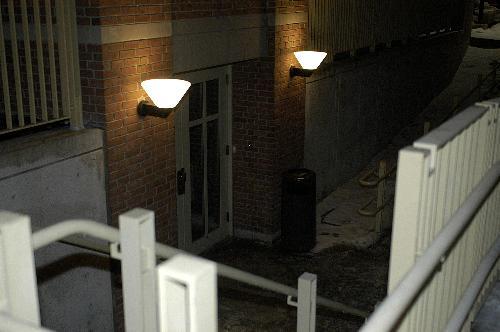 Shelter From the Storm

You could walk by University Lutheran Homeless Shelter without ever noticing it, unless you stopped to wonder who was taking
By Irin Carmon

You could walk by University Lutheran Homeless Shelter without ever noticing it, unless you stopped to wonder who was taking a smoke break outside the church basement near midnight. From November to April, the country’s only student-run homeless shelter welcomes guests in from the cold to occupy a limited number of beds. I’m joining the overnight volunteers, who arrive at 11 p.m. and take turns sleeping ’til it’s time to make breakfast.

Amisial sticks his head outside and calls in the last of the smokers. Back in the kitchen, he grins and puts on his bright yellow coat.

Seated in front of the endless drone of the television—right now, treating us to a very grainy version of The Drew Carey Show—one guest’s chin sinks to his chest in slumber. The volunteers and guests who haven’t gone to bed yet sit in clusters and talk in hushed tones.

A guest named Darren pores over some printouts, preparing for his first day of work as a long-distance plan telemarketer in Waltham tomorrow. “I’m sitting here cramming,” he says. “I want this spiel to be as genuine and human-sounding as possible.”

Darren, who wears a crystal pendant over a black tank top that shows off muscular arms, says he’s prepared for rudeness and hang-ups. All calls must end with “On behalf of SBC, I thank you for your time,” even if the potential customer has already hung up. Says Darren, “I believe my share of nastiness won’t be too bad because I didn’t put that out when I was growing up. I honestly believe that things will balance themselves out. If not, we wouldn’t be spinning on this axis now.”

I eavesdrop on a spirited debate on interfaith marriage. “I married out of my faith, and I had to go to confession just because I had fallen in love with an Orthodox Jew,” says 47-year-old guest Michael Moreau. He wears red plaid and speaks earnestly with his hands. “I told my parents, I love Jews. Jesus was a Jew. My father told me I would be excommunicated.”

Adrian M. Tam ’06 is indignant. “What does it mean to be excommunicated from the Church? Are you denied salvation? That’s bullshit!”

Giulio J. Pertile ’07 is hunched over the notes for his Physics 15a final. He says he blames himself for not having “gained that much” from his semester at the shelter. “I’ve not initiated a lot of conversation with guests. I mostly come here, do my homework and talk to other volunteers.” He takes off his glasses and squints. He says he may or may not come back next semester. “I need to give myself the opportunity to try other things.”

Ray Muldoon is from East Boston, and he’ll be 24 in three days. He says he left Boston with eight dollars and a bag of weed, and became a stripper in Ohio en route to California. “You know what I did today?” he says. “I sat outside The Garage and watched people fall on the ice.” He’s restless, fingering the tattoos of Japanese characters and a cross he has on either side of his neck. “Physically, my body is telling me to go to sleep, but my mind is telling me to stay awake because I’d miss something. Except nothing ever happens.” How long has he been awake? “Days. Weeks. Years. It never ends.”

His fingers close in on the two completed puzzles on the table, breaking the pieces apart. “Why do people get so upset about things getting torn up? They’re going to be more upset about this puzzle than the war our president’s making.” Tired of the puzzle, he rests his head on the table, using his bent arm as a pillow.

The doorbell rings. No one else is allowed in, so the volunteers sit still.

Muldoon tells Xuan about his daytime occupation playing guitar at the Downtown Crossing T stop. “The other day a girl showed me her boobs. It just happens.”

“It doesn’t happen to me,” teases Xuan.

“Well, I’m a good-looking guy,” says Muldoon. “Charming, funny. All that adds up to a lot of boobies.”

Pete, a guest with flowing white hair walking by, glances over at us. With dignity he says, “It’s reciprocal.”

Walking down the darkened halls means an orchestra of snores coming from the bunks on the other side of the lockers.

Pete asks me if I’m really in love with him. I say, “I didn’t even know your name was Pete.”

Nearly everyone is asleep, and TV programming has mostly given way to phone sex commercials. We stay awake on microwaved pastries that have been donated by places like Hi-Rise Bakery and Peet’s Coffeeshop.

The volunteers that have been sleeping for the last four hours are woken up so the next shift can sleep before breakfast preparation. Guests must leave the shelter immediately after breakfast at eight a.m.

Bleary-eyed after being awoken, Tam tells me about how he went on a religious fast with his Christian group. “It happened to be the day in my Chinese class where they talked about food preparation,” he recalls. “I thought, wow, I never want anyone else to have this feeling. So I signed up to come here.”

Coherent sentences become a challenge for all of us.

A guest wakes up and groggily asks for a raisin scone. We go into the kitchen to find Mary Ellen Player ’04 asleep facedown on this month’s InStyle magazine. She wakes up. “My mom’s still skeptical about the overnight shift,” she says. “She keeps going, ‘are you safe?’ And I’m like, Yes, mom. This has been all about learning that people who don’t have homes aren’t necessarily dangerous. Homelessness is not a disease. It’s not contagious.” She recalls having to walk by guests on the street with whom she’d conversed in the shelter, ignoring them in accordance with shelter rules.

Player says, “People don’t understand about mental illness. They think the homeless have a degenerative Protestant work ethic.” Quite a mouthful for 4 a.m., I say. “Whatever,” she says. “I’m a Social Studies concentrator.”

Player drags the stainless steel coffee machine into the kitchen. Some people will wake up soon for work, so coffee-making starts now.

We watch Fantasia with a guest named John Poor, 58 years old and strikingly New England. He says he supports Bush. Does he ever bring this up in the shelter? “Are you kidding? Do you know how long I’d last here? Anyway, most of the people here are more worried about their next cigarette than what’s happening in North Korea. I mostly mind my own business.”