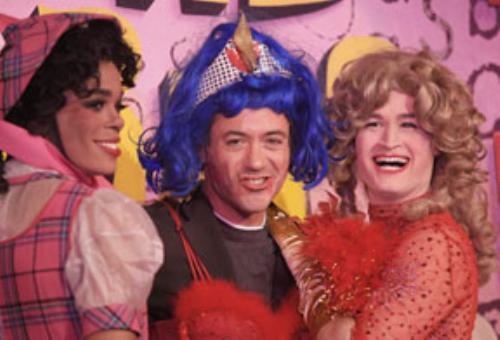 Robert Downey Jr. may have several drug counts and a Golden Globe to his name, but he’s never had a pot just for pudding.

The Hasty Pudding Theatricals honored Downey last night with a brass pudding pot yesterday in the annual ceremony at their theater. Co-producers Nicholas H. Ma ’05 and Christine M. Otal ’05 were on board to “roast” Downey, subjecting the actor to a series of publicly humiliating tasks before he formally received the pot.

Entering the theater to hearty applause, Downey jokingly took a seat among the audience members, coming onstage at Ma and Otal’s introduction.

Reprising his role as a psychiatrist in Gothika, Downey acted as a therapist to a neutered bulldog who sported a bandage in his genital area.

“How are you feeling today, you nutless wonder?” he quipped.

Downey, clad in a gray blazer and slacks, was then asked to show off his singing skills, a reference to his role in the 2003 movie The Singing Detective.

“Oh where, oh where is my next big hit film?” he sang.

Ma, unconvinced that Downey had proven his mettle, insisted that the actor “walk without the talk.”

Alluding to his roles in Chaplin, Two Guys and a Girl and Wonderboys, the hosts had Downey reprise his role as Charlie Chaplin—one which earned him an Oscar nomination—and convinced two members dressed in drag that he was in love with them.

With cane in hand, hat on head, and mustache on face, he dipped and kissed cross-dressed cast member Ryan T. McKnight ’04—all in complete silence.

At the hosts’ request that Downey answer their questions while impersonating his talk show host role from Natural Born Killers, the actor continued to act in silence.

In a final test, the co-producers had Downey once again play detective.

“To earn your pudding pot, you’re going to have to find it,” Ma said, as two cast members paraded out, each holding a brown box.

Downey pointed arbitrarily to one, only to discover that it contained a red bra trimmed with feathers.

At Ma’s suggestion, the actor donned the bra, and, after opening the second box, the blue Wonder Woman wig it contained.

His face smeared with the lipstick of cross-dressed cast members, Downey finally received his prize.

“This is like being on the Van Halen tour,” he said. “I haven’t been this excited since I played pocket pool and watched Animal Planet this morning.”

While Ma and Otal poked fun at Downey’s past roles, ranging from his first movie role in Pound to his work in the little-seen film Rented Lips, the Pudding members avoided mentioning his past drug convictions, a subject which has been much lampooned on late-night TV.

Downey himself referenced his arrests.

“This is the first time a convicted felon has received this award,” he said. “If there’s anything I could teach, I could easily fashion a shiv out of a can of tuna fish.”

In a press conference after the ceremony, Downey fielded questions regarding his brief stay at Harvard.

“There’s something sinister and twisted about the student body here that I appreciate,” he said.

Questioned as to why he was selected as this year’s Man of the Year, Downey shrugged.

“I guess it was because I was available because the first two people they went to turned it down,” the actor deadpanned.

Downey also walked away with a gift basket (estimated value: $5,000) that included goodies such as an Alpha Omega watch.