Eyedea Rebuilds Underground Hip-hop from the Beat Up 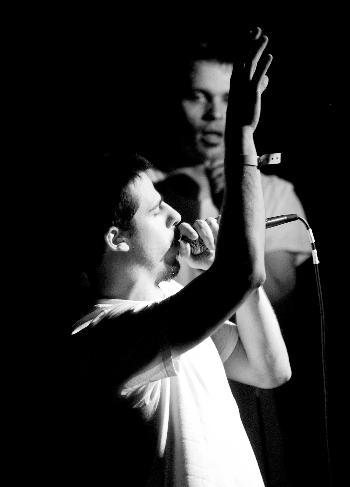 The cutting-edge Eyedea sets a new standard for hip-hop as he plunges the sonic depths with fellow MC Slug onstage at the Roxy.
By Alex L. Pasternack, Crimson Staff Writer

When Mike Larsen was five years old, cars or buildings weren’t just the playthings of his imagination—he wanted to know how to construct them and would often make modest attempts in his backyard. Later, while mining his mother’s record collection—a mix of Sly, Metallica and Sugar Hill Gang—he grew curious about how to build these too.

“Call it a disease, a curse. It’s a neurosis. It’s actually a problem,” he says of his insatiable ambition a few days after his Feb. 10 concert at the Roxy in Boston. At 22 years old, he’s still diseased. With three LPs and dozens of awards to his name (or rather to his apt stage alias, Eyedea) the Minnesotan lyricist has become a symbol for a burgeoning underground hip hop movement that places improvisation over production and references old school rap with a lively philosophical twist. The future, according to these hip hoppers, replaces gun waving and gold-encrusted excess with surrealist word games and existentialist crises.

Like other white-skinned, sharp-tongued rappers to achieve recent success (Slug of Atmosphere, El-P, Sage Francis), Eyedea is used to hearing the inevitable (but unwarranted) comparisons with Eminem, he of the multi-platinum vitriolic psycho babble. But categories are exactly what Eyedea wants to destroy, a goal that he continues to pursue on the just released E and A—a carnivalesque party record that playfully combines the dazzling record scratching (of his DJ, Abilities) with his own lyrical acrobatics. The sharp meditations, smooth sampling and trippy beats are signs of a polished emergent star aiming for mainstream visibility. But his allegiances to an avant-garde vision are also clear: “I don’t care if you just broke up with your boyfriend/ I ain’t trying to go where every other rapper’s been,” he raps, typically self-conscious and indifferent.

Still, on tour now with Slug—his better-known label mate and friend—Eyedea’s iconoclastic style may be his ticket to success, about which he is anything but indifferent. “I want everybody’s fans,” he admits. “I want every single person who listens to music to like me. I can’t do anything beyond making my record and playing as many shows as possible.”

At first glance, Eyedea looks like the nice guy he really is. His limber 5’10” frame bounces across the stage easily or hides under a hood behind a soft cloud of spit and a microphone that he handles more like an heirloom than a weapon. When he strides up to offer stickers to those standing next to the bar after his set, sans microphone and hoodie, his disarming smile and slight stature make it easy to mistake him for an eager groupie.

But on the underground rap circuit Eyedea is no pushover. The confidence he brings to talking up strangers at the bar is matched onstage by a gusto for witty improvisation that has flattened MCs on both coasts. Before he’d even graduated from high school, first-place trophies from countless freestyle tournaments were taking up bookshelf space next to James Joyce and A Brief History of Time. After winning the famous World Blaze Battle in 2000, broadcast on HBO and judged by rap extraordinaire KRS-One, Eyedea hung up his gloves because there wasn’t anyone left to fight. (Contrary to popular belief, he’s never battled Eminem, and would only do so “maybe if we’re both famous, for charity or something cool like that.”)

Besides, he moans, since leaving the fray, the art of freestyle dueling has gone downhill. On today’s rap battlefield—as seen on MTV and in the Eminem film 8 Mile—cruelty often trumps sheer ability. “Now, I feel like there’s no flow, there’s no rhythm there anymore,” he says. “Show me how to rap. Yeah, you can make fun of me, but what’s it really about?” While he subsequently gave up verbal fisticuffs in favor of the jovial, cerebral rhyming games he regularly performs on stage and in his home-town record store, freestyling remains Eyedea’s main love and what he calls “a cornerstone of hip hop.” “You don’t get the same ecstasy writing down something on a piece of paper as you do spitting something from your mouth. It’s like drawing a picture of a fight, or actually fighting.”

Yet it could be argued that Eyedea’s nascent popularity is due more to drawing than fighting. His slightly-nasal rhyming—highly textured and lyrical—often offers intricate portraits of a young brain at war with itself. While his collaboration with Abilities (Eyedea’s childhood friend and fellow “idealistic, arrogant bastard” Gregory Keltgen) on 2001’s First Born could have easily been a tiring exercise in introspection over break-beats, their ontological and musical exploration was a welcome q-tip in underground hip-hop’s ear. After two years of intermittent touring and solo projects—Abilities scratched on El-P’s futuristic Fantastic Damage while Eyedea recorded the beautiful, too verbose The Many Faces of Oliver Hart—they returned to the studio with a blank slate.

To make E and A, Eyedea and Abilities sought to break free of the hierarchical emcee-DJ paradigm by emphasizing teamwork inspired less by Timbaland and Missy than Miles and Coltrane. “We’ve definitely drawn an element of the whole free jazz kind of approach—improvisation, duets, back and forth soloing,” Eyedea says. He likes to refer to Abilities not merely as a turntablist but “lead guitar player.” On the new record, “there’s stuff that has never been done before between an emcee and DJ.”

Despite his persistent attention to disorder and chance—his stop at the Roxy last week featured more improv rhyming than album tracks—Eyedea has grown more concerned with controlling his chaos on record. In order to achieve the “epic” sound he and Abilities wanted on E and A (as opposed to the late-night pensiveness of past records), they emphasized crescendos and traded, so to speak, verbal length for sonic depth.

“We took the same approach to making every song as great as it can be,” he says. “There’s this trend of doing long records where half of it sucks, and we’re just not into that.” His new focus may appeal more to the wider audiences he wows while opening stages for Slug, whose own music has become more one dimensional and rock-oriented—and more popular. “The reality is [Slug’s] bringing in people who not only don’t know, but really don’t give a shit about rap. [They’ve] never seen a rap show and they’re like, ‘this shit is fucking awesome.’”

Ask Eyedea if his desire for mass appeal has effected his artistic ambitions, and his response is as complex, curious and conflicted as his best rhymes. “My main objective is being the best musician I possibly can,” he says. “[But] you can’t feel good about yourself if people don’t dig your music. Music is pointless if it’s in a cave, if there’s no emotional connection anymore.”

Indeed, while a concern over illusion and reality inside Plato’s cave permeates First Born, Eyedea’s assertive lyricism on E and A cares more about the music and the audience than epistemology. “This is a necessary change,” Eyedea raps at the start of his new head-spinning single “Now,” as if to preface the record that follows.

After tossing off some of his current rap favorites, Eyedea tellingly gives major props to a slew of reluctant mainstreamers, including Outkast (“the most important people in rap music”), Radiohead (“the best band still alive”) and the work of Beck and Sigur Ros. Like these artists, Eyedea wants to achieve success without personal compromise, a feat that may require not just building great songs but reconstructing the entire hip hop playing field.

“I hope that this record does really good,” he admits. “I want it to open people’s ears up and create a new standard for music—even if my shit’s the bottom of the barrel. I want my shit to be the bottom so that everything else can just get better.”

—Staff writer Alex L. Pasternack can be reached at apastern@fas.harvard.edu.