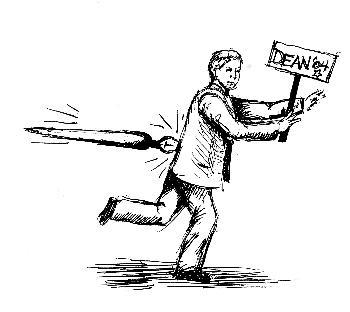 Members of the mainstream press covering former Vermont Gov. Howard B. Dean’s presidential run apparently didn’t sleep through their high school English classes, where they learned that compelling stories always follow arcs from beginning to climax to denouement. Being good pupils, they constructed a now-familiar narrative around the candidate, first building him into an outsider-turned-frontrunner and then relentlessly tearing him down. The storyline bore little relationship to the facts of the campaign, but after reporters and editors decided that the peak had been reached—roughly ten months before the general election, and before a single vote had been cast in a primary or caucus—they imposed on their audience a diet of character defamation coupled with early pronouncements of death, making Dean into an increasingly difficult choice for voters. More than any other candidate, Dean was made—and unmade—with the pages and cameras of major news outlets. The media did not play fair, and with Dean’s withdrawal last week they finally accomplished their goal.

The concocted narrative could be seen unfolding on the covers of publications like Time and Newsweek, each of which put Dean on the cover twice (by an odd “coincidence,” on the same week each time). In August, they hailed the coming of an antiwar underdog, and Newsweek set up the central conflict that would dominate mainstream campaign coverage until mid-February with their cover title: “Howard Dean: Destiny or Disaster?” In December, the author of that August story, Jonathan H. Alter ’79, who is also a Crimson editor, published a remarkably prescient column. Though Dean was on the upswing following an endorsement from Al Gore ’69, Alter said it was still too early to call him a “shoo-in,” positing two laws: the “Law of Premature Predictions” and the “Law of Media Oscillation.” Of the second, he wrote, “The process invites—no, demands—a series of sine curves to keep everyone interested…The media will half-consciously rearrange all the atoms of emphasis and particles of story choice to make it seem so.”

It should come as no surprise that Alter—a member of the profession that charges itself with implementing this “law of media oscillation”—proved entirely right. Just two issues later, on January 12, Newsweek’s cover showed a glaring Dean with a scare headline: “Doubts About Dean: Behind the Democrats’ Battle to Stop Him.” The story’s opening showed little promise to deliver much substance on that theme—but it revealed plenty about the media’s desire to bring down the outsider from Vermont who had dared breach the establishment’s walls. “The murmurs of doubt are faint, barely audible above the background hum of the Internet cosmos, but they are worth listening to,” the article began, proceeding to quote a few Dean-doubters posting comments of dubious newsworthiness on the former governor’s public, uncensored weblog. A month later, Sen. John F. Kerry, D-Mass., was fresh off the Iowa victory the media had handed him, and he appeared on Time’s cover with an uncharacteristically flattering photograph that could only be called “presidential.” Below it ran a caption that, at least on a grammatical level, asked a question: “What Kind of President Would John Kerry Be?”

They never liked Dean, it was clear. Time magazine selected Dean in its final issue of the year for a photoessay of the “People Who Mattered 2003”—at first seeming a positive choice, until one noticed that, alone among the dozen or so other entries, Dean’s photo was a blurry gray shot of his back talking to four or five equally blurry members of the press at a blurry location. All the other photos were well-lit images including their subject’s faces—not a bad objective for responsible photojournalism. Two weeks later—the same week as Newsweek’s “Doubts” story—Time ran a blotchy color-by-numbers-style illustration of Dean. Their analysis, as it turned out, was about as rigorous and useful as color by numbers; it was even accompanied by two photos, one glaring, one smiling, with the incisive captions, “Angry Prophet” and “Happy Warrior.” “It is more complicated at the top of the heap,” they insightfully noted of Dean, who they said was “being pummeled from every angle, and his every assertion…examined under a microscope.” But rather than showing how that process was working, their next sentence went ahead and pummeled Dean, repeating as fact a series of stale, illogical campaign-trail critiques.

The media handled those who questioned the balance of their coverage with a pat analysis: Dean brought it all on himself with a single character flaw, his “anger.” Never mind that they found exactly zero meaningful examples of Dean’s supposed short fuse—no instances of the doctor having blown up at family or employees in Vermont’s government. Still, the media’s team of pop psychologists had already certified him incurably “angry.” Their distorted case against Dean seemed closed when they seized upon his post-Iowa “scream,” playing it again and again (633 times on broadcast and cable media in a few days, according to the Associated Press, and relentlessly in Diane Sawyer’s half-hour ABC interview of Dean and his wife). But, it turned out, the so-called shout itself wasn’t actually the manic, out-of-the-blue cry of an angry madman—closer inspection revealed the clip to be the product of a bad, misleading recording from a unidirectional microphone. Moreover, it was obvious in context that Dean’s litany of states was by no standard angry and was hardly out of place in front of a crowd of exhausted, disappointed—but still enthusiastic—volunteers. A few days later, Sawyer quietly admitted that she had by then heard a second recording of the rally at which, she said, “the so-called scream couldn’t really be heard at all.” CBS, ABC, CNN and even Fox News all admitted to varying degrees that they’d overplayed the clip. But their sheepish statements of regret didn’t approach anywhere near 633 airings. And in the weeks that followed, it was that scream—at last, incontrovertible “evidence” of his “anger”—to which pundits pointed in describing his downfall.

Within weeks, reports of Dean’s demise were being greatly exaggerated, or at least greatly rushed. On Feb. 2, right after Iowa, Time wrote, “Howard Dean found himself clawing his way back from his near-death experience”—despite the fact that his brush with “death” had consisted of picking up a respectable number of delegates before the polls opened in 49 out of 50 states. Once set in motion, nothing could derail the media’s plotline, which left the doctor no room for resuscitation.

They stamped him “unelectable”—an essentially meaningless adjective in the earliest months of an election year, but a self-fulfilling prophecy when many people believe whatever their TV anchor tells them. In one glaring example of an obituary published before death, the CBS affiliate in Jacksonville, Fla. posted on its website a Knight-Ridder wire story announcing Dean’s Wisconsin loss, comparing his campaign to a “plummeting comet,” at 8:42 in the morning on Feb. 17, just hours after the Wisconsin polls had opened and long before even preliminary results were available. Knight-Ridder is widely regarded as a high-level, professional news organization—the kind where publishing news stories before they happen is generally frowned upon. But its editors evidently didn’t need any precincts to report results in order to know them. The Columbia Journalism Review has documented other glaring errors: on Feb. 17, The New York Times referred to Dean campaign chairman Steven Grossman as having joined Kerry’s campaign—before he had. Moreover, by any count Dean was—and even is today—ahead of Sen. John R. Edwards, D-N.C., in terms of number of convention delegates secured. Edwards, though, an anointed favorite of pundits, was never declared unelectable; by contrast, Dean, whose “loss after loss” generally consisted of respectable second- and third-place finishes where he picked up a healthy collection of delegates, was.

Numerous studies by non-partisan media research groups have demonstrated that Dean received a disproportionate share of negative campaign coverage. According to the Center for Media and Public Affairs, he received twice as much coverage as Kerry in 2003. Forty-nine percent of Dean’s mentions were deemed positive, compared to a whopping 78 percent for the other Dems combined. It became even worse on the day of Iowa: before the caucuses, the Center reports that 98 percent of the network evening news coverage of Kerry and Edwards was positive, compared to 58 for Dean. Even more remarkable than the numbers themselves is the rabid ferocity with which the media buried Dean. Sawyer even went after Dean’s wife, repeatedly saying that she could just “hear some people out there…saying” (her earpiece must contain a direct feed of the voice of Americans everywhere) that a career woman like Judith Steinberg Dean could not be first lady, and interrogating the couple on how a truly romantic husband could buy his wife rhododendrons for a birthday present. The Deans comported themselves with notable dignity under Sawyer’s vicious, distasteful interrogation. Her vitriol was hardly unique. Even The Weekly Standard’s William Kristol—not known for his liberalism, to say the least—said that “the media really turned on Dean.” Just last week, longtime political journalist William Greider wrote in The Nation that he had talked to a handful of top campaign reporters who were “chortl[ing] over their accomplishment” in toppling Dean.

Former New York Times reporter Jayson Blair’s fabricated coverage inspired widespread outcry from the public and major restructuring within many newspapers last year. Stephen Glass, whose fabulously creative—albeit false—inventions in The New Republic hardly changed the results of an election, created a frenzy within magazine journalism and had his story turned into a cautionary motion picture this year. Where is the rage at the media players who bypassed the democratic process to willfully eliminate a candidate and manipulate an election with coverage that was often misleading and sometimes downright inaccurate? Many of the nation’s top reporters, editors and publishers are doubtless proud of their remarkable demonstration of the uses and abuses of the fourth estate’s power, but they should be ashamed of themselves. The commercial media’s coverage of Dean was often no more than an irresponsible, unfair, unprofessional sham. Newspaper magnate William Randolph Hearst notoriously followed through on a promise to supply the Spanish-American War so his photographers could have a juicy assignment. More than a century later, the media took down Howard Dean. Then they wrote about it.

J. Hale Russell ’05 is an English concentrator in Adams House. He was The Crimson’s arts chair in 2003, and writes a regular column on alternate Thursdays.