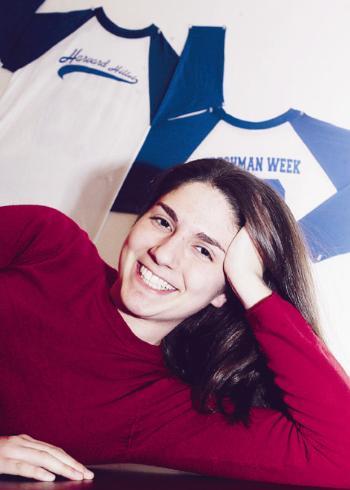 At Harvard Hillel last Thursday, 40 students stood witness to a break from the past 60 years of the Jewish organization’s history.

While a traditional reading of the Torah, a collection of the first five books of the Hebrew Scriptures, started the coordinating council’s meeting last week, students at the gathering were led—for the first time—by a female undergraduate, Anna M. Solomon-Schwartz ’06.

Although over the last 10 years, according to Solomon-Schwartz, Hillel’s Undergraduate Steering Committee has had a balance of men and women, Solomon-Schwartz’s term marks the first time a woman has been elected to the presidency of Harvard’s largest Jewish organization.

“Because Hillel is a community that is welcoming to such a wide variety of students, it’s fitting that it now has a female president,” says Solomon-Schwartz. “My election is consistent both with the increased opportunities for women nationwide as well as Hillel’s progress in serving an increasingly diverse group of students.”

When placed in a religious context, Solomon-Schwartz’s presidency might seem a bit unconventional.

“In the conservative denomination [of Judaism], it is common for women to be in positions of leadership. It’s more seldom in Orthodox communities,” says Josh I. Rosenbloom ’05, who served as president last semester and is an Orthodox Jew.

But Rosenbloom says it isn’t strange to see Solomon-Schwartz step into his position this year.

“The president is basically responsible for everything at Hillel, but it is a secular position,” he says. “It’s just like being president of any other large organization on campus.”

Solomon-Schwartz says that being a woman has never held her back at Hillel.

“I have flourished as a woman at Hillel. It’s a very supportive, diverse community,” says Solomon-Schwartz.

As a modern Orthodox Jew, Solomon-Schwartz alternates between going to Orthodox services and those of the student conservative minyan on campus. She says she has always been impressed by the positive relations between the Jewish denominations at Hillel.

“That was one of the reasons I had wanted to come to Harvard and to be involved with Hillel. People here go beyond being respectful and want to understand each other,” she says.

Solomon-Schwartz ran for president unopposed and easily won in an informal vote of raised hands.

“There is universal consensus that she’d do a great job. She has an awe-inspiring amount of energy,” says David K. Hammer ’06, head of Hillel’s Leadership Council.

Many members of Hillel never even realized that there had not been a female president in the past.

“I was surprised when I found out that Anna was the first female president, since there were already so many positions filled by women,” says Alexander L. Edelman ’07, dining hall coordinator at Hillel.

Aaron K. Harris ’06, the drama supervisor at Hillel, noted that other women have held high-level positions within the Jewish organization. For example, he says, the chair of the board of the Hillel Orthodox minyan is a woman.

Harris says the fact that Solomon-Schwartz is a woman is not as important as her leadership abilities.

“[Solomon-Schwartz] is very grounded in her beliefs and she is open to everyone. It will help her pull in many people to Hillel,” says Harris.

JOURNEY TO THE TOP

When Solomon-Schwartz first arrived at Harvard, she was inspired by the powerful presence of the Jewish community, despite having attended a Jewish day school for 13 years in her hometown of Rockville, Md.

“The community was extremely warm and friendly, always reaching out to new students,” says Solomon-Schwartz.

Motivated by her positive experiences during Freshman Week, Solomon-Schwartz applied to be a freshman liaison as a first-year undergraduate and eventually became a co-coordinator for Freshman Week activities.

“My Freshman Week experiences are what sparked my interest in Hillel, and I just wanted to give back to the community that was so welcoming to me,” she says.

From Shabbat dinners to John Harvard’s bar mitzvah, Solomon-Schwartz says she helped organized a multitude of events to introduce Hillel to newly-arrived students.

Solomon-Schwartz says she has already begun planning for the upcoming year.

“As president, when people give me ideas, I will be empowered to do something about them,” says Solomon-Schwartz.

She says social service is a huge tenet of Judaism and while social action at Hillel has been relatively strong in the past, she wants to develop more volunteer opportunities.

“Many of the people who come to Hillel are already very involved with community service in the larger Harvard and Boston community. I want there to be more opportunities at Hillel to further such involvement,” she says.

Solomon-Schwartz also says she wants to further integrate Hillel programs and activities into the campus at large.

“Hillel is a catalyst for Jewish life on campus. I want to bring that Jewish life into Houses and freshman dorms,” says Solomon-Schwartz.

Above all, she says she would like to make sure the resources already offered at Hillel are readily available to all students.

“I want to make sure that people know that it is a place to turn to if they are interested and emphasize that Hillel is all-inclusive and is made stronger by each individual.”

—Staff writer Shayak Sarkar can be reached at ssarkar@fas.harvard.edu.