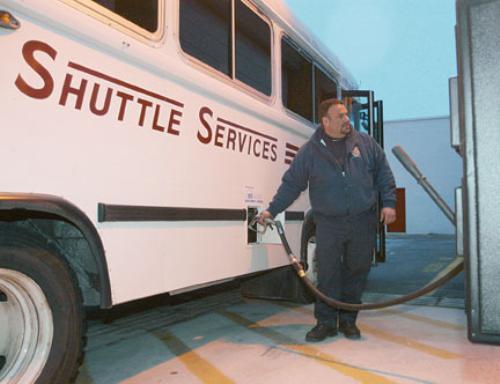 Leading the way to a greener Ivy League, Harvard officials announced last week that the University’s shuttles and maintenance trucks are now running on biodiesel, an environmentally-friendly fuel made from soybean oil.

The new fuel, which emits fewer hydrocarbons, sulfates, carbon dioxide and other greenhouse gases than conventional gasoline, promises to provide a number of environmental and health benefits in a cost-effective way, according to David Harris Jr., general manager of fleet management services and shuttle services for University Operations Services (UOS).

“We researched many options, and biodiesel was clearly the least cost of entry to the cleaner burning alternative fuel market,” Harris said.

Harvard is the first—and currently the only—school in the Ivy League to use biodiesel to fuel its vehicles, although some 400 fleets across the country now use the new fuel, according to a press release issued by the National Biodiesel Board.

Harris said the University’s switch to biodiesel shows a commitment to the community.

“Our shuttle buses drive down the streets of Cambridge past houses and other schools. We have a responsibility to be a good neighbor and be as environmentally-friendly as possible,” he said.

The benefits of using biodiesel are two-fold, Harris said. It reduces pollutants that are potentially harmful to human health and it reduces greenhouse gases, which are thought to be linked to global warming.

This American-made fuel is extremely versatile and can be used in its pure form (B100) or mixed with petroleum diesel.

Harvard will use B20, a mixture of 20 percent biodiesel and 80 percent diesel, in all 25 of its diesel vehicles and equipment, including shuttle buses and mail, solid waste and recycling trucks.

Before choosing biodiesel, the University assembled a team of researchers led by physics graduate student David M. Thompson to identify alternative fuels that could potentially reduce Harvard’s negative impact on the environment.

During the summer of 2001, Thompson and two research partners performed extensive tests on alternative fuels to determine their effect on urban air pollution and global warming.

In addition to being environmentally-friendly, biodiesel is a convenient and economical alternative fuel, according to Thompson.

“Biodiesel can be pumped into any diesel vehicle, so the only entry cost of the program is the construction of the new fueling station,” he said.

In light of Thompson’s recommendations and a preliminary test of the fuel this summer, the University used $60,000 in fleet management reserve funds to purchase the necessary fuel pumps earlier this year.

The fueling station, located across the river near the football stadium, has been offering Harvard’s diesel vehicles 24-hour refueling services at a wholesale price since its Jan. 5 completion, Harris said.

Harris said that because Harvard vehicles used over 60,000 gallons of diesel last year, he expects to recover the $60,000 in the next five years.

The fueling station will also support UOS during emergency campus maintenance activities, such as the clearing of snow.

As Harvard procures new vehicles, UOS will also look to replace gasoline vehicles, which compose roughly 65 percent of Harvard’s fleet, with diesel vehicles that can utilize the new fueling technology.