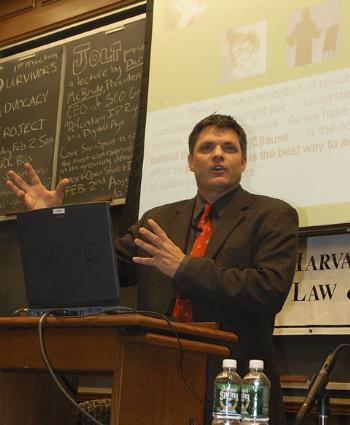 Darl C. McBride, President and CEO of The SCO Group, the company targeted by the MyDoom virus, speaks about intellectual property at the Law School on Monday.
By Zachary M. Seward, Crimson Staff Writer

The e-mail virus which tore through the Internet at a record pace last month continued to flood Harvard in-boxes this week, though its spread has slowed in recent days.

And on the campus of Harvard Law School (HLS) Monday, the man targeted by the attack faced a hostile and largely unsympathetic crowd.

The ominously-named MyDoom virus launched an assault last week against The SCO Group, whose president and CEO, Darl C. McBride, spoke at HLS on the implications of a copyright lawsuit his company has filed against IBM.

McBride called the attack, which has crippled his company’s website, an act of “cyber-terrorism,” while others in the audience saw the MyDoom virus as digital disobedience.

McBride has emerged as public enemy number one in the eyes of advocates for open-source—or uncopyrighted—software since SCO claimed last year to own code in the open-source operating system Linux, which has gained considerable popularity in the computing world as a viable alternative to Microsoft Windows.

Supporters in the Linux community have claimed responsibility for an earlier, smaller-scale attack on the SCO website, but authorities were still searching for the origin of the MyDoom virus.

“I think the best term for it is ‘hacktivism,’” said John G. Palfrey ’94, executive director of the Berkman Center for Internet and Society at HLS.

A variant strand of the MyDoom virus targeted Microsoft yesterday, but the company said in a press release that its website withstood the attack.

Computers infected with the virus, which is transmitted through e-mail attachments, are programmed to send similar e-mails to other computers. The infected machines unwittingly conducted a denial-of-service attack against SCO and Microsoft by flooding those companies’ websites with hits.

“By midnight Eastern Time Saturday, our website was flat on its back,” McBride told the audience.

“Judging from the number of calls and e-mails we’ve gotten today, this event might be just as controversial as last night’s Super Bowl halftime show,” Palfrey said. “And perhaps just as revealing.”

And while the debate over intellectual property and copyright protection played out at HLS, MyDoom continued to wreak havoc on some Harvard students’ computers.

“Apparently I’m sending out viruses without knowing it,” said Brianne C. Janacek ’07, whose computer was infected with MyDoom after she downloaded an attachment from the Texas Club e-mail list.

E-mail users across the globe continue to receive virus-infected messages, usually with the subject line “test.”

Janacek said she received one MyDoom e-mail from a list for incoming first-years at Tufts, a university to which she never applied.

The nearly 100-person audience at the HLS event, which was sponsored by the Harvard Journal of Law & Technology, remained civil throughout McBride’s presentation and the question-and-answer session which followed. But the audience’s general disapproval was clear.

“Outside of your individual rights and capitalistic notions, how do you justify your actions are promoting science?” one attendee asked.

“Society and individual rights are what have to be balanced, and that’s what happens in the court system everyday,” SCO Senior Vice President Chris Sontag responded.

On Sunday, after someone posted McBride’s home phone number on the Web, the onslaught against SCO moved to the phone lines as well.

“Right when I’m trying to enjoy the Super Bowl, the phone was ringing off the hook,” McBride said.