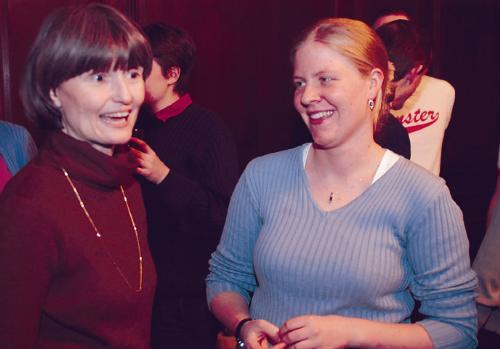 Students in Dunster, which has not had resident BGLTS tutors since 2002, charged over the Dunster open-list last week that the House was “exceptionally homophobic” and that students were afraid to be openly gay in Dunster.

“I myself have been harassed numerous times, and the same has happened to my friends,” wrote Joseph R. Geschlect ’06 in an e-mail encouraging fellow Dunster students to attend the Queer-Straight Social held last night.

Geschlect cited examples of neighbors tearing down his holiday decorations and decorations for his friend’s coming-out party.

The introduction of the new tutors—Mafalda Cardim and history graduate student Daniel Sargent—came in an e-mail to the entire House Friday in response to the debate sparked by Geschlect’s e-mail. Geschlect said that Dunster was one of only two Houses without resident BGLTS tutors.

Cardim, a tutor in Dunster for a year and a half, said she volunteered to be a BGLTS tutor at a regularly-scheduled tutors’ meeting Thursday.

“We will basically begin to call the things we already do by their names,” said Cardim, who said she hosts an informal gathering every Tuesday to watch “Queer Eye for the Straight Guy.”

Geschlect said last night’s social, which he helped organize, aimed “to stop the sense of divisiveness” in Dunster.

“We’re students just like anyone else,” he said. “Straight friends often get flack for their gay friends, and that also needs to stop.”

Dunster resident Natalie M. Orr ’06 was one of about 40 people who attended last night’s social.

“Several of my gay friends were being harassed…and I feel it’s just horrendous,” said Orr, who added that some of her gay friends have not had problems.

Ann Porter said one reason for adding the resident BGLTS tutor was that Dunster’s sophomore class is larger than usual and “could really benefit from an in-house tutor.”

“The perception [of homophobia in Dunster] has been very frustrating, because there hasn’t been a lack of caring or of trying,” Porter added.

Geschlect said that although “some of it is just perception, much of it is very real...partially because there were no BGLTS tutors, and because many students see the Porters as more conservative and so that they don’t like BGLT students,” said Geschlect.

But Geschlect said he has found the Porters to be nothing but supportive.

Geshlect pointed to the previous lack of BGLTS tutors in Dunster as one reason for the uncomfortable environment.

“The wonderful [BGLTS] tutors in Mather House have been a great resource, but they cannot be a permanent substitute for our own in-residence tutors,” he wrote in the e-mail.

“If a student has a real issue, it’s going to be at three in the morning,” Haynie said.

Haynie said this support work rather than social activities is the primary responsibility of such tutors.

“We tried to host more active events in the past, but students just weren’t interested,” Haynie said. “But the House was once really gay-friendly, the Senior Tutor was gay, and perhaps it was felt it wasn’t needed.”

Sargent said that the new tutors were planning a variety of activities but would be sensitive to what he said was the current reliance of the Dunster gay community on Mather House’s events.

“I think we want to be careful not to conflict with Mather events, to not become competitive, but rather complimentary–to realize that we’re dealing with a community that extends across Houses,” Sargent said.

Erik P. Garrison ’06, a Dunster resident who attended the social, said he thought having the BGLTS tutor would help combat any perception that Dunster was homophobic.

“It changes perception, and perception is reality,” he said.

Cabot is now the only House without a BGLTS advisor.