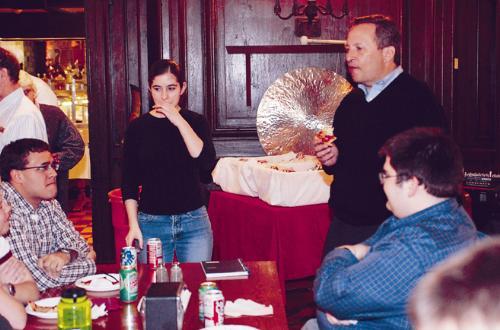 Instituting A-pluses and A-plus-pluses into the grading scale could be one way of ameliorating the problems caused by grade inflation at the College, University President Lawrence H. Summers told a group of about 60 students, tutors and House Masters at a study break in the Adams House dining hall last night.

Summers said that the primary problem with the current system lies in its lack of integrity.

If we want to have a system that says that an A or an A-minus means above average work, thats fine. But to say that A or A-minus categorizes extraordinary work would be untrue, he said.

Responding to a students question about how deflating grades would increase competition, Summers said that the Colleges priority should be the recognition of excellence.

It seems odd to me, Summers said, to have two grades by which to measure the top half of all students, and seven grades for the bottom half.

In every activity that Ive ever engaged with, whether its sports or academics, the people who are in the top five or 10 percent have performed at a very different level than the people in the top quarter, he added. It seems like we should recognize that more.

But Lowell House Master Diana L. Eck said that in her experience, giving higher grades is a testament to the hard work of students.

Alluding to the sophomore tutorial in religion that she taught this fall, Eck said that criticizing student papers and allowing for revision inevitably leads to higher grades, but also higher levels of learning.

Eck added that she gave almost half her class As because her students deserved them.

In response to Ecks anecdote, Summers said that he also wanted to examine inequity in the grading system across departments.

It is just a fact that the highest grades are in the humanities, he said.

Students voiced concerns that low grades in the sciences were keeping their peers out of medical school, but Summers said that most people regard Harvard grades in their context, adding that he was hesitant to instrumentalize our grading system to push more kids into medical school.

Summers also noted that the curricular review, which the College launched last year, was installing greater flexibility for students, for example, further incorporating the arts into the academic curriculum.

But Summers added that how you draw the line and provide the resources is an increasingly complicated question, not only with regards to the curriculum, but also with two of Harvards most recent initiatives, the new financial aid policy and the launch of a center to encourage stem cell research.

The new financial aid policy waives tuition completely for families making less than $40,000 a year and reduces the sum for households making between $60,000 and $40,000 a year.

Summers said that one in every six Harvard families will benefit from the change.

One student asked Summers whether he thought Harvard would one day eliminate tuition completely.

It would never be economically feasible, Summers said, and furthermore, Im not sure that it would even be a good idea. Why would we not ask people who can pay tuition to pay tuition when we have some many other priorities, like hiring more faculty to be advisers?

At the study break last night, Summers also fielded questions about expansion into Allston, the status of women at Harvard, the quality of teaching fellows and the future of Harvard College Library.

Staff writer Lauren A. E. Schuker can be reached at schuker@fas.harvard.edu.