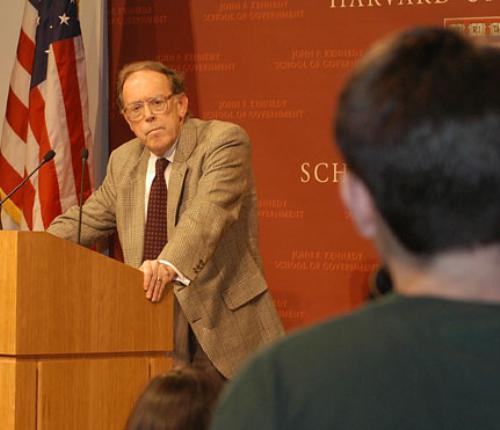 Kevin Phillips, author of American Dynasty: Aristocracy, Fortune, and the Politics of Deceit in the House of Bush, looks on as a first-year asks a question during Phillips’ discussion of his book at the JFK Jr. Forum yesterday.
By Yiyang Wu, Contributing Writer

Kevin Phillips ’64, the man the Wall Street Journal described in 1982 as the nation’s “leading conservative electoral analyst,” is not your typical Republican.

The chief elections and voting patterns analyst for Richard Nixon’s 1968 presidential campaign is not even a Republican anymore—in 2002, he re-registered in Connecticut as a political independent.

Last night, the author of the newly published American Dynasty: Aristocracy, Fortune, and the Politics of Deceit in the House of Bush, attacked what he called the “Bush Dynasty” and its ties to special interests before a full house at the Institute of Politics’ JFK Jr. Forum.

Phillips argued that the Bush family is dangerous because both the current and former President Bush share a “unique continuity” of supporters and opponents, because the family maintains a close relationship with the intelligence community, because both have focused on the Middle East during their presidencies and because the family’s business has had dealings with the bin Laden family.

Phillips urged the public not to ignore the similarities between the 41st and 43rd presidents.

“You cannot in any sense take the one or two big differentiations and take them ahead of shared interest groups, talents, loyalties to the top 1 percent, grudges in the Middle East, and connections with bin Laden,” he said.

Phillips said that George W. Bush, the 43rd president, represents the restoration of the Bush dynasty, which began with his father, George H.W. Bush.

Samuel Bush was president of the Buckeye Steel company, which was partially owned by Standard Oil, and John Foster Dulles, the lawyer for Walker’s company, Harriman, eventually became director of the CIA, Phillips said.

Citing evidence from a 1992 congressional investigation, Phillips argued that the senior Bush played a role in persuading Iranian hostage-takers to postpone the return of the hostages until after the election of 1980, to avoid the boost their return would give to Democrat incumbent Jimmy Carter.

“If you have this backdrop and sense of being able to feed off the intelligence community, it explains these connections,” Phillips said.

Phillips criticized what he said was American media’s failure to examine the Bush “dynasty.”

“The media failed to grapple with the dynastic aspects of the 41st and 43rd presidencies together,” he said. “I still come up with the sense that the media cannot rise to a larger occasion.”

He called this the result of the media becoming more “corporatized.”

“The public’s right to know seems to be yesterday’s trumpet, not today’s,” he said.

Phillips fielded questions ranging from George W. Bush’s born-again Christian experience—which he called “probably genuine” while charging that Bush’s religious discovery coincided with his political ambitions—to a comparison between the Bushes and the French monarchs Louis XIV and XVI.

Though Phillips said he does not support Bush in the upcoming election, he did not hesitate to criticize the Democratic challengers.

Phillips said that the Democrats have “less power than a wet Kleenex” and that “John Kerry doesn’t seem to evoke a huge amount of enthusiasm from anyone I know, even the most ardent Bush-haters.”

“I don’t think the die is cast,” he said. “I think [the Democrats] will do better this year, but I don’t know if they’ll do enough better.”

“The fact that he was a Republican made his claims seem more credible to me. I don’t feel like he would criticize his own party if he didn’t have a good reason,” said Joanna J. Parga ’07.

For others, however, it was Phillips’ candidness that made his speech appealing.

“He was very straight forward and willing to criticize both the administration and the media, the Democrats and the Republicans,” said Waheed A. Gardezi ’07.

At various times during the speech, Phillips called those pivotal in the Bush administration “no talent preppies.” He said that without his father, George W. Bush would be the “second vice president of the second National Bank of Amarillo,” evoking a laugh from the audience.