Crimson Right at Home on Road 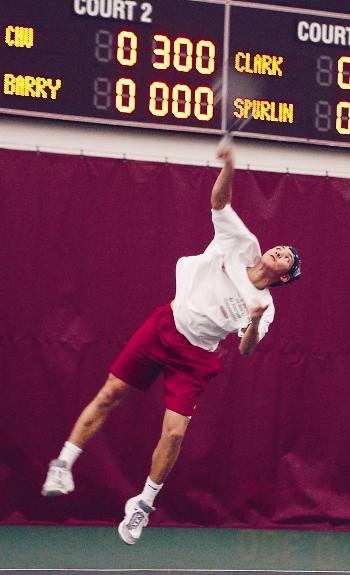 Junior Jonathan Chu, shown here in earlier action, clinched the victory for the Crimson with a comeback win.
By Rebecca A. Seesel, Contributing Writer

If you ignored the sunshine and the eighty-degree weather on Sunday, you might have thought you were still in Cambridge. You’d be wrong—but with alumni, family and the Dean of Harvard College watching the No. 16 Harvard men’s tennis team defeat No. 36 Auburn 6-1 at Bollettieri Tennis Academy, the mistake would be understandable.

It seems that nothing, not even the blazing Bradenton, Fla. sun, can stop the Crimson (4-2, 0-0 Ivy) nowadays. The team has won three straight dual-meets against ranked schools and has watched its ranking jump from No. 29 in mid-January to the current No. 16.

“Obviously, people are aware of [the ranking], but it’s a little bit like being on a highway and then looking at a road sign on the side—that’s why you tend to have a crash,” said Harvard coach David Fish. “Our theme this year is [that] behind every mountain is another mountain, and you have to climb it all over again.”

Over the weekend, the Crimson maintained its focus on competition and beat the Tigers (3-3, 0-0 SEC) in efficient fashion. Displaying consistently strong play, Harvard swept the doubles competition and took the all-important doubles point for the fifth match in a row.

In contrast to the Crimson’s duo dominance was the team’s only conspicuous weakness, a dangerous mid-meet hiccupping pattern. Though deep reserves have repeatedly propelled the Crimson to victory, the squad has made a habit of winning the doubles point, only to fall behind in singles play.

Sunday proved no exception. Of the six singles matches, Harvard dropped three first sets as the team struggled to find its groove in extreme wind. Senior George Turner, who played the fifth match, suffered a quick and uncharacteristic 0-6, 0-6 loss to opponent Nick Lane.

“[Lane] was obviously in the zone,” junior Jonathan Chu said. “[Turner] is one of our toughest competitors, if not the toughest competitor on the team, and the guy he played was on fire. It’s one of those days [where] you just try to win with the hand you’re dealt, and it was unfortunate for him to run into a guy who was just playing unbelievably.”

Aside from Turner’s match, however, the Crimson came back in dominant fashion.

Co-captain David Lingman, who played in the first singles slot, took his match 6-2, 6-4 over Gabor Zoltan.

“In the first set, I was still kind of adjusting,” Chu said. “Then I started to become a lot more aggressive, and I tried to attack [so as to] minimize the effects of the wind on my shots.

“I pretty much forced my opponent to hit shots under pressure,” he added, “and things started to go in my favor. I just took it and ran with it.”

The contest, which drew a substantial Crimson fan base, was held at the renowned Bollettieri Tennis Academy, an opportunity springing from a 30-year friendship between Fish and Nick Bollettieri.

“They really rolled out the red carpet for us and couldn’t have made us feel more welcome,” Fish said. “After you get through the Cambridge winter, it’s nice to have a couple of games outside.”

Indeed, the match marked the first time the team has played outside since October.

“The really dangerous point in the season for us is [the first time] going outdoors,” Fish said. “With the Harvard schedule, there’s usually no way to be able to hit outside for even a day before you’re playing someone that’s been playing outside all the time.”

This year was different, though. According to Lingman, the players put much effort into preparing for the change in weather. They wore long sleeves indoors to simulate the warmer conditions and sometimes employed older, scuffed tennis balls to reproduce the longer, slower points which are more typically played outside.

“We went down on Friday, and we had two practices on Saturday to try to get used to the conditions,” Chu said. “It was really windy, it was about eighty degrees, and the sun was pretty hot and taxing.”

Braving the heat were many Harvard fans, among them “honorary coach” and Dean of the College Benedict H. Gross ‘71.

“I joined the team at Bollettieri’s academy…on Saturday for their practice (although hitting with me is no practice for them),” Gross said.

While his rallying skills might have not have tested the Crimson, Gross did “lead” a fourth doubles team to victory in an exhibition match.

“I now plan to retire,” Gross said, “as the only undefeated coach in Harvard’s history.”