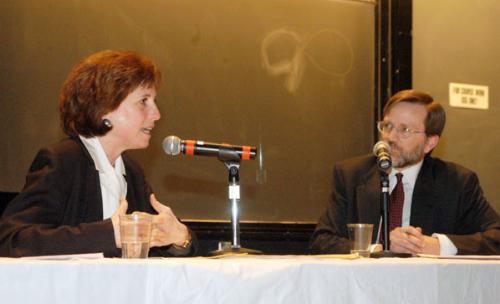 Theory met practice as an evangelical theologian and a gay rights lobbyist squared off on the issue of same-sex marriage before a Science Center audience of about 150 on Saturday night.

The Rev. John C. Rankin, president of the Theological Education Institute in Hartford, argued that gay marriage would undermine the moral and religious foundations of American society, while Arline Isaacson, co-chair of the Massachusetts Gay & Lesbian Political Caucus, focused on marriage as a “legal gateway” to essential rights.

Rankin, a 1991 graduate of Harvard Divinity School, said the “inalienable rights” guaranteed to Americans are essentially based on the teachings of the first two chapters of the Book of Genesis, which he said define marriage as “one man, one woman, one lifetime.” Without a biblically-rooted legal and moral system, he argued, there would be chaos.

Isaacson, who successfully lobbied for the Gay and Lesbian Civil Rights Act, passed by the Massachusetts legislature in 1989, argued that “might makes right” already exists in practice.

“Straight people are in power,” she said. “There are more of them and less of us, and so you’re saying, ‘I have the right to marriage but I won’t share.’”

These benefits—over 1,400 of them, by Isaacson’s count—can only be fully obtained through marriage, she said, arguing that the alternative of civil unions would only award gays and lesbians 25 percent of the rights of married people.

“You have no right to impose your biases, your prejudices, your discomfort, your religious beliefs, on my legal rights,” she said.

Audience members were also not convinced by Rankin’s religious arguments.

“You’ve given no reason for why your religion or your Bible should form the morality of this country,” said Leslie Zukor, a first-year student from Wellesley College, during a question-and-answer period.

Some of Rankin’s more controversial remarks drew boos from audience members at several points during the debate. He criticized homosexuality as unhealthy, blamed homosexuality in most cases on childhood abuse, and posited that Christianity is the only world religion that emphasizes the “inalienable rights” of its believers.

But Rankin did have his supporters. He was consistently applauded throughout the debate by a small but loyal group of students, most of whom attended Gordon-Conwell Theological Seminary, an evangelical school in Boston.