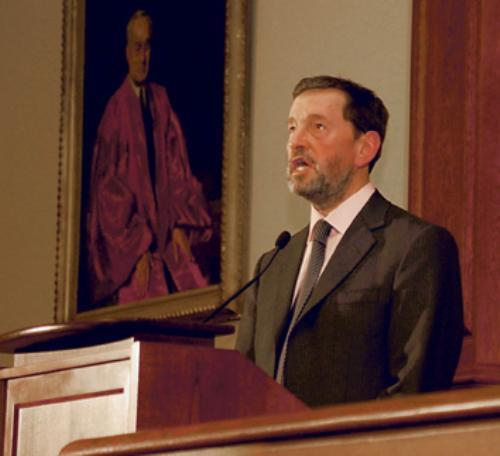 The U.S. will release five of nine British citizens now detained in Guantanamo Bay, Cuba within the next 24 hours, according to British Home Secretary David Blunkett.

Speaking at Harvard Law School (HLS), Blunkett announced last evening that the five Britons being released from the military prison may face trial at home.

The U.S. is currently detaining approximately 640 terror suspects at Guantanamo Bay and has already transferred 12 to their home countries.

Blunkett’s announcement came in a question and answer session after a speech on the global threat of terrorism.

His speech was part of a year-long series on human rights and the War on Terror, sponsored by the HLS Committee on Human Rights Studies.

The Home Secretary since June 2001, Blunkett is responsible for dealing with international crime and terrorism. His anti-terror initiatives include provisions that allow indefinite detention of aliens who cannot be deported until they have a place to go. There have been 14 detentions in Britain under this provision.

Joking that with Britain’s “checkered history in Boston, not everything the British say is welcomed,” Blunkett said that the key to fighting terrorism rests in open dialogue and cooperation among nations. Blunkett said that without security, rights would be jeopardized.

“Another attack like Sept. 11 on the United Kingdom or United States soil will lead to a more draconian response,” he said.

But before another attack happens, politicians should demand that those critical of the government’s policies engage with them to find balances between protective security and maintaining basic rights, Blunkett said.

“Before, we had the ability to prosecute those who engaged in violence,” said Blunkett, but suicide bombers make prevention even more critical.

And this, Blunkett said, calls for security intelligence and surveillance—for laws to be passed through democratic institutions like Congress and Parliament. Citing British Prime Minister Tony Blair’s speech last Friday, Blunkett said that times and enemies are different.

“There is no point to make comparison with the past,” he said.

Blunkett also stressed the importance of fighting the causes behind terrorism. Terrorists who recruit suicide bombers “are able to recruit because of injustice, poverty, and divided societies,” he said.

According to Blunkett, in order to stop terrorism, there is a need to find justice for the Palestinians and ensure security for Israel.

He also reminded the audience that the terrorist threat since 2001 has not simply been for the United States, the United Kingdom, and its allies.

“More Muslims have died in terrorist attacks since 2001” than anyone else, said Blunkett. “Terrorists have been indiscriminate.”

The government is “bending over backwards” in its efforts to ensure that rights are not infringed upon, according to Blunkett.

“Taking hard stances is not reneging on freedoms,” said Blunkett. He pointed out that throughout history, governments who took soft stances allowed the rise of Fascism and Nazism.

He also warned about undermining the leadership of countries trying to fight the War on Terror, such as the government of Pakistan. “We have to be supportive and sensitive. For the future we have two choices: isolation, or finding mechanisms to put behind us divisions to find solutions for the future,” said Blunkett.

A Fletcher School student who refused to give her name said that Blunkett “was very persuasive,” and that it was interesting to see the contrast between the British and U.S. perspectives.

Other students, such as Tariq Baloch and Siddhauth Ohar of HLS said they were a bit disappointed that Blunkett did not oppose the detentions at Guatanamo Bay more vociferously. “He needs to stand for his principles,” Baloch said.

—Material from the Associated Press was used in the reporting of this article.