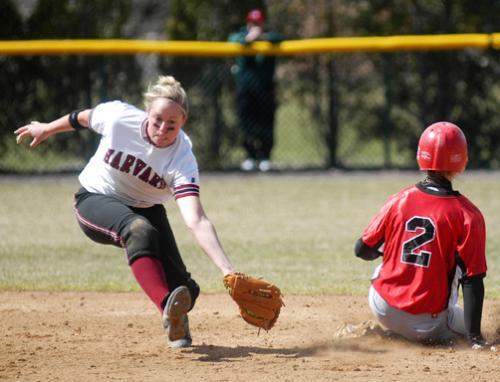 The Harvard softball team headed into this weekend’s pair of doubleheaders with an unblemished Ivy League record, but it suffered through an up-and-down stretch that included a two-home run, five-RBI performance from senior Rachel Goldberg and a 20-inning scoreless streak.

The Crimson was finally able to score some runs and held a lead as late as the sixth inning, but succumbed to a late Columbia rally and dropped its third straight game.

Junior Lauren Bettinelli surged out of the gates, giving up only one hit and striking out two through five scoreless innings, before giving up the game’s first run on a Taylor Tierney RBI double.

Harvard answered back in the top of the sixth, breaking a 20-inning scoreless streak with two runs off three hits and carrying a slim lead into the bottom of the inning.

But the Lions had just enough left in their tanks to pull out the win. Nelson knocked a two-RBI double down the right field line, and pitcher Megan Ivy staved off a Crimson charge in the final inning.

Bettinelli, sophomore Pilar Adams, junior Cecily Gordon and freshman Julia Kidder had the only hits for Harvard, all singles. Bettinelli took the loss and dropped to 7-6 on the season.

Harvard’s scoring drought, begun in the seventh inning of the weekend’s first game against Cornell, carried over into the first game of a Sunday doubleheader with Columbia.

The Lions wasted no time in capitalizing on the Crimson’s misfortune, jumping out to an early lead and hanging on to the shutout.

Columbia scored first in the bottom of the second, when an error by co-captain Kara Brotemarkle allowed Lacie Nelson to touch home.

The Lions extended their lead in the next inning with a Marrisa Marconi home run. The three-RBI blast put the lead at 4-0, where it would stay for good.

Harvard struggled offensively, mustering only one hit, from Adams, and earning only one free pass. The Crimson stranded three runners.

Brotemarkle, Bettinelli and sophomore Michelle McAteer all pitched, with Brotemarkle (7-8) taking the loss.

Both teams must have used up all their firepower in the first game, as Saturday’s second contest turned into a defensive struggle. Despite a three-hit jewel by Lauren Bettinelli, the Big Red handed Harvard its first Ivy League loss, 1-0.

A first inning sacrifice fly by Lauren May proved to be the difference in this one, pushing across Kate Varde for the only run Cornell would need.

For its part, Harvard could never put together the streak of big plays needed to get on the scoreboard. In seven innings, the Crimson stranded 11 runners on seven hits.

“We were hitting the girl [Cornell pitcher Whitney Smith] really well, but we were just hitting it right to them, and we weren’t getting the job done with runners on second and third,” said co-captain Sara Williamson.

Harvard had one last chance in the top of the seventh when freshman Virginia Fritsch singled to set the table for Bettinelli. The pitcher grounded out to second, however, to end the game and the Crimson’s Ivy League win streak.

But Williamson believes the team learned an important lesson in defeat.

“The Ivy League is always a crap shoot. It’s never a hands down win for anybody, and it’s important to remember that any team can beat any other team on any given day,” Williamson said. “If you let down on just one pitch or one at bat, you could lose a game on it.”

Goldberg kept pace with Cornell all by herself in Saturday’s first game, pounding her first two home runs of the season and finishing with five RBI. Her teammates pushed the effort over the top, scoring four more runs in the 9-5 victory over the Big Red.

Harvard started the scoring in the third inning, when Kidder scored on a bases-juiced single from Fritsch. Cornell quickly recorded two outs, but Williamson kept the inning alive with an RBI single to left that loaded the bases.

“We hit the ball well from the start,” said Williamson, “but about the second inning we really started putting them in the gaps, and in the third we were able to push a couple of runs across and then keep the bases loaded for Rachel.”

Goldberg stepped to the plate and matter-of-factly broke the game wide open.

“I was just looking for a good pitch to drive, and it just happened to go over the fence,” Goldberg said.

Harvard scored twice more in the top of the fifth, when junior Lauren Stefanchik and freshman Susie Winkeller touched home on a passed ball and a wild pitch, respectively.

Cornell put a dent in Harvard’s lead with a Melissa Hientz three-run shot in the bottom of the fifth, bringing the Big Red within five, but the Crimson’s big bats had an immediate response.

In the top of the sixth, Goldberg stepped up to the plate, and again sent the ball sailing, this time for a solo home run that put the game permanently out of reach.

“The second time up she threw me a change-up that I saw coming,” Goldberg said.

Brotemarkle gave up eight hits but had eight strikeouts in the complete-game effort.

Harvard takes to the field next on Tuesday, playing a doubleheader against Holy Cross in Worcester, Mass. starting at 3 p.m.