ON HOCKEY: Crimson So Close To Becoming Hockey Power 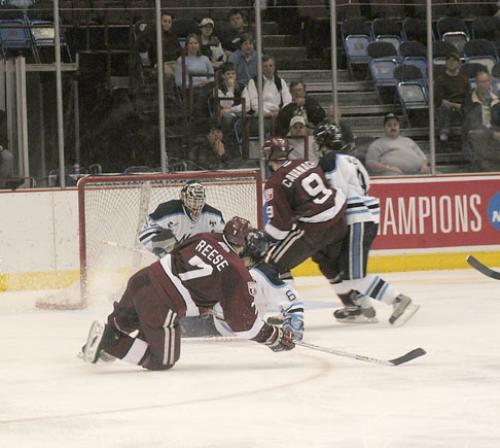 ALBANY, N.Y.—A season of high expectations, of ups and downs and stops and starts, came to an abrupt end in the opening round of the NCAA Tournament, the third time in three seasons that Harvard has bowed out early in the NCAAs. Taken in total, it is a hard season to judge. But if you only consider the season’s first step and its last, mild disappointment is the only pronouncement I can make.

The Harvard men’s hockey team began the 2003-2004 season, or pre-season I suppose, at the top of both the Coaches’ and the Writers’ ECAC polls. Harvard players cluttered the pre-season All-Conference teams, and the Crimson was picked at No. 6 in the USCHO.com national poll.

Disappointment has followed in the wake of those great expectations. The team that finished second in the ECAC last year—losing to Cornell in overtime—the same team that has now made three consecutive appearances in the NCAA Tournament, struggled against its preseason billing. Harvard finished No. 6 in the ECAC and was a model of inconsistency, but then went on a tear through playoff opponents en route to an ECAC title and that third straight NCAA auto-bid.

“There were points during the year where we had some pretty tough losses,” said captain Kenny Smith. “But all the time the guys were saying: ‘We’re going to make a run, just wait and see.’”

“We won a league championship that I don’t think anyone outside our locker room expected us to win,” he added.

But on the night of Friday, March 26, Harvard’s hot streak was halted, and the Crimson was shown the door of the NCAA Tournament by No. 1 Maine. After staking Harvard to an early lead, the Black Bears mounted a furious third period comeback, overcoming a 4-1 deficit and stunning the Crimson with a 5-4 win.

“I thought we executed our game plan to a ‘T’ for two periods,” said Harvard coach Mark Mazzoleni. “I’ve got to give [Maine] credit with the way they came at us in the third and the way they finished the job.”

“[Maine] has some individual players that can turn the tide of a game and I think they had some guys step up and make some big plays for them,” Mazzoleni added.

“Maine was the most difficult team we’ve played all year in terms of shutting them down defensively,” agreed Smith. “I thought we played hard the whole game…we battled hard, but they kept coming and coming.”

Maine ended Harvard’s season for the second time in three years, but Mazzoleni and Smith were able to take some positives out of the emotional loss.

“It’s a very tough way to end your season,” Mazzoleni said. “You look at the great programs over the years—you just don’t get to center stage unless you go through experiences.”

“And this is a very, very difficult experience to handle,” he added.

Reporters love juicy quotes, and so it was that a frustrated Mazzoleni (after a win over a nationally-ranked out-of-conference opponent, go figure) issued his roughly mid-season assessment of the team.

“We haven’t gotten to where we should be this year,” Mazzoleni said after Harvard’s 5-3 win over UMass at Bright.

“We’re not that talented,” he added. “I don’t know where the perception [comes from] that we’re talented. We have 12 kids that are drafted—a lot of them are drafted on size and potential.”

With all due respect to Mazzoleni, his team was (and still is) very talented. It’s just not consistent. That’s a point he made loud and clear earlier this season when he was asked what he expected from his team during a pre-Christmas game against Princeton, Mazzoleni turned the question around on this reporter.

This reporter, in a much lower voice: “I don’t know.”

For much of the season, that was the question. Which Harvard team would show up, the one that beat BU and UMass or the one that was swept in its season series against Princeton?

Over its last eight games, that question was answered and the Crimson created a strong finish to a previously mediocre season. But the end result was still something shy of where Harvard hoped to be come late March.

“I think Harvard is knocking on the door and very close to being one of the top-tier teams in the nation,” Smith said. “[When the seniors signed on to come to Harvard], the coaches talked about bringing this program back to national prominence. That’s been our goal our entire four years.”

And, by one measure, the team and its coaches have been successful in attempting to return Harvard to national prominence. Name for me, if you can, all the teams—there are only five of them—that have been in the NCAA Tournament the last three seasons.

Obviously there’s Minnesota, winner of two straight national titles. And the teams that the Gophers beat in those two finals, Maine (2002) and New Hampshire (2003). CCHA powerhouse Michigan makes the cut as well. The last of the five is the Harvard Crimson.

Clearly being grouped in with Michigan, Maine, Minnesota and New Hampshire is pretty heady company. But while those teams have won national finals, or lost in them, or at least made the semi-finals, Harvard alone has gone winless in three chances. That is what separates those teams from Harvard, postseason victories versus postseason futilities.

While the Crimson’s first round loss in 2002 might have been understandable—they were, after all, coming off a shocking overtime-filled run through the ECACs that caught almost everyone by surprise—the team’s early exit with the hottest offensive player in the East in 2003 (Dominic Moore ’03, just my opinion, but the numbers provide a pretty compelling argument) and a talent-laden roster projected as one of the best in the nations this year, have been disappointments.

“There’s great expectations at our program,” Mazzoleni intoned. “Programs like Maine are a measuring stick for where we want to go.

“We’re still knocking on the door trying to take that next step…[But] I very much believe we’re going in the right direction.”