Lingman, Chu lead No. 21 Crimson over No. 19 Tulane in NCAA Regional 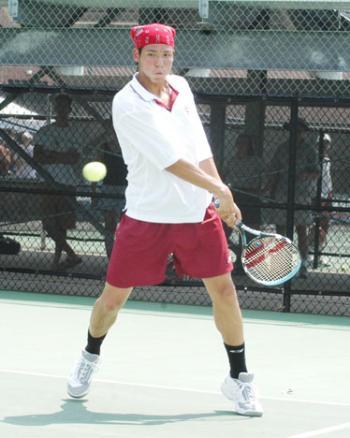 No. 89 Jonathan Chu clinched Harvard's 4-2 win over No. 19 Tulane with a 6-3, 6-4 victory over No. 46 Dmitriy Koch yesterday afternoon.
By Rebecca A. Seesel, Crimson Staff Writer

But for the No. 21 Harvard men’s tennis team, it certainly does. After all, that’s where the Crimson will compete in its first Sweet 16 since 1998—an honor earned by a tight 4-2 victory over No. 19 Tulane yesterday in the regional championships of the NCAA tournament.

When the match was clinched, the Harvard players poured onto the courts to celebrate, screaming and jumping in front of the massive crowds that flooded the Murr Center.

The fans were not disappointed—from the beginning, the match was more than dramatic.

Though the senior doubles team of Mark Riddell and co-captain David Lingman rolled to an 8-1 victory, the other two matches remained knotted.

The doubles competition rested on the shoulders of senior Chris Chiou and junior Martin Wetzel. Under pressure, the latter produced shot after spectacular shot, jumping and screaming on the court to the delight of the fans.

Then, at 8-7, after missing a handful match points, Chiou pulled a return down the line which his Green Wave opponent couldn’t quite angle over the net.

And so Harvard clinched the doubles point, the momentum and the attention of every fan in the stadium.

“I guess we’ll see how important it will be,” Chiou said right after the win, “but hopefully, it proves to be very important. It was tense. I’ve had trouble with tight situations before...but it was fun to get through one.”

The singles competition was similarly close in the beginning. Freshman Jack Li finished quickly, suffering a 6-1, 6-4 defeat which knotted the dual match score at 1-1.

Of the remaining five matches, the Crimson secured four first sets, one in a tiebreak and two by a 6-3 margin.

The tide turned with Wetzel’s match in the fifth slot, as the German scored a 6-3, 7-6 (4) win which revved up the crowds and put Harvard up for good.

“I knew he was going to be tough,” Lingman admitted, adding “it was a good match.”

Last week, the senior had said that he hoped Harvard would face the Green Wave so that he could have a crack at Kogan.

With the co-captain’s victory, Harvard was just a point from clinching a trip to Tulsa, and Chu appeared about to close out his match.

But when Chu fought his way to match point, his opponent called for the trainer, the second such time the Green Wave claimed an injury timeout at a pivotal moment.

The icing lasted long enough for co-captain Cliff Nguyen to lose 7-6 (3), 4-6, giving Tulane a point and giving Chu something to think about.

“I knew that he was going to try to procrastinate the inevitable for as long as possible,” Chu said with a smile, pointing to the match on the next court which his teammate Riddell led.

“I knew Mark was doing well, too, so I wasn’t really worried about how long [my opponent] was going to take. I would have been here all night if I’d needed to.”

And when the time out ended, Chu’s confidence proved justified. The junior met a second serve with a return his opponent couldn’t quite handle, and his match—a 6-3, 6-4 win—secured Harvard’s.

“We never really know what to expect,” Chu said of the 4-2 margin of victory over a Tulane team which entered the day with a higher ranking but lower seed. “We just train for any conditions, any possibilities.”

That training might have proven key yesterday, as the match was delayed for nearly an hour and a half while the Cambridge drizzle was considered.

Finally, tournament officials decided to play the match inside, a move which surely hurt the Green Wave team which competes inside less frequently.

“I guess they’re used to playing outdoors,” Lingman mused, “so it’s kind of a good deal that we got them indoors [where the Crimson regularly competes].”

But more than that, Harvard appeared sharp. The team was ready, it was inspired, and, as Lingman said, it “came out here with a purpose.”

“I’m impressed with how all the guys, up and down the line, are playing,” he added.

The team hopes its play will continue to impress.

On May 22, the Crimson will travel to the University of Tulsa to take on top-ranked Illinois (28-0, 13-0 Big Ten), the defending national champions, in the Round of 16.