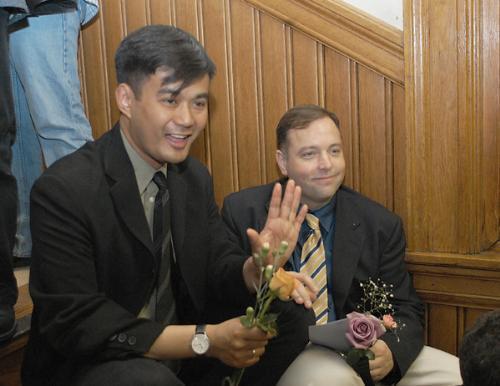 Bren Bataclan, left, waits with his partner Bob L. Parlin '85 for a marriage license at City Hall. The couple was the first same-sex couple to have a commitment ceremony in Memorial Church in 1998.
By Claire Provost, Crimson Staff Writer

Six years after they walked down the aisle in Memorial Church’s first commitment ceremony, Robert L. Parlin ’85 and his partner filed for a marriage license at Cambridge City Hall early Monday morning.

Parlin, who came out as a first-year at Harvard College, met his partner Benjamin Bataclan while dancing at the Boston club Avalon, and they’ve been together for nine years. Their marriage, planned for Thursday at Old Cambridge Baptist Church, will change their everyday life, Parlin said. His partner is self-employed, and cannot receive health benefits under Parlin’s plan without being legally married.

“We will be saving a substantial amount of money in terms of health benefits,” said Parlin, who is a public school teacher in nearby Newton.

As an undergraduate studying history and literature, Parlin said the gay and lesbian community on campus was an extremely supportive group of students.

“It was actually surprisingly active, there were a lot of students who were out, and a very thriving gay community,” said Parlin. “I think that in most parts of the country in the early ’80s, gay rights were really somewhat taboo and being gay was a much more invisible thing. But I never felt stigmatized, and I got a lot of support from my friends coming out.”

A member of the Harvard Glee Club up to the end of sophomore year, Parlin said that in the late ’80s, the Glee Club was an integral part of the gay student life on campus, with at least 15 gay members.

But Parlin was not personally involved in the gay marriage debate this year.

“I was actually very depressed by the level of hatred on behalf of the religious right, and I just couldn’t bring myself to go up to Beacon Hill,” he said. “It’s a very depressing thing to watch other people debate what rights you should have.”

Meanwhile, the Lowell House Masters, Diana Eck and Dorothy Austin, are also planning on filing for their marriage license within the next couple of weeks.

When they arrived at City Hall on Monday, they were the 268th couple in line, and decided that they didn’t need to file for it that night or even that week.

“It was wonderful to be down there at City Hall, and to see people together, talking about their relationships, and to see the kind of affection and outpouring of support from the crowd,” said Austin, lecturer at the Harvard Divinity School and associate minister at Memorial Church.

Austin, 60, met Eck, 58, professor of comparative religion and Indian studies, at an organ recital in Memorial Church, while they were both finishing up their graduate work.

They have served as Masters of Lowell House for the past six years, and say that their legal marriage will probably not affect their daily life.

“We’ve had a pretty stable day-to-day life for a long time,” Eck said. “We’ve owned two houses together, we’ve done all the things that people do during the day, like get up, get The New York Times, the Boston Globe, get breakfast in the dining hall...it will pretty much be the same.”

Eck said, however, that her marriage will grant many legal rights and lend a special religious significance to her partnership of 28 years.

“It certainly has legal dimensions to it that are very important, especially as you get older as you have things like property, illnesses, family—these are put at risk by not being able to be married,” Eck said.

The couple is currently planning a large ceremony for after their wedding, and will have friends and family coming from Mexico, England, Canada, India and the Palestinian territories.

They plan to marry on July 4, at Memorial Church.

“It will be a celebration of our constitution, our nation, the courts—it’s a wonderful day. And there will forever be fireworks on our anniversary,” Austin said.

“It’s certainly not going to look like a traditional wedding,” Eck said. “Everyone always asks what we’re planning on wearing, and to be honest we do not know yet.”

MARRIED IN THE PACK

At 1:45 a.m. on Monday morning, Paul J. McLoughlin II, assistant dean of Harvard College and first-year proctor in Pennypacker Hall, filed his intent to marry his partner Jason K. Schumaker, who is a financial aid officer at MIT. They were couple number 82 in the line at Cambridge City Hall.

The couple, who has been living together in Pennypacker since September, will get married on June 1—McLoughlin and Schumaker’s fifth anniversary. They met in 1999 in Burlington, Vt., where McLoughlin was finishing his graduate work in education and administration at the University of Vermont, and where Schumaker was vacationing.

McLoughlin said that they already had a large outdoors commitment ceremony last October 25, at Schumaker’s parents’ home on the Chesapeake Bay. Their legal marriage on June 1 will be performed by the city clerk of Cambridge, without guests present.

“Our real marriage, emotionally, in our minds, with our friends and family, was on October 25, this is just a legal thing,” McLoughlin said.

“So this is nice. So it gives it legitimacy—not to us—but to the outside world perhaps, and now we can get all the rights that other couples can in this state.”

McLoughlin said that the students in Pennypacker have been very supportive and are excited for their marriage.

“When they moved in in September, we were at the height of planning our wedding,” McLoughlin said. “And just this past week, at our last study break of the year, we all watched our wedding video.”

McLoughlin said that he is excited for the upcoming legal ceremony even if it won’t change his day-to-day life.

“I didn’t need this to marry Jason, because I already knew I wanted to spend the rest of my life with him,” McLoughlin said. “But it’s nice to have an institution behind us.”

McLoughlin, who sees the cause for gay marriage as “a civil rights struggle,” said that though a constitutional amendment may overturn the Supreme Judicial Court’s decision in favor of legalizing marriage for same-sex couples, he is not too concerned.

“I kind of doubt they will be able to rescind the marriages that have already taken place,” he said.

Another Harvard affiliate to get a marriage license, Robyn Ochs, was 11th in line at Brookline Town Hall Monday morning.

Ochs, who is now 45, has worked in the romance languages department for 21 years—“my entire adult life,” she said.

She met her partner of seven years, Peg Preble, through a mutual friend at a Boston University theater performance.

“It’s very exciting but it also feels a bit odd, because we’ve been together for seven years and we’ve been de facto married for five of those years,” she said. “It’s like we’re getting married but we’re already married. I feel the legal reality is catching up with our daily reality.”

Ochs said a number of her friends are also getting married in the next few weeks, and that many of them are long-term couples with grown children.

“We have four other weddings to attend this week. And these are all couples that have been married for up to 25 or 30 years,” she said.

Ochs herself has been very involved in the gay marriage debate in Massachusetts, and taught a class last semester at Tufts entitled “History, Community, Politics: Emergence of Sexual Minority Voices in the U.S.,” commonly known as “The Gay Agenda.”

“I have been down at the state house most of the days of the constitutional convention,” Ochs said. “I have called Romney’s office on a weekly basis, and been very vocal in my disgust.”

And though Ochs and her partner will be legally married this May, they will wait to celebrate their marriage with a large ceremony with over 150 people on September 4.

“I really wanted to get married in my own state. I was going to wait until it was legal here,” Ochs said.