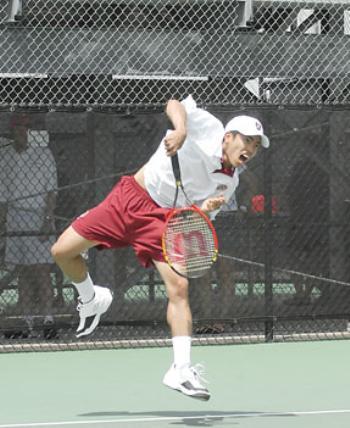 Co-captain Cliff Nguyen dropped a heartbreaking final match at No. 4 singles as the Crimson fell to No. 1 Illinois in the NCAA tournament Saturday. By Jessica E. Zbikowski
By Rebecca A. Seesel, Crimson Staff Writer

The No. 21 Crimson (19-7, 7-0 Ivy) bowed out of the NCAA Tournament on Saturday with a 4-3 loss to No. 1 and defending national champion Illinois, a defeat which could just as easily have gone to the Fighting Illini—and perhaps that was an surprise in itself.

Illinois (31-0, 13-0 Big Ten) had not lost in more than two years—62 matches entering Saturday’s contest—but Harvard stretched the Orange and Blue to the limit, pushing the final match to a final set.

That last match was a battle between Crimson co-captain Cliff Nguyen and Illinois’ Michael Calkins.

Nguyen had dropped the first set 6-3 and was down a break in the second, but he managed to force a tiebreak and took the second frame 7-6 (4).

With this comeback, the entire day’s contest began afresh. The overall score was knotted at 3-3, Nguyen’s at 1-1.

And so the co-captain’s third and final set would not only decide his match—it would decide what could be one of the greatest upsets in Harvard history.

But though Nguyen’s valiant fight gave his team the chance, the senior fell behind 3-0 in the final frame, and he could not make up the ground, falling 6-2 in his final match with the Crimson squad.

“[Calkins] is just a great player,” Fish said after the match, “and probably 10 out of 10 times, he’s a better player than Cliffy. But Cliffy did everything to beat him.”

Fish’s statement could have applied to his entire team, a squad which carried a 16-seed to Illinois’ top-seed. Harvard simply would not give in.

The squad dropped the doubles point with two 8-6 losses—one, that of sophomore Brandon Chiu and junior Jonathan Chu, against an Illini pair ranked No. 5 in the country. Then, in the singles competition, the Crimson promptly lost four of the six first sets.

“When we dropped those first sets,” said Chu, “it could have been a streamroller, but we refused to let it be.”

Senior Chris Chiou scored a quick 7-5, 6-2 victory, one which Fish called “a career match,” and the score was evened at 1-1.

The latter played a particularly impressive match against Illinois’ Phil Stolt, a senior who had won 11 of his last 12 completed matches and carried a No. 51 national ranking.

“I knew [Stolt],” Chu explained. “I’ve known him forever, and I just wanted to get on top of him early, take that first set, then take the match and run away with it, and hopefully start some momentum…and to let the rest of our teammates know, ‘Hey, we’re all fighting together, and we can be David and slay Goliath.’”

Lingman trailed 5-1 in the second set, but he staved off multiple match points and scrapped his way to 6-6.

And so it all came down to Nguyen. To a final match. To a third set.

“We never gave up,” he said, “and I’m sure we not only surprised ourselves, but we surprised everybody else in attendance with how tenaciously we came back…Not only did we come back and even it up, but we probably made the crowd feel like we were a better team for a couple parts of the match.”

“I think we really let the country know and the tennis community know that Harvard is one of the best teams in the country,” the senior said. “We came very close to beating an undefeated team.”

Illinois coach Craig Tiley was the first to admit it.

“I said yesterday to our team, and I’ve said all along to our team, that Harvard is very capable of beating us,” Tiley explained. “I think we got lucky today.”

The loss marked Harvard’s first in nine matches, and it capped a season which included an Ivy title and a ranking which has fluttered between No. 22 and No. 12 for the past four months.

The squad will lose five seniors—Lingman, Riddell, Chiou, Nguyen, and George Turner—each of whom has been integral to this season’s success.

The Crimson leaves Tulsa disappointed, itching to continue tournament play—but the players will also leave knowing that they came this close to knocking off the top team in the country, to ending a winning streak two years in the making and to having a crack at the Elite Eight, an honor Harvard has had only once before.

“I’m really proud of everybody,” Chu said, “from the practice guys at home to everybody who fought their hearts out today.