TEAM OF THE YEAR: Harvard Heavies Rout All Comers 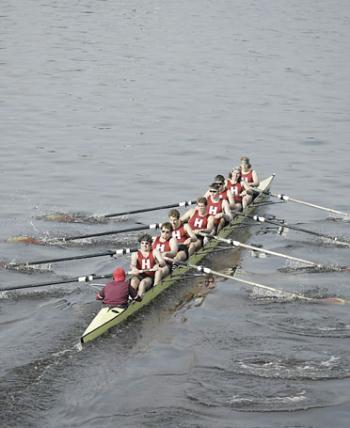 By the end, opposing crews must have been wondering why they even bothered to show up. After all, they sure as hell weren’t coming away with a victory.

After two years without a loss, the Harvard men’s heavyweight crew was simply that good.

Good enough to win every race by open water. Good enough to match the previous year’s varsity eight at every turn. Good enough to assume its place on the walls of Newell Boathouse, beside the legendary Crimson dynasties of the late ’60s, mid ’70s and late ’80s.

“It’s neat to think we could possibly stack up against those guys we’ve idolized our whole Harvard careers, the ones whose pictures we have on our walls,” said senior eight-seat Kip McDaniel reflecting on his boat’s second consecutive Intercollegiate Rowing Association (IRA) national championship. “It’s nice to think that one day maybe we’ll have our pictures up on that wall, too.”

As if there were any doubt.

Every regatta, the story unfolded in exactly the same way. The Crimson surrendered a seat or two at the start, walked back through its opponent by the 500-meter mark, and then pulled away for a lopsided victory.

There was never any rush, no need to sprint or become too excited, no reason to abandon the low cadence and smooth strokes that powered 24 straight dual victories.

“We’re not flashy,” McDaniel said. “We don’t have a fast start, and we don’t know about our sprint. We just row a really long stroke and power right through it.”

Princeton came as close as any would in the first regatta of the year, losing by just 1.6 seconds.

No one would be anywhere near as close again as dual wins, already not excessively difficult to come by, became laughably inevitable in the face of Harvard’s overwhelming talent.

Margins of victory against top-10 opponents swelled, first to 8.5 seconds against Navy, then 13.8 against Northeastern in the annual “Battle for the Charles,” which in the end more resembled a historical footnote than any meaningful engagement.

“There’s always a feeling that what we’ve done so far is what was expected,” said senior four-seat Jonathan Lehe. “We had every reason to believe we could duplicate what we had last year, and that became the bar that we had to get over.”

For such a high standard, Harvard’s first varsity had remarkably little difficulty measuring up.

At the Eastern Association of Rowing Colleges (EARC) Sprints—won just once by Harvard in the last 13 years—the Crimson coasted to victory in the first varsity after sweeping the other major heavyweight divisions.

“For us to go to Eastern Sprints and show off our dominance made it more of an exhibition race than a competitive race,” said senior Justin Webb, seven seat on the second varsity. “We’ve been looking forward to this race for weeks just to show off what we could do.”

That series of races and the subsequent win of the Ten Eyck Trophy at IRA nationals spoke directly to the depth of Harvard’s program, its senior class in particular.

The highly-touted recruiting class of 2000—which currently calls six members of both the first and second varsities its own—arrived in Cambridge brimming with potential, replete with several Unites States junior national team members and other already seasoned racing veterans.

National championships weren’t expected—traditionally, the Crimson skipped the IRA championship regatta to train for the season-ending Harvard-Yale dual—but just about everything else was.

And, as they had last year, and each of the two before that, when it came time, the group cemented by the class of 2000 came through, this time just as everyone expected them to.

“Last year was a surprise,” McDaniel said. “This year it was expected and everyone was gunning for us. We had a big bull’s eye on our back and I think we pulled it off even more impressively than last year.”

In a grand final featuring five of the nation’s top six crews, the Crimson held true to the race strategy that had undercut so many upset bids, while the opposition quintet defensively attempted to forestall the inevitable.

No. 2 Washington and No. 4 California attempted to break from the pack off the start, with only the Golden Bears succeeding in picking up a pair of seats.

Harvard would reclaim them 700 meters in, as always. Just as predictably, the Crimson would be ahead by a full length 400 meters later, and possess an open-water lead not long thereafter.

“It felt like it was scripted,” Lehe said. “We know if we don’t let anybody jump us by more than a seat or two off the start we can pull it back. We know we’ve got more base speed in the middle than anyone else.”

And in the end, that was what separated the 2004 national champions from their 2003 counterparts. Each time on the water, they knew they’d win. And so did everyone else.