Clothing retailer to be replaced by the Square's fourth major bank 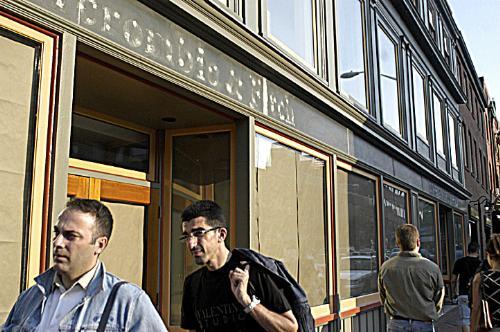 The outlines of the now-removed Abercrombie & Fitch are still visible over the paper-covered storefront ni the middle of Harvard Square. Citizen's Bank will replace the clothing retailer.
By Joshua P. Rogers, Crimson Staff Writer

Fashionistas may forever debate whether Abercrombie & Fitch apparel is still in vogue, but one thing is certain this week—it’s out of the Square.

The store, which targets “18-to-college”-age shoppers, will be replaced by Citizen’s Bank, which is vacating its location on Mass. Ave. for Abercrombie’s larger quarters on John F. Kennedy Street.

Abercrombie withdrew from the highly fickle Harvard Square market because it failed to turn a profit, according to John DiGiovanni, a Square real estate maven whose company owns the Garage.

“Abercrombie leaving is another example of the consumer deciding what they want,” DiGiovanni said. “Abercrombie wouldn’t leave if it was a profitable store.”

Joseph L. Williams, who works at Nini’s Corner across the street from the 6 JFK St. location, said that most of the people he saw entering the store were not the brand’s target college students, but high school and middle school students instead.

“College students spend their time studying and don’t care as much how they look,” Rosa M. Alvarez said.

But Williams believes a failure to reach the target audience might not have been the only reason the store left, as he observed that the store was constantly busy from his post across the street.

Williams said he heard rumors of heavy shoplifting prior to the closing.

“People have wiped stuff off the shelves, stolen clothes a number of times, that could be the reason they closed,” Williams said.

Abercrombie & Fitch representatives could not be reached for comment.

Chains the size of Abercrombie & Fitch have had limited success in the Square, DiGiovanni said. The Limited, HMV and Pacific Sunwear have all gone out of business, while one notable exception—the Gap—has survived for 25 years.

Citizen’s Bank, rather than another retailer, will replace the departing Abercrombie. Citizen’s already operates a location in Harvard Square on Mass. Ave., which will move as soon as remodelling is complete, Citizen’s Bank spokesperson Melodie L. Jackson said.

“All the employees are being relocated and it will be the same Harvard Square employees with some additional teams at the new location,” Jackson said.

Jackson said that the branch is moving in order to expand service to its customers as well as to transform the branch into a “community hub.” She said ATMs should be operational by early September and that the bank hopes other services will be available by late fall.

“The branch will have a community room for community groups to hold meetings and it will be a much more expanded space to provide greater convenience for our customers,” Jackson said.

But Williams and DiGiovanni said that the prominent storefront is wasted on another large bank branch opening in the square. Fleet, Cambridge Savings Bank and Cambridge Trust already have large branches open on the corner of JFK St. and Mass. Ave.

“It probably would do better as a retail store because it’s a pretty good location,” Williams said.

—Staff writer Joshua P. Rogers can be reached at jprogers@fas.harvard.edu.