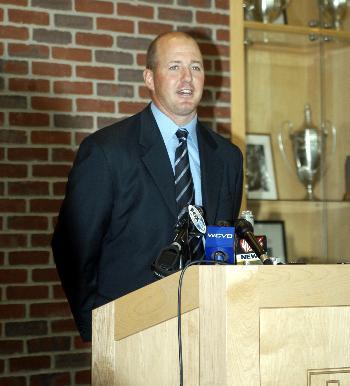 Ted Donato ’91 has no coaching experience, but will have a strong network of alumni—including Harvard legend Bill Cleary ’56—to rely on.
By Timothy J. Mcginn, Crimson Staff Writer

It has been 13 years since Ted Donato ’91 worked in Harvard athletics’ laundry facilities, but as of last Friday at least one thing is for sure.

He’s getting a promotion.

“Ted Donato’s credibility and reputation in the hockey community is outstanding and needs little comment,” Scalise said. “He is known for his enthusiastic team play, as someone who brings out the best in others, and as a developer of people. He is also the personification of Harvard’s academic and athletic philosophy.”

“He has been a loyal supporter of our program since he graduated, and with a program that has had only five head hockey coaches in the last 54 years loyalty is something that we take very seriously,” he added.

The announcement also marks the end of Donato’s 13-year journey through the National Hockey League (NHL). After serving on the United States Olympic Team in 1992, Donato signed with the Boston Bruins, with whom he spent eight seasons.

Four years and several teams later, he returned to the Bruins for the 2003-04 season, officially ending his relationship with the team when he became an unrestricted free agent at midnight on July 1. Despite the formal parting, several members of the organization, including coach—and former Boston University opponent—Mike Sullivan, were present to offer their congratulations.

Though he conceded that the itch to don skates hasn’t yet left him, Donato dismissed the suggestion that the possibility of an upcoming NHL work stoppage influenced his decision.

“To be honest with you, I always had [this position] in the back of my mind,” Donato said, noting that he might have returned to the NHL had he not been offered the position. “With me kind of at the twilight of my career and the position being open, in a lot of ways, the stars aligned very much for me and I’m very fortunate to be standing where I am.”

Addressing the media in a conference room dotted with his former teammates, future proteges and a number of Harvard legends, Donato tried in vain to maintain his composure, but was admittedly briefly overcome by a surge of emotion as he spoke for the first time in his new capacity.

“I don’t want to get carried on too long here, probably because I’m too nervous,” Donato said, letting down his guard just long enough to crack a smile. “I think there’s one thing that I wanted to say and that was, very simply, that I think that Harvard hockey is the greatest combination of superior academics and competitive athletics in all of college sports. And that is a tradition that I embrace and hope to carry on.”

The Crimson hockey legacy so often touched upon during Donato’s introduction is one with which he is already intimately acquainted.

Donato, who earned four varsity letters in addition to serving as team captain his senior year, tallied two goals in the 1989 NCAA title game, propelling Harvard to its only national championship. He was subsequently awarded the tournament’s Most Valuable Player honors.

“He’s won with Harvard,” captain Noah Welch said. “So when he walks into the locker room he’s going to expect to beat the BCs and the BUs, and I expect it to rub off on our team.”

But, accolades aside, the Dedham, Mass., native brings with him not only the perspective of a former Harvard student and hockey player, but also a level of affability and comfort with New England that former coach Mark Mazzoleni’s detractors claim he never had.

Unlike Mazzoleni, a Michigan State alum whose coaching experience was limited to Midwestern schools, many of the candidates seeking to replace him had spent time in Cambridge as players, assistants or both.

But, unlike Donato, each of those Crimson-affiliated candidates has experience coaching at the college level, with Union head coach Leaman and Maine’s former interim head coach Reilly highlighting the list.

“I think it’ll definitely be a challenge,” Donato said. “I wouldn’t dare underscore the fact that I don’t have previous coaching experience.”

Donato admitted that he has some catching up to do before the season starts, but also made it quite clear that he knows exactly what he is getting into.

Before accepting Harvard’s offer, Donato spoke with friend and Bruins teammate Dave Poulin, who similarly returned to his alma mater, Notre Dame, from the NHL as head coach despite having no prior experience behind the bench. Poulin has had just one winning season since taking over the Fighting Irish in 1995.

And while the defending ECAC champion squad he inherits is far stronger than the sub-.500 club Poulin took on—making a similarly poor start very unlikely—Donato will have at least one prominent alum to turn to for advice: his former coach, Bill Cleary ’56.

“I absolutely look forward to him terrorizing me on certain days,” Donato said.

Irrespective of his direct level of involvement, Cleary’s handiwork figures to be noticeable in his student’s product. Donato expressed the highest respect for his coach as both a strategist and mentor yesterday and said he’d be a “fool” not to pick Cleary’s brain to improve his own coaching.

While Donato has undoubtedly internalized Cleary’s Olympic style, whether he possesses Cleary’s knack for imparting the game is as yet unclear. According to Welch, though, the question is almost irrelevant.

“I know the big knock is that he’s never coached before,” Welch said. “But, worst case scenario is he can’t communicate that well, so we’ll have him throw his equipment on and just go out and skate. Then we’ll take notes.”