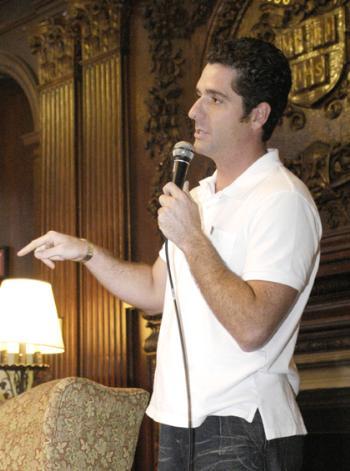 Speaking for over an hour in a deep, friendly baritone, Heinz addressed topics ranging from foreign policy to his own much-noted resemblance to John F. Kennedy, Jr. The event, which was held in the Kirkland Junior Common Room, was co-sponsored by the Harvard College Democrats and Students for Kerry.

Despite some Democrats’ fears that Kerry’s campaign has lost momentum, Heinz, who joined the campaign trail from a private equity firm in New York, remained optimistic, if vague.

“We have the opportunity to break this thing open in the last few days,” he said, adding “John is someone who will do better in a voting booth than in a poll or on the phone.”

When the subject turned to President Bush, Heinz occasionally shook his head.

“Events on the ground in Iraq have gotten worse. In terms of [people killed in action], this was the bloodiest month since we’ve been there,” he said.

While he kept his frustration in check with a dose of humor, there was no question that Heinz’s emotions ran high.

“This is about humiliating [Bush] and making him leave with his tail between his legs,” he said earning the loudest applause of the night.

Dressed casually in a white polo shirt and jeans, Heinz rarely hesitated in his responses, entertaining the crowd with his casual style and articulate advocacy of his stepfather.

He spoke reverently of Kerry, describing him as a man of “respect, friendship and love.”

“There isn’t a biased bone in John Kerry’s body,” he said at one point, adding later that “John is completely incapable of actually telling a lie.”

Bush, in contrast, was “not listening, not respecting and doing what he wants,” he said.

Heinz admitted that he is a 1995 graduate of Yale, drawing disapproving groans. He added he was wait-listed at Harvard.

But Heinz—who has an MBA from Harvard Business School—was for the most part warmly received by the audience, none of whom appeared to disagree with his attacks against Bush.

Maya E. Frommer ’07, who gained some national recognition over the summer with her “John Edwards Is Hot” T-shirts, looked thrilled to have her picture taken with the potential First Stepson. But Frommer has yet to make a “Chris Heinz Is Hot” shirt.

“So many people suggested I make one,” Frommer laughed. “I was going to make one to wear today. But Cate Edwards thinks I’m a creep after the Edwards one,” referring to the vice-presidential candidate’s daughter, a recent Princeton graduate.