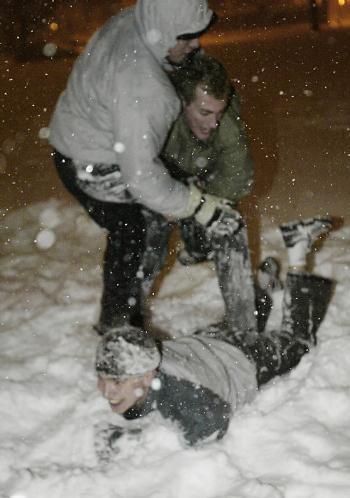 From top to bottom, Timur Akazhanov ’05, Christopher T. Looby ’05 and Kirill A. Babikov ’05 wrestle in the MAC courtyard as 30 inches of snowfall blanketed the northeast this weekend.
By Katharine A. Kaplan, Crimson Staff Writer

A blizzard dumped two feet of snow on Cambridge Saturday night and yesterday, but final exams will continue as scheduled today.

Dean of the College Benedict H. Gross ’71 wrote in an e-mail to The Crimson yesterday that the college will run exams as planned, “filling in for the proctors if necessary.” The college also announced that exams would continue on its website.

Many students had their plans to leave for intersession interrupted as Logan Airport closed until 11 a.m., and several airlines cancelled and delayed flights into the afternoon.

The snow and ice-covered roads along with Massachusetts Bay Transit Authority services delays and cancellations made it difficult for many dining hall workers to get to work yesterday morning, resulting in closures in some houses.

Campus shuttle service continued with two rather than four buses, but with slight route detours. Service to the Quad was as normal while the Mather/Peabody Terrace route was diverted to Leverett House due to unplowed roads.

Kirkland Dining Hall was closed for lunch yesterday, and Cabot serving area was also shuttered. Cabot allowed students through the kitchen it shares with Pforzheimer to get food in the adjourning dining hall.

Mather and Dunster residents used plastic dishes and cutlery to minimize the need for washing dishes.

Some dining hall workers in Pforzheimer-Cabot kitchen slept on couches Saturday night or paid for taxis out of pocket to ensure that they would be available to serve students yesterday.

The snow caused intermittent closings of stores across Cambridge as well, with Tommy’s House of Pizza staying dark, and Starbucks and Dunkin Donuts closing early.

Hurricane-force winds blew snow through crevices in window and door frames and into entryways and dorm rooms.

The National Weather Service estimated that the snowstorm may rank in the top ten recorded in southern New England history, the Boston Globe reported.

The snowstorm prompted Gov. Massachusetts Governor Mitt Romney to declare a state of emergency and activate the National Guard to help with rescues and evacuations.

—Staff writer Katharine A. Kaplan can be reached at kkaplan@fas.harvard.edu.