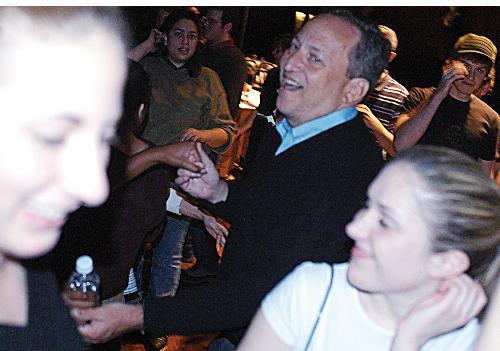 Larry Summers is a busy man, but he took a little time to get busy with the freshmen last night at the annual Freshman Study Break in Annenberg Dining Hall.

After working the crowd of about 400 first-years for an hour, Summers busted out his moves on the dance floor, flailing his arms and gyrating his hips to the tune of Beyoncé.

“I came here with the goal of dancing with Larry Summers, and I did it,” Chinwe U. Nwosu ’08 said. “He’s a great dancer.”

“Now I can say that ‘Bootylicious’ is our song,” she added.

Summers’ dance moves first made waves in January 2003 when he be-bopped to Nelly’s “Hot in Herre.”

And Summers heated up the dance floor once again this year, particularly with the ladies.

But the gentlemen weren’t so lucky.

Silas P. Howland ’08 made an unsuccessful proposition to the former secretary of the treasury.

“President Summers, you’re an economist,” Howland said. “Somebody said they’d give me $60 if I danced with you. Is that a good decision?”

“I don’t think so,” Summers retorted, patting Howland on the back before edging away.

Some first-years, however, were not so fond of Summers’ swing.

“He sort of undulated in place,” he added.

In the spirit of economic assessment, one freshman gave him numerical ratings on his dancing style.

Others were more forgiving.

“He’s not a great dancer, but he was a Cabinet member, so he doesn’t need to be,” said Rebecca Brocato ’08.

Summers may be among the jet-set crowd in Washington and Cambridge, but he’s still a little rough around the edges when it comes to partying.

Dressed casually in slacks and a black sweater, Summers munched on a holiday cookie, causing several students to notice the crumbs cascading down the front of his shirt.

Summers also ate nachos and cheese, with a side of his staple drink, Diet Coke.

In an interview yesterday, Summers said that he goes to great lengths in order to make a good impression on the freshmen.

“I prepare for this event each year,” he said, noting that his three kids help keep him in touch with the younger crowd.

But Summers confessed that there are still some gaps in his education.

“I have never heard of the Bee Gees,” he said after “Stayin’ Alive” played. “Is that bad?”

He also scoffed at the freshmen for their timidity on the floor.

“The Class of 2007 was much more enthusiastic about dancing than you guys,” Summers said in his address to the crowd early in the evening.

Summers even took some time off the dance floor to sign dollar bills for several freshmen.

Nwosu deemed the event a complete success, highlighting her dance with the University president.

“It was the most fun I’ve ever had on a Thursday night,” she said. “And it’s much better than writing papers.”

—Staff writer Lauren A. E. Schuker can be reached at schuker@fas.harvard.edu.