From Sharecroppers’ Son To College’s Gatekeeper 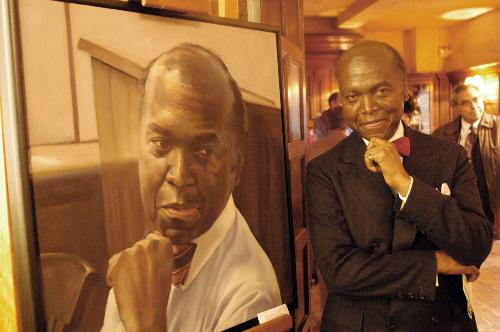 Senior Admissions Officer David L. Evans attended his portrait unveiling at the Fogg Art Museum’s Naumburg Room last May. The event was sponsored by the Harvard Foundation, where he is a member of the Board of Directors.
By Matthew S. Blumenthal, Crimson Staff Writer

As he stood in the Naumberg room of the Fogg Art Museum this May, next to a portrait of his likeness that now graces the walls of Harvard University, Senior Admissions Officer David L. Evans seemed a long way from his childhood home.

The son of two sharecroppers who had six years of education between them, Evans was orphaned by the age of 16. But his parents’ untimely deaths did not prevent them from inspiring their seven children with a message that would send them on paths to great success.

For more than 35 years, Evans has filled a wide range of roles at Harvard—from his primary job in admissions to a number of administrative and advisory positions for freshman to leadership in the minority community.

As an admissions officer for a diverse set of regions, he has helped to select 36 Harvard classes.

He has been an advisor to the Harvard Foundation for Intercultural and Race Relations since its creation in 1981.

He has been extremely active in the minority and service communities at Harvard. As a distinguished African-American on campus, he has provided sanctuary for students whose ethnicity may have made Harvard seem quite intimidating.

And finally, and perhaps most importantly, Evans has been a leader and an essential voice, through recruitment, vision, and personal attention, in the dramatic increase in minority enrollment and matriculation at Harvard. During his tenure, more than 15 times the number of African-American students have matriculated than had in the previous 334 years of Harvard’s history.

“My parents believed that there were two sources of magic in the world: religion and education,” Evans says. “I haven’t really practiced the first one but I think that I have the second.”

Evans has been honored twice over the last few years for his achievements: with the Faculty of Arts and Sciences’ top prize for Administrative Service in 2002, and with the unveiling of his portrait in the Fogg Museum in May.

The fourth of seven children, all of whom went to college, Evans credits the supportive nature of his family relationship with putting him on the road to academic fulfillment.

“My older siblings helped me, and I helped my younger siblings. My parents inspired more than helped,” he said.

His sister Darnetta Clinkscale, who heads the medical department of Barnes Jewish Hospital in St. Louis, says that although their family “was one of material scarcity, it was one with a lot of love.”

A native of Phillips County, Ark., Evans says the process often was not easy, but those problems did not prevent him from achieving academic success, both in high school and at Tennessee State University and Princeton University, where he studied electrical engineering.

Evans says that he came to Tennessee State as an undergraduate with a “well-directed mind.”

“I could not afford to be an English major or to dabble,” he says. “I focused on academics, in particular on engineering, to lessen the burden on my family.”

Even after completing his studies, Evans’ parents’ educational message continued to drive him.

When working in Huntsville, Ala. on the 1969 moon landing, Evans says he saw young African-American adults being “swallowed up” by the new integration.

He says that he saw then that he could do something to help—he started a one-man, unpaid recruiting and placement service for young African-American students, helping many gain admittance to the most prestigious colleges in the United States.

“I had learned from my siblings that there are some very deserving people that would perish without some help from someone who is a little farther along,” Evans says. “There are so many out there even today who are near the edge, and all they need is a helping hand.”

Evans’ work quickly gained him media attention and job offers from the College Entrance Examination Board, Harvard College, and MIT.

While working in Huntsville, Evans caught the attention of the local Ku Klux Klan, which put him under surveillance.

“I knew that they were watching me,” he says. “But I knew just to ignore it and do the best work that I could.”

Impressed by Harvard College and Case N. Peterson ’52, its dean of admissions, Evans accepted a job with the admissions office in 1970 during a two-year leave-of-absence from his engineering work.

Evans makes it quite clear that he never expected then that he would spend the next 35 years working in Harvard admissions.

“I met my wife after three weeks. Of course I didn’t know then that she would be my wife, but that’s why two years of absence turned into 35 [full] years, and my participation in the selection of 36 classes,” he says.

Evans arrives at Byerly Hall promptly at 9 a.m., seven days a week, and seldom leaves before six o’clock in the evening—and during the busy season, he often stays much later reading applications. Dean of Admissions William R. Fitzsimmons ’67 calls him “tireless,” but Evans is more modest.

“You sort of have to do it, otherwise all the work will never get done,” he says.

He used to take the applications home with him, but decided to do all his reading in his office to make sure he does not lose any.

Upon reaching his office each morning, he checks his inbox, his e-mail, and his voicemail; orders the communications in order of difficulty and urgency; and responds to them accordingly.

His day revolves around reading applications and meetings with staff members and Fitzsimmons.

Evans regularly contacts the Harvard Foundation, on whose board he sits, to see how he can help, and he says he tries to have lunch with a representative of some campus organization each day.

After lunch, he walks for three to five miles, usually around Harvard Yard, and is regularly seen walking as far as to Fresh Pond. He used to jog, but found it was “hard on the ankles and such.”

He also helps organize Black Alumni Weekend, an annual celebration sponsored by the Office of the President and the Black Students Association.

Fitzsimmons lauds Evans in particular for his informative and engaging information sessions.

“He is very funny, but imparts huge amounts of information at the same time,” Fitzsimmons says.

“I like to put on a little English spin, some Southern charm—I guess people like it,” Evans says.

BEYOND THE JOB DESCRIPTION

Evans was honored in May at a ceremony in which his portrait was unveiled as part of the Harvard Foundation Minority Portraiture Project. His portrait hangs in the Fogg.

Evans was honored both for his admissions work and for his activism on behalf of minority groups on and off campus.

Evans has also branched out into the University community by working as a proctor in Harvard Yard, an advisor to first-year students, and an assistant dean of freshman.

“He works 16 hours a day, but at the same time, feels responsibility to make sure that students from wider backgrounds gain the same chances as others,” Fitzsimmons says. “He also feels the double burden that many other minority faculty feel, in that they must be mentors and serve on committees.”

Evans impressed several of his Mower proctees, including Martha Newton ’79 and Raymond J. McGuire ’79, so much that in October 2003, they created a scholarship in his name—the David L. Evans Scholarship Fund.

“The lesson, I guess,” Evans says, “Is that you never know the influence you have—I had no idea that I had impressed those kids so much.”

Evans recalls the shock with which he greeted the news of the Fund’s creation.

“I thought one had to be dead or retired” to be honored with a scholarship, he jokes.

“I remember saying to someone, ‘Do the doctors know something that I don’t?’”

Although he has received high honors before—in 2002 he received Faculty of Arts and Sciences’ Administrative Prize, the most prestigious award an administrator can receive—Evans described the portrait unveiling as an unprecedented honor and experience.

“For me, as a member of the first generation of my family to graduate from high school, this is truly a surreal experience,” he says. “I’ll probably wake up and appreciate it in days and weeks to come, but right now I don’t know how exactly how to deal with it yet.”

His sister says he fully deserves the accolade.

“He is so giving and so concerned about others,” Clinkscale says.

“Most of his waking hours are spent thinking about how he can help others achieve their maximum potential; he is constantly giving back.”

—Staff writer Matthew S. Blumenthal can be reached at mblument@fas.harvard.edu.