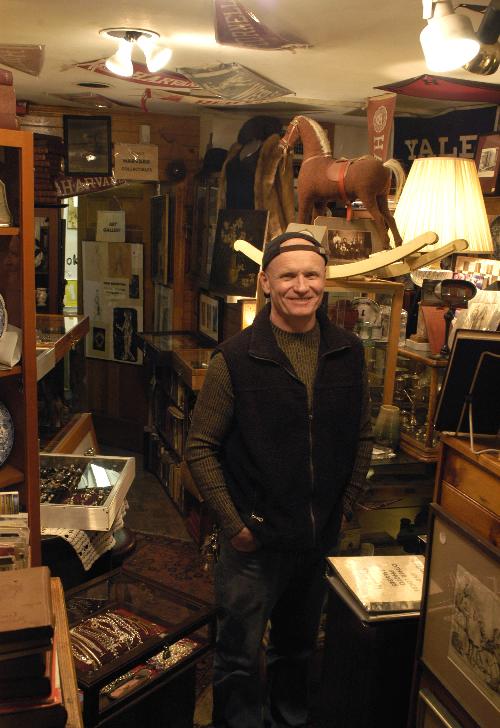 In a dark Arrow Steet room adorned with an antique lamp and fraying tassels, certain dreams came true, according to police reports.

Female masseuses massaged male customers’ genitals and offered—for a little bit of cash—extras like the “Russian Ending” and “Pop the Cork” at About Hair, according to the Cambridge Police Department (CPD).

Police arrested the shop’s owner, Duncan W. Purdy, on Oct. 7, and seized $1,608, a digital camera Purdy has used to shoot nude photos, and a computer.

Purdy, 52, calls the alleged transactions a “misinterpretation,” and said that the large amount of cash present came from art sales earlier that day.

“This is not something I was directly involved with,” he said Friday, after his lawyer told him not to comment to the media about the specifics of the case.

If the Cambridge District Court rules that Purdy knowingly permitted About Hair to harbor prostitution and that he took in such earnings, he could face up to five years in state prison and $5,000 in fines for each of four separate counts, with no chance of probation or a reduced or suspended sentence for two years, as called for in Massachusetts state law.

A STORE OF MANY TRADES

Since buying the 1 Arrow Street storefront in 1990, Purdy has expanded the hair shop, subdividing the small space into an art gallery—featuring his own paintings and nude art photos—and an antique shop specializing in leather-bound books and Harvard paraphernalia. Though Purdy offers four different business cards, all transactions go through one cash register, and locals know the place as About Hair.

On Friday, a week after the arrest, Purdy brushed highlights onto the slick blond locks of a 58-year-old woman, brightening up her shading. She is one of many who drop by his shop to rifle through new books or chat with the man they have come to call “Dun-CAN.”

In the hair salon’s cramped quarters, a sign on the mirror reads: “Ask / About Our / STRESS RELIEVING / One Hour / SHIATSU and SWEDISH / Massage!”

Purdy said he began to offer massage in 1996, when a hairdresser named Danny asked if he could offer scalp massages at a sister business on Church Street.

Soon after, Purdy was studying books on the subject and training his employees in the skill—sometimes hiring students and other females just for the job. He built walls around a massage bed in the back of his shop and furnished it with towels, a low-lit lamp, and a small mirror angled just so above the bed. With fraying tassels and a lacy black shawl hanging from the ceiling, the room is more evocative of a Victorian boudoir than a therapeutic massage parlor.

On a Thursday night in late September, at 7:01 p.m., Det. Louis Cherubino Jr., undercover, walked into About Hair. According to a CPD report filed a week later, Cherubino told Purdy that he was in a hurry.

The report continues: “Purdy stated, ‘you want the 15-minute then for $60.00.’ Purdy then asked Detective Cherubino if he desired any ‘extras’ and referred to topless for $25.00 additional or nude for $50.00 additional.”

Purdy then took Cherubino to the massage room and introduced him to a woman called Lydia, the report stated. Cherubino paid Purdy three tracked $20 bills, and followed Lydia into the room, which was “illuminated by a lone red light bulb,” according to the report.

As she massaged the police officer’s chest and stomach, she said she had previously done “in calls” and “out calls”—which the CPD report identifies as street terms for prostitution. She then “began to brush Detective Cherubino’s genitals with her fingers and proceeded to manipulate his penis” before the timer rang, the report states.

CPD then called in a detective from the Somerville Police Department.

Two weeks later, Det. James Hyde met “Vanessa,” who entered the room topless and followed a similar routine, according to a police report.

With two outstanding warrants, Cambridge police entered the shop on Oct. 7 as Purdy showed two customers paintings in the adjoining art gallery, Purdy said. Six other people were in the store, including one male massage customer and two female masseuses, a CPD arrest report states. None were arrested, and Pasquarello said that he doesn’t know if they or any others will be booked for deriving income from prostitution. While prostitution arrests are routine in Cambridge, Pasquarello said, those for maintaining a house of prostitution are rarer.

On Friday, Purdy denied that he offered such extras.

Since the arrest, Purdy said he has stopped offering massages and hasn’t asked his two masseuses to return to work.

“I just feel that it would give the wrong impression,” he said.

Purdy is out on bail and will face a pre-trial hearing on Nov. 11. According to the Cambridge District Court criminal docket, Purdy was acquitted last year by a jury of six on a charge of indecent assault and battery stemming from a conflict between Purdy and an employee, he said. If Purdy is convicted of any charges, the 2004 charge will not affect his sentence, according to the Middlesex district attorney’s office.

“I’m a single father. I have two children. This is my only source of income,” he said. “I’ve been here for 20 years, and I’m going to stay for as long as I can.”