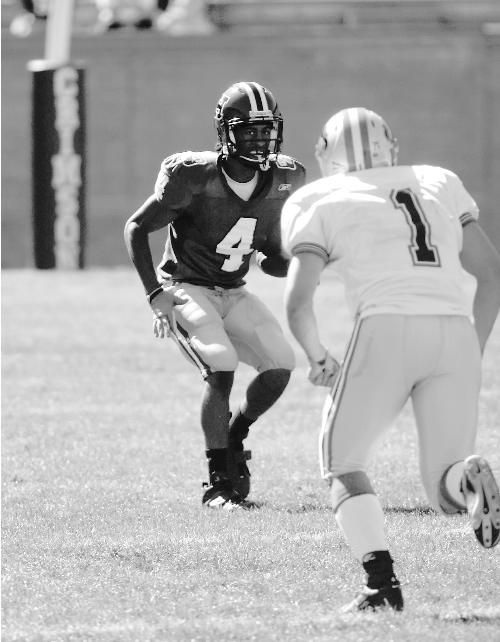 Freshman cornerback Andrew Berry will be facing his brother, Adam, who plays wide receiver for Princeton. The two will meet this Saturday.
By Malcom A. Glenn, Contributing Writer

It could have been the best of both worlds.

One Berry would throw the ball, the other would catch it, and a legion of Harvard football fans would fall in love with the level-headed twins from Bel Air, Md.

This situation almost became a reality, but while rookie wide receiver Adam Berry chose the Crimson’s Saturday’s opponent, Princeton, and his twin brother, freshman cornerback Andrew Berry, decided to come to Harvard, the Crimson is more than happy with its Berry—even if he hasn’t landed exactly where originally expected.

“I played quarterback in high school, but it’s one of those positions where there’s just too much to learn unless you have game experience,” Andrew said.

“We recruited him as a quarterback but we let him know right on the spot that if there was a chance to get him on the field faster, we would do that,” Harvard coach Tim Murphy said. “We thought he was a really good athlete but he’s exceeded out expectations.”

The move to cornerback meant that the Berry brothers could potentially face off—literally—in only the sixth game of their respective college careers. And although Adam might not make it on the field this Saturday, it’s still a scenario Andrew has thought about.

“The first thought that would cross my mind would be how weird these circumstances were,” he said. “Throughout high school, I’m just used to seeing a cornerback in man-coverage against Adam and knowing exactly where to go with the football.”

Andrew is already in a different mindset with regards to his teammate-turned-rival, adding, “I always thought my brother could beat any corner that was put up against him, but now, me being that corner, I’m in a totally different mentality.”

It almost turned out that the Berrys would be together in the same stadium for their college years—Princeton Stadium, that is.

“It was interesting, we recruited them both, and both kids came to our camps,” Murphy said. “We really hit it off, but to be honest, right up to the last minute, I thought they were both going to Princeton.”

Andrew disagrees, saying that although he did consider becoming a Tiger, Harvard was where he could see himself having the most success.

“It ended up coming down to Stanford, Harvard, and Princeton, and in the end, Harvard was just the best fit for me,” he said. “I’d always had great experiences during the recruiting process, and I loved my visit here, so I knew this would be the place for me.”

Good thing for Crimson fans, too, as Andrew has cemented himself as a starter at a position he’s never played extensively.

“This is my first extended time playing corner,” he said. “I played it a little bit back in high school if the other team had a really athletic receiver, but even then, I’d just play man-coverage and just run around and keep up with them.”

You wouldn’t be able to tell after what has transpired this season.

After senior Gary Sonkur went down with a preseason hamstring tear, modest and inexperienced Andrew didn’t believe it would mean anything significant for him.

“At that point it never crossed my mind that I’d be starting, because I still had some guys ahead of me,” he said. “But after the diagnosis, when we found out that it was a tear instead of a pull, I was just hoping that I’d be able to travel during the next couple of weeks and maybe get a little bit of playing time.”

A little bit became not just a starting job at corner, but also a number of reps on special teams thanks to Andrew’s athleticism—which he shares with Adam, who also played baseball and ran track in high school.

Still, while they looked at many of the same schools, it’s no surprise that they didn’t end up at the same place.

“Even though we’re twins, we’re two different people, and so for whatever reason Princeton was the better fit for him,” Andrew said.

Murphy isn’t underestimating how close he believes the Crimson came to becoming Berry-less.

“I remember Andrew called my house three times the Sunday before national signing day and each conversation got longer, but I still thought he was going to Princeton,” Murphy said. “They’re both good athletes. Whether or not we got the better one, only time will tell.”

That time will probably have to wait until after next week, as Adam has struggled for playing time in a Princeton receiving rotation featuring some of the Ivy League’s fastest wideouts. Still, Andrew is eagerly awaiting the day the brothers do eventually step on the field at the same time against each other.

“We’re both so competitive against each other, whether it’s football, basketball, or even just monopoly, so it would be a great battle throughout the entire game,” Andrew said. “But I wouldn’t let him score.”