Balkema Dominates on D; Berry Sits Out With Shoulder Injury 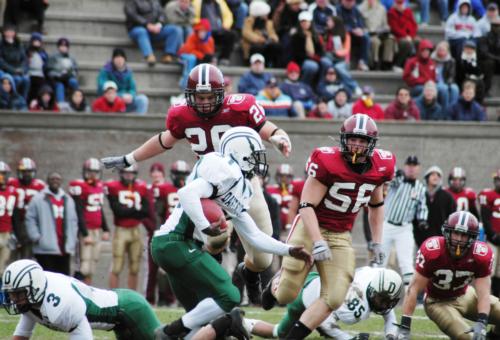 While the most striking number from Harvard’s whipping of Dartmouth on Saturday was the 42 points that the Crimson put up on the Big Green defense, an equally notable figure was 13—the number of tackles for senior linebacker Robert Balkema.

Balkema paced the Harvard defense all day. Five of those 13 tackles were for a loss, including three sacks.

“A lot of it was just the scheme,” Balkema said. “We were sending more guys than they could block...A lot of times I was just free. The D-line just controlled the line of scrimmage.”

Balkema broke into the starting lineup earlier this season after junior Danny Tanner went down with an injury, and played so well that even when Tanner recovered, Balkema kept his starting job.

The senior led a defensive effort that held the Big Green to 215 yards of total offense. The Crimson’s front seven controlled the line of scrimmage all day—continually putting pressure on Dartmouth quarterback Josh Cohen and limiting the Big Green to only 32 yards on the ground.

Freshman cornerback Andrew Berry missed his second game of the year due to a shoulder injury that continues to plague him.

Berry, who played quarterback in high school, stepped right into the starting lineup at the beginning of the season after senior Gary Sonkur went down with a hamstring pull.

Opposing offenses have targeted Berry all year as opposed to going after the more experienced Keith Howell on the other side of the field. The freshman has managed to hold his own and has consistently avoided getting burned on big plays.

“It’s a very common freshman injury,” Murphy said of Berry’s shoulder ailment. “It’s probably why freshmen shouldn’t be allowed to play varsity quite frankly. He doesn’t have a lot of strength. He’s a very skinny kid...When he gets bigger and stronger those things tend to disappear.”

Berry should be able to return next week against Columbia, Murphy said.

Saturday’s match up was the first head-to-head contest between Murphy and Dartmouth coach Buddy Teevens, who have been friends since childhood. Both said they were impressed by what they saw of the other from the opposing sideline.

“It was fun,” Teevens said. “I saw him prior to the ballgame, and saw his family. It’s nice to have a friend in the league.”

“It’s nice to see him play well,” he added. “Unfortunately, it was against us.”

“Buddy’s the best coach I know,” Murphy said. “If I’m here long enough, I’ll be on the other end of one of these some day.”