Dawson has gone from chasing Harvard history to becoming it 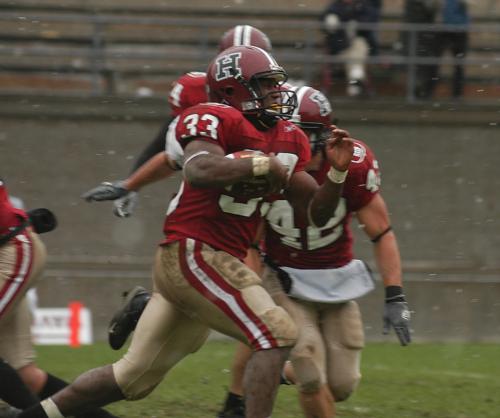 The numbers were by no means the best of his career.

Twenty-three carries, 103 yards, two touchdowns. But Saturday’s record-setting performance was vintage Clifton Dawson, from the 92-yard kickoff return to paydirt to open the second half, to the 32-yard scamper that iced Harvard’s 42-14 victory, to the grace with which he shifted much of the credit from his own shoulders to those of his offensive linemen.

Just 98 yards from writing his name into the Crimson record books once more—again supplanting Chris Menick ’00, this time for most rushing yards in school history—Dawson was almost assured of reaching the milestone Saturday, barring any uncharacteristically sound play by Dartmouth’s defense. But as the third quarter drew to a close and Dawson inched past 90 yards, the junior tailback’s chances of setting the mark at home appeared to fade.

Harvard was, after all, ahead by 28 points. Unnecessarily risking injury to the Crimson’s star would be more than a little unusual for coach Tim Murphy, who, like most of his peers, regularly pulls his skill players when leading by so wide a margin. But Murphy left Dawson in for two series in the fourth quarter, allowing him to set the new mark at 3,335 yards—courtesy of an eight-yard burst up the middle—before promptly lifting him from the game.

“I’m just very grateful to have been in the position to break that record,” Dawson said. “I’m so excited to be amongst such great tradition and history at Harvard.”

It’s a line Dawson has recycled after each of his historic performances, but it’s one that isn’t really true any more in the way it once was.

With one record to his name as an up-and-coming sophomore, Dawson was a great Harvard back among many. The same could be said after setting a second and even a third mark.

But now? He isn’t just amongst that great tradition and history. He’s its embodiment every time he steps on the field.

Not that Dawson would ever come right out and say that. The only performances he’d ever call attention to are those of his blockers, upon whom Dawson lavishes praise at the slightest prompting.

“All week, I’ve been more excited for some of the offensive linemen who are as much a part of this as I am,” Dawson said. “There are some guys—Frank Fernandez, Will Johnson, and Brian Lapham—I don’t think I’ve run a yard without them on the field, and they deserve this as much as I do.”

“Those guys deserve it,” he added. “They work extremely hard. Every game we challenge them to open holes and it really all starts with them.”

But it’s Dawson, whose mix of speed and size have plagued Ivy defenses since his rookie season, who deserves the bulk of the credit for the yards he’s accumulated, most of which have come well past the line of scrimmage.

With Harvard already ahead 28-7, Dawson took a handoff and slipped through a crease along the right side of the field. One Dartmouth defender appeared to have him wrapped up from behind, but Dawson shrugged him off before shaking a second would-be tackler and heading for the end zone 32 yards away.

Dawson was no less of a threat the one time he returned a kickoff, breaking through a seam in the Big Green formation and heading, untouched, up the sideline for a 92-yard score.

“Our special teams coach, John Butler, schemed that all week,” Murphy said. “That was the exact design.”

It wasn’t Dawson’s. None of it has been, dating back more than four years now, when he was a redshirt at Northwestern.

But, fortunately for Dawson and the Crimson, that was one plan he wouldn’t have to follow exactly.

“There’s not one day,” Dawson said, “that I don’t look back and am grateful for the decision that I made.”