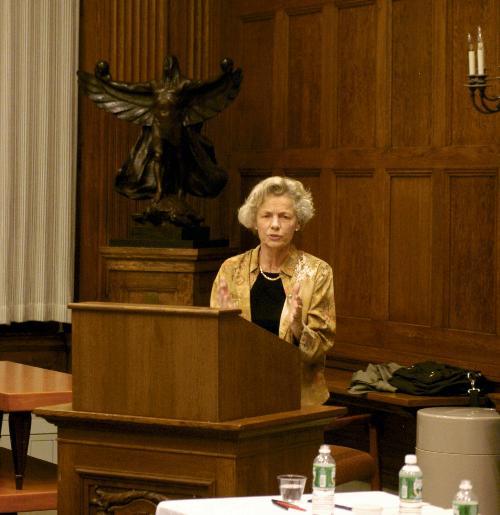 Greedy lawyers in the private transnational adoptions sector are creating unnecessary family separations, Rosa M. Ortiz, a member of the United Nations (UN) Committee on the Rights of the Child, said in a debate at Harvard last night.

Arguing against her was Elizabeth Bartholet, Wasserstein public interest professor of law, who said that the global community should promote international adoption because the children affected generally grow up in loving, healthy families, which otherwise might not be possible.

Bartholet and Ortiz made their assertions as part of a debate on the topic of transnational adoptions hosted by the Harvard University Committee on Human Rights Studies last night in the Barker Center.

“We should promote international adoption and work simultaneously to promote global justice,” said Bartholet, an adoptive parent of two Peruvian children. “We are not going to deal with the wrong of injustice and poverty by eliminating the benefit to children who do well by adoption.”

Ortiz, who worked for a variety of non-governmental organizations on children’s rights before joining the UN Committee on the Rights of the Child, said that the current problems facing transnational adoption outweigh the benefits that children may receive.

She cited unnecessary separations due to monetary incentives, lack of government oversight, and a lack of cooperation between international and domestic adoption agencies as the main flaws in the present system. Ortiz suggested that a system which involved increased government oversight and fewer separations between parents and children, such as the one in place in Paraguay, would reduce these problems.

While Bartholet also agreed that poverty is a driving factor behind women’s choices to put their children up for adoption, she said she did not believe that the adoption fee motivates women to give up their children.

“Money given to biological parents by adoptive parents rarely makes the difference in the choice whether or not to give up their child,” Bartholet said.

Bartholet cited other benefits of transnational adoption, namely that the system exposes the world to injustices and detrimental situations in other countries, such as gender discrimination in China.

“Adoption is an amazingly mind-opening experience for the parents. It makes them less racist, more globalist, and more willing to adopt even older children,” she said.

The two also discussed issues such as the age of adopted children, the importance of cultural heritage, and public versus private adoption agencies.

The debate drew a sizeable crowd, mainly of graduate students and faculty.

“I think [the debate] brought to the forefront the gravity of human rights issues related to transnational adoption. In that sense, it was very educational,” said Jane Chen, a first-year Kennedy School of Government student.