Sullivan Touts Focus on Education During Tenure as Mayor 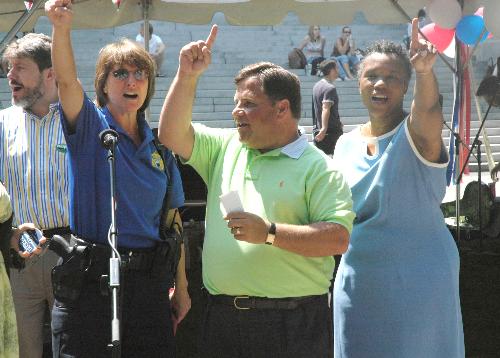 Mayor Michael A. Sullivan attends a lunch for senior citizens in Harvard’s Tercentenary Theatre on Aug. 30.  Councillor E. Denise Simmons is to the right of Sullivan.
By Anna M. Friedman, Contributing Writer

Pulling out his cell phone as if to demonstrate, Cambridge Mayor Michael A. Sullivan explains that he returns many of his phone calls in the car to maximize efficiency.

“One or two calls a day are the kind that give you a headache,” he says, outlining his routine procedure. “I return them first. Then, I return the rest.”

Sullivan, who is running for reelection to the City Council on Tuesday, says that he makes returning calls personally a hallmark of his administration in order to reinforce his connection to constituents.

“It’s not about being the politician. I actually spend time doing my homework to make things better,” says Sullivan, who is in his 12th year serving on the council.

On Tuesday, Cambridge voters will indicate whether they think Sullivan’s efforts have paid off.

Cambridge elects its nine-member City Council every two years. This year, for the second time in a row, all nine incumbents are seeking reelection.

Under Cambridge’s Plan E form of government, the councillors elect one from among their ranks to hold the largely ceremonial position of mayor, while a hired city manager runs day-to-day operations.

When Sullivan was chosen by his colleagues for a second term as mayor in January 2004, he became only the fourth major since World War II to serve consecutive terms. Council members traditionally take turns holding the position, and the process of choosing a mayor can drag on in contentious behind-the-scenes negotiations.

In 2004, several councillors who wanted to be mayor themselves ended up supporting Sullivan, because they said he could build the necessary coalition to lead the council.

And, two years later, Councillor E. Denise Simmons says that Sullivan has been a unifying force. “He’s been able to keep us a collegial body,” she says. “Things have been getting better, and he has helped that process along.”

In his four years as mayor, Sullivan says he has tried to uphold the values instilled in him by his family, which has a long history of involvement in Cambridge government. While he has focused during his tenure on making the city budget more efficient, Sullivan says that education has always been his top priority.

With reelection to the council likely, Sullivan has been mentioned as a contender for Middlesex County District Attorney, a position he previously sought. But, for now, he says his sights are set only as far as next Tuesday’s election.

Sullivan’s family, once called the “Kennedys of Cambridge,” has played an active role in city politics for decades. His father and uncle both served as mayor for a combined four terms, and Sullivan’s grandfather held a seat on the City Council more than half a century ago.

Although he says he did not grow up wanting to be mayor, Sullivan says his family inspired him to pursue a life dedicated to public service.

“I really like the idea of using the government to help people,” he says. “That’s always been my motivation.”

After attending local public schools, Sullivan majored in economics and political science at Boston College. He went on to earn a law degree from Boston College Law School.

Sullivan served as Assistant District Attorney for Middlesex County and as Assistant Attorney General for the Commonwealth of Massachusetts before his election to the City Council in 1993.

Pointing with obvious delight to the colorful student artwork that covers the walls of his office in City Hall, Sullivan calls education his top issue. One of the mayor’s major roles is to serve as chair of the School Committee.

Sullivan says that education is both the area he is most proud of improving during his administration and the area that needs the most attention today.

“When I arrived, the school system had no leadership,” Sullivan explains. “For me, it’s a travesty when kids graduate without the skills they need to work.”

His two sons attend Catholic schools, but Sullivan emphasizes that he feels a connection to the school system he attended as a child.

The mayor highlights changes during his tenure including the hiring of a new superintendent and the reaccreditation of Cambridge Rindge and Latin School, the city’s only public high school. Yet the city’s schoolchildren still ranked below the state average at all grade levels tested by the spring 2005 Massachusetts Comprehensive Assessment System, the state-mandated standardized tests.

“Our schools probably aren’t where they should be,” says Councillor Timothy J. Toomey, Jr. “We still have a long way to go.”

Education is one of many contested issues in a City Council race that pits nine challengers against nine incumbents. As a long-time council member, Sullivan’s campaign focuses on touting a proven track record, but he is also susceptible to criticism that council outsiders do not have to face.

While some challengers have lashed out at the current council for excessively burdensome tax policies, Sullivan—who previously chaired the council’s finance committee—maintains that the council has made the city budget healthier and more efficient during his tenure.

Challenger Lawrence J. Adkins contends that projects like the construction of a $50 million police station and a new library are “a waste of money.”

But Sullivan insists that Cambridge can—and must—maintain its reputation for extensive social services without straining the economy.

“This is a community that believes in human services and education,” he says. “Fifty-four percent of high school kids come from public housing—but they don’t have to pay for extracurriculars. We’ve invested in new infrastructure and built a new water plant that meets clean water demands for the next century. We have a new public library. That’s investing in the future.”

Sullivan adds that he believes the money the city collects in taxes is well spent.

“We watch the budget in a way that people actually get something in exchange for their tax dollars. People are getting value in that dollar—we’re not wasting it,” he says.

The mayor includes zoning laws that improve the environment and measures that make housing more affordable among his other accomplishments in office.

Sullivan also says that the city’s relations with Harvard have improved under his watch. In February, Harvard reached a new deal with the city under which it will increase the voluntary payments it makes to compensate for its tax-exempt status.

Although Harvard will shell out about $2.4 million in 2006 under the new deal, Sullivan says he would work, if reelected to the council, toward convincing the state legislature to rescind Harvard’s tax exemption, calling it a matter of “fairness and equity.”

Nonetheless, Sullivan says that Cambridge has begun to take better advantage of the resources Harvard has to offer in areas like education and economic development.

Overall, he says of the town-gown relationship, “Now we’re having dialogue together. We’re better at sharing plans.”

LOOKING TO THE FUTURE

In the final stretch before Tuesday’s election, Sullivan says his chief campaign strategy is honesty and openness.

“I’m upfront and honest with people....When I come to a final decision it is based on listening to people, so I have nothing to be ashamed of,” he says.

But despite the election debates and luncheons that have been added to his schedule recently, the mayor says that the campaign does not drastically change his routine.

“For me, campaigning is 365 days a year. Every day is election day for me,” says Sullivan.

Sullivan has been mentioned as a contender for the district attorney position now held by Martha Coakley, who is running for state attorney general. Sullivan, a Democrat, unsuccessfully ran for the office against Coakley in 1998.

Sullivan does not rule out the possibility of eventually moving on to other elected positions, but for now he says he is focused on the council race.

“I see myself being here for quite some time, if I’m fortunate to get reelected,” he says. “Somewhere down the road I may run for something else, but I want to continue to make government effective and make a difference.”