DAY IN THE LIFE: How Steven Pinker Works

On-campus and off, Pinker known for bestselling books and striking hair 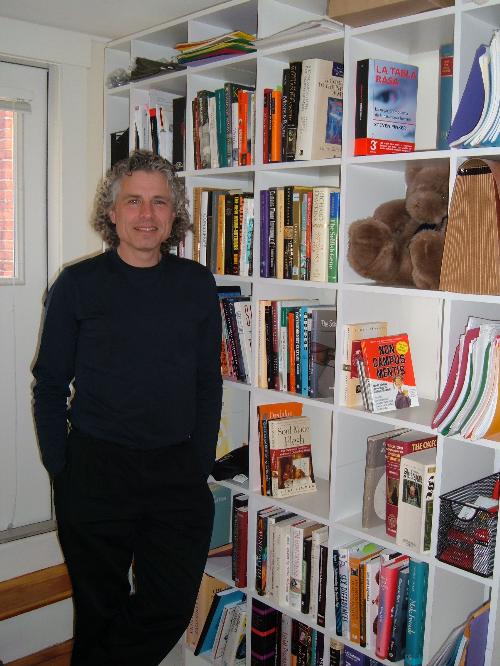 He may have been named one of Time magazine’s 100 most influential people, but Johnstone Family Professor of Psychology Steven Pinker says he’s still a little surprised when people stop him on the street to ask for an autograph.

While students and admirers may know him for his rock-star mane; his popular Core course, Science B-62, “The Human Mind”; and his bestselling books on human nature and cognition, Pinker is currently addressing more mundane matters.

It’s the evening of Oct. 31, and, between giving lectures, writing an article for Slate magazine, and attending book release parties, Pinker needs to pay his bills.

“I pay them online,” he says reassuringly.

As the author of books including “The Blank Slate” and “How The Mind Works,” Pinker says fame is the least of his worries.

“I enjoy it, but I don’t take it too seriously,” he says of his status as a household name.

Since his well publicized move from MIT to Harvard in 2003, Pinker has settled into life on the west side of Cambridge.

He has a tidy, two-floor apartment in a quiet neighborhood just a short walk from Harvard Yard, and his walls are decorated with his own landscape photography and expanses of shelves filled with books, art, and the occasional stuffed animal.

Pinker is foregoing teaching this semester to spend time writing his new book, tentatively titled “The Stuff of Thought: Language as a Window into Human Nature,” but his presence still looms large on campus.

On the 13th floor of William James Hall on Monday afternoon, he delivers a proseminar lecture on his research interests to a small group of graduate students, a process commonly known as “professors on parade.”

With rapid-fire Powerpoint slides and gentle jabs at the language errors of everyone from toddlers to Bill Clinton, Pinker’s two-hour lecture on his research into the composition of language goes down much easier than one would expect.

He aims to entertain, he says later, in part because “it’s demoralizing to see heads fall over” in class.

A self-described “control freak” about his teaching, Pinker writes his own tests and oversees the grade distribution for his Core course, which enrolled more than 250 students last spring.

One surprise that awaited him at Harvard, he says, was the level of work that students expected—less rigorous than at MIT.

“Coursework which is routine at MIT is considered onerous at Harvard,” he says.

But he also reports that Harvard students are more broad in their academic interests and are eager to get to know him.

“I get invited to a lot of faculty dinners,” he says.

During the uproar over University President Lawrence H. Summer’s remarks on women in science last January, Pinker’s voice mail was flooded with requests for interviews. He says he was selective in granting them, and even turned down an opportunity to appear on “The Charlie Rose Show” because the taping conflicted with the time of his class.

Outside the classroom, Pinker’s life is a balance of work and pleasure, though the two often overlap.

After the graduate proseminar, Pinker’s girlfriend, Rebecca Goldstein, a visiting philosophy professor at Trinity College in Hartford, Conn., and a well-known scholar herself, picks him up for a book party hosted by advice columnist Margo Howard of “Dear Prudence” fame.

The couple have had a scholarly romance, which began when Pinker cited Goldstein’s correct use of the irregular past tense of the verb “to stride” in one of his books.

Goldstein read the citation and wrote him an e-mail, starting a dialogue which has continued ever since.

But it’s a wonder the two have any time to themselves.

In the span of five days, Pinker needs to give his final input into the Curricular Review report on general education, fly to London, Ontario, to deliver a talk, lead a discussion on a play about cloning, and get a significant amount of writing done.

He contributes anywhere from five to 10 pieces of writing to journals and publications per year, and says that he currently responds to between 20 and 40 e-mails a day.

His ideal working system is to “get up, write, and keep writing till I go to bed,” he says, though it seems this rarely happens.

When he needs a break from his busy schedule, he says retreats to his home on Cape Cod and indulges in his hobbies, which include photography, kayaking, biking, and hiking.

THE CULT OF STEVE

Despite his low-key personality, Steven Pinker is a national figure, and his name has been used in comic strips and on websites (he says he’s a proud member of the “Luxuriant Flowing Hair Club For Scientists”).

But while appearances on “The Daily Show” may win extra points with his students, Pinker says his focus is on making contributions to the field of psychology.

“I was always interested in questions of human nature,” he says. “[Psychology] is a discipline where you can test propositions empirically.”

—Staff writer Kristin E. Blagg can be reached at kblagg@fas.harvard.edu.