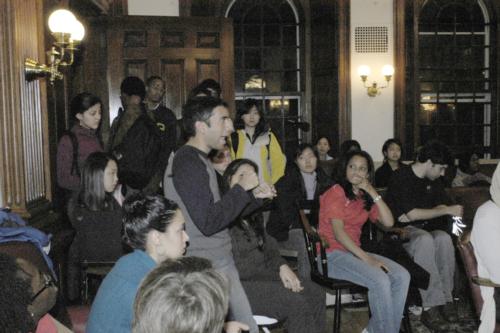 Leaders of the Salient, The Crimson, the Islamic Society, and other groups discuss bias in campus media at a town hall meeting last night.
By Anupriya Singhal, Contributing Writer

Harvard students engaged in a heated discussion about the issue of ethnic and multicultural sensitivity in campus publications yesterday, in an event sponsored by the Harvard Foundation for Intercultural and Race Relations.

The discussion was held in response to a parody ad published by The Salient, which was considered offensive by many members of the Muslim community, according to the Foundation. The ad featured the Fulla doll, a Barbie alternative popular throughout the Islamic world. The ad boasted of the doll’s “Muslim Values” and touted fake programmed phrases such as “Yes, Husband” and “Human Rights? That’s silly.”

The editor of The Salient, Travis R. Kavulla ’06, was present at the discussion, along with leaders of other student groups, such as Khalid Yasin ’07, the president of the Harvard Islamic Society.

Many Islamic students spoke out against the portrayal of the Fulla doll.

Tariq N. Ali ’09 said the advertisement’s major fault was the generalization it made about the Muslim community.

“I don’t understand how the wearing of Muslim garb can be equated to a lack of respect for human rights,” he said.

Other students worried that the ad misrepresented Islamic views as far more radical than they are.

“Islamic values are misunderstood,” said Nura Hossainzadeh ’06. “As an American-born Muslim, my personal values are not so different from Western values.”

Kavulla, who is also a Crimson editor, was one of the few students who spoke in defense of the advertisement.

“The notion of parody is that objects have multiple meanings, and this quality would be lost with caveats and disclaimers. The doll, which was rooted in the representation of Muslim values, was simply a recognition of the ludicrous things that happen in society,” he said.

Yasin spoke about the tangible effect of prejudices that are expressed in publications, addressing the incident of a racially motivated verbal attack against a female Muslim student that occurred last week.

Many students expressed the view that the goal of freedom of speech is tolerance, but not sensitivity. They said it is the job of the individual reader to judge what he or she reads.

As the discussion broadened to focus on journalistic ethics and standards, Owais Siddiqui ’07, who helped to organize the event, said he has observed bias in many student publications, such as The Crimson and The Independent.

“Having many people with different background experiences cover the same event may help to prevent distortion of events,” he said.

Crimson President Lauren A.E. Schuker ’06 and Managing Editor Stephen M. Marks ’06 discussed the separation of the paper’s News and Editorial Boards and the publication’s commitment to “fair and balanced” reporting.

Members of the Foundation said they were pleased with the way the event progressed.

“I think our Faculty can be proud of the way that the students comported themselves tonight in discussing difficult and important issues of our times,” said S. Allen Counter, director of the Harvard Foundation.

“I wish we had more time to talk about the line between humor and offense. I don’t think we fully explored who is allowed to use it and in what context,” said Kathleen E. McKee ’06, a member of the Foundation and one of moderators of the discussion.

Hossainzadeh, who is also a Crimson editor, said the debate was a useful exercise.

“I am glad that there are publications like The Salient to make conservative viewpoints known,” she said. “What bothers me is when they cross the line between legitimate discussion and the generalization of misunderstood values,” she said.