Back from Doldrums, Crimson Goes West 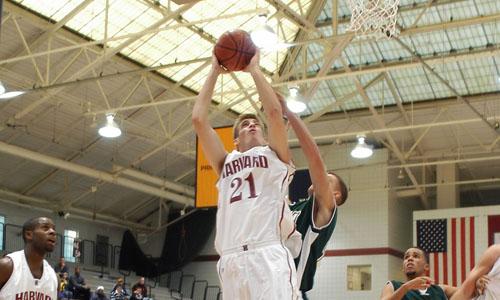 In a season of ups and downs, and on the heels of a slump-busting win against LIU, the Harvard men’s basketball team will try to beat another New York state team in a game that could send it soaring or reeling.

The responsibilty to defend will fall on the Crimson’s surprising backcourt, which again rose to the occasion on Wednesday night.

“The guards, they’ve taken a lot of heat and had to put a lot of pressure on, but they’ve done a good job thus far,” said captain forward Matt Stehle. “And they’re going to have to step up like they did [against LIU].”

Although Albany has a losing record, Harvard head coach Frank Sullivan said that they might be one of the best teams Harvard has met. The Great Danes have played only one home game and against some very tough teams, including national powerhouses Florida and UCLA, as well as San Diego State and Cleveland State.

Albany boasts two extremely talented guards, Jamar Wilson and Lucious Jordan, both of whom have topped 1,000 career points. Jordan has had a down year this year, averaging only 6.3 points a game, but another guard, Jon Iati, has stepped up in his stead, averaging 12.4 points per game.

Sullivan said Albany’s “individual skill level” is one of its greatest assets.

“They’ve got the right pieces at every position,” he said. “They’ve got speed at the one with Wilson, and quickness—Iati can really shoot at the two. Levine is like a classic three man, putting the ball on the floor. And the fours and fives: one’s a shooter, [Brent] Wilson, and the big guy, [senior Kirsten Zoellner] is just a real big center. And they’ve got depth off the bench as well. Excellent talent.”

Speaking of Zoellner, the big guy is 7’1, and a tough target for anybody to guard. Un-fortunately, Brian Cusworth, Harvard’s 7’0 center, will miss another game with a hand fracture. Stehle, at 6’8, will have to take on the big man.

“We’ll certainly emphasize getting help to him,” Sullivan said. “The idea of keeping the ball out of the low post has three different dimensions. Number one: it’s ball pressure. Number two is the footwork of the guy guarding the post, and number three is to help defenders, being in positions to rotate to lob passes.”

Stehle is Harvard’s leading scorer, with 15.7 points per game. He is extremely valuable to the team, but will have to stay out of foul trouble, as two quick fouls at the beginning of the game against LIU brought him out of the game early. The team struggled without him on the court.

Michael Beal has scored 8.6 points per game, but Sullivan felt like he would be of great defensive value on Saturday’s game. Beal is second in total rebounds, at 58, with 41 of them coming on the defensive end. He will be instrumental in stopping Albany’s strong guards, especially Wilson.

“[Beal has] got a good sense of understanding concepts going into games—he knows how to implement those things,” Sullivan said. “Mike has the size, which is important to being a defensive stopper, he has the experience, and he has the quickness.”

The Crimson will have to rely on quick defensive skills at the guard position, where Albany’s Wilson will be explosive and powerful. He won’t necessarily look for the outside shot, but he may kick it out to Iati, who can shoot the ball well.

Harvard will have to ride Stehle’s leadership, if he can stay on the court and out of foul trouble. High scorers like Jim Goffredo, who has averaged 14.3 points per game and shot 41.3 percent from the field, will have to continue their strong early-season performaces.

Tip-off at Albany will be at 2 p.m. tomorrow.