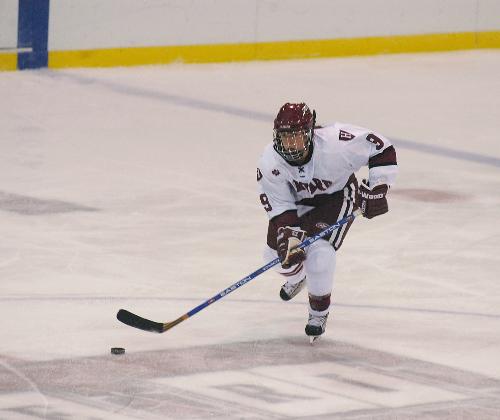 Last year, in Harvard’s first meeting with Dartmouth, number nine netted a hat trick to propel the Crimson to a dramatic win.

Last night, as Harvard squared off against the Big Green for the first time this season, number nine again rose to the challenge of the rivalry game and picked up a hat trick in an important victory.

The results were the same, the sweater was the same, but the skater wearing it was not.

Last Feb. 5 in Hanover, N.H., it was record-setting superstar Nicole Corriero ’05 potting five goals to push the Crimson past Dartmouth. But last night it was the new addition, freshman Jenny Brine, who inherited the digit shining with a three-goal performance in a thorough 4-1 conquest of the Big Green.

Luck, though, is only part of the story.

“I guess it’s luck too,” Brine said. “But you have to know where the bounces are going to come from and be able to read what your linemates are going to do with the puck.”

For sixty minutes last night, Brine was in perfect sync with her linemates, despite making her first appearance on the unit. A fortuitous move onto the top line for last night’s game, swapping places with fellow frosh Sarah Wilson, teamed Brine with senior Jennifer Raimondi and junior Katie Johnston and set the first-year forward up for the trio of scores.

“We switched up the lines,” Harvard coach Katey Stone said. “There seems to be some good chemistry, just a better dynamic. I think she’s in the right place. You constantly tweak things until you feel like they complement each other.”

The complement was productive as well as cohesive, keying the Crimson offense throughout the convincing win.

“It was my first chance to work with [Raimondi] and [Johnston] and I think our line clicked really well tonight,” Brine said.

“Johnston was cycling down low and putting the puck on net.”

On all three goals, Brine displayed her deft touch around the goal and penchant for cleaning up rebounds and putting them in the back of the net.

“She’s really good down low,” Stone said. “She’s a very smart player. She knows how to anticipate where the puck is going to go.”

On the first score, she tucked the rebound from a Johnston offering away inside the right post. On her second goal, a power-play tally, after Dartmouth netminder Kate Lane made a kick save on Wilson, Brine gathered another rebound and threw the puck blindly on net. Lane was screened on the play and the puck eluded her for the eventual game-winner.

“We were joking on the bench that she should have bought a raffle ticket,” Johnston said of Brine’s good fortune.

The final goal, less than two minutes later, was the most hectic of the evening. With Raimondi streaking up the right side, Brine joined the rush for a 2-on-1. Raimondi sent a crisp cross-ice pass over onto the stick of Brine, whose forward momentum carried her into Lane and rolled the puck over the line for the hat trick clincher. For plays like these, and her success with rebounds, Brine deflected praise onto her new running mates.

“Just in the right place at the right time, able to thwack them home,” Brine said. “Basically just hard work from my linemates.”

Brine (8-6-14) now ranks 11th in goals per game and 16th in points per game among freshmen nationally.

Although the Corriero comparisons carry with them the weight of expectation, and eight goals is far short of Corriero’s landmark 59 last season, Brine doesn’t necessarily shy away from the association.

“Corriero was a great player,” Brine said. “It’s nice to follow along wearing her jersey.”

Now she hopes to follow along scoring hat tricks.

—Staff writer Jonathan Lehman can be reached at jlehman@fas.harvard.edu.